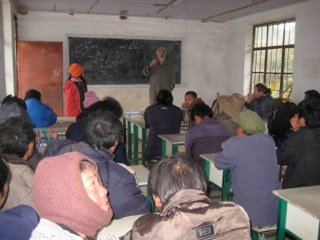 Casa Ricci Social Services is a Jesuit social services organization based in Macau.  Its main mission is to serve leprosy and HIV-AIDS infected and affected people in Mainland China.  The main goal of our service is to work with individuals and communities to understand and heal the different wounds that discrimination and marginalization cause in their individual and social life.

During the last 10 years of working with and in these communities, we learnt that discrimination results in isolation, which not only affects their bodies (physical disabilities), but also distort the way they understand and relate to themselves and to others, together with the way they relate with their natural environment.

In one leprosy village in south China, we started 10 years ago taking care of the elderly and the sick.  Some years ago, we worked with the younger members of the community, organizing credit unions with them to contribute to their economic development.  During this process, members of the community discovered that credit unions would never flourish and economic development would never be achieved, unless they overcome the egoism and dependency they learnt from their history of isolation and discrimination.  It was then when we decided to start a value education program, where members of the community re-learnt values such as peace, cooperation, and simplicity.

One year ago, a big drought in the area helped them rediscover water as a precious natural but limited resource.  They found out that the lack of water was endangering their livelihoods and the future of their children.  So they wanted to start to learn how to manage water in a responsible way.  Thanks to our cooperation with the environment team from the Jesuit Conference of Asia Pacific, a group of villagers started to learn how to map their land and their water resources.  After doing the mapping, they found out how they depend on water sources that were mostly located in a neighboring village.  They also discovered that these water sources were endangered by the bad relations they have with that village, as both villages were cutting trees in “the other” village land, thinking that the cutting will not affect them, but “the others.”

This was the first time they discovered that the respect and need of the “other” to achieve a sustainable life is not limited to their own community, but should be extended to include their neighbor villages as well.  By rediscovering water as a communal resource, they found that reconciliation with others and respect and responsibility for others and their land, should regulate not only their own community life, but their relations with other communities as well.  In other words, people in the village started to learn how reconciliation with creation requires also reconciliation within themselves and other communities as well.