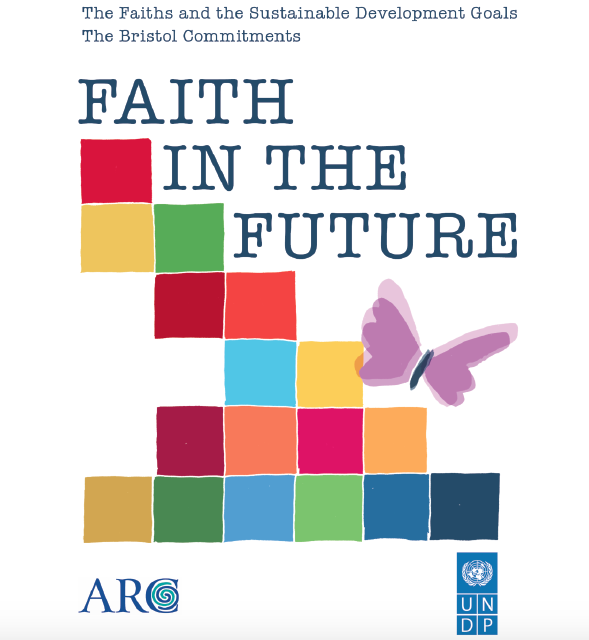 The Society of Jesus, through its Social Justice and Ecology Secretariat (SJES), joined two global meetings last September that explored ways by which faith-based communities and religious institutions can respond to the UN Sustainable Development Goals (SDGs), getting known more now as the Global Goals.

Patxi Álvarez de los Mozos, SJ, SJES Director, joined the UN Bristol Meeting on Faiths and the SDGs  where faith leaders from around the world and UN officials gathered in Bristol, United Kingdom from 7 to 10 September 2015 to discuss support for the SDGs. The Bristol Commitments emerged from this gathering and was launched as a publication entitled Faith in the Future that covered a range of practical action plans of 24 faith groups and faith-based organizations, sharing an outline of their 10-year faith plans and commitments, including that of the Society of Jesus.

The Bristol meeting was organized by the Alliance of Religions and Conservation, a secular organization that helps the world’s major faiths develop environmental programs based on their own core teachings, beliefs and practices, and in association with the UN Development Programme.

Patxi also joined about 80 representatives of faith-based organizations to explore ways to end extreme poverty and advance the SDGs in an event  hosted by the World Council of Churches  on 24 September 2015 at the Church Center for the United Nations in New York, USA. In this meeting, the Faith-based Action Framework to End Extreme Poverty was launched that builds on a joint statement and call to action entitled Ending Extreme Poverty: A Moral and Spiritual Imperative  launched in April 2015 and signed by 39 leaders of major world religions and global faith-based organizations.

In a brief interview with Paula Sendín from Ecojesuit, Patxi shares his thoughts on the faith-based global action that is gaining traction and the sincere desire to advance the Global Goals through environmental programs and the moral and spiritual imperative to end extreme poverty.

What was the purpose of the meetings?

The principal purpose of the Bristol meeting was to decide how institutions from different religions can contribute to the SDGs. We met with Buddhism, Confucianism, Christian, Daoist, Hindu, Islam, Judaism, Sikhism and Shinto groups that represented 24 belief traditions from around the world, and most are working in the area of the environment. The New York event was focused on ending extreme poverty and advancing the SDGs.

With the post-2015 development agenda now adopted by the UN and world leaders, what are your thoughts on the SDGs and the challenges to these global goals?

The newly adopted SDGs present more solid basis and are based on the experiences gained in the last 15 years with the Millennium Development Goals (MDGs) that helped the international community better focus their responses and efforts to some important development concerns. National plans need be developed to address and localize the SDGs.

I highlight two challenges. First is the high number of SDGs – there are 17 objectives and 169 targets – and this could lead to a loss of focus. The identification of many targets does not favor an overview, which is necessary. Second, funding is a key element that mainly comes from international solidarity. The countries facing the greatest challenges are also the poorest and need adequate financing. The recent UN Conference on Financing for Development in Addis Ababa last July concluded with very poor results, and this is indicative that poor countries will get very little support.

Why is the UN interested in religions and faith-based communities taking part in the global development discussion?

For far too long in the scope of civil society, religions were considered as serious obstacles to social progress and emancipation of people and were part of the problem. But today, the UN recognizes and acknowledges an increasing awareness that religious institutions have been working for decades in key areas of development and helping those identified by the UN as key development concerns. So, they are essential now and are part of the solution.

UNICEF indicated that religious communities run 50% of schools in the world. Similarly, in the fields of health, childcare, local development, and other development assistance, religious and faith-based communities provide a significant contribution. And while development programs have technical objectives that can be satisfactorily achieved with funding and technology, there is a growing number of people in the UN who realize the need to incorporate values, personal commitment, and local participation, which is what religious organizations and faith-based communities bring about.

Even the World Bank realizes that social movements need to be developed by supporting and revitalizing them. These movements have the ability to influence people, especially the advocacy of religious movements. Better engagement between markets, civil society, and the state contributes to sustainable development. In civil society, religious institutions play a key role.

What contributions can religions make in the framework of the newly adopted SDGs?

Religions contribute to a social organization through their values, perseverance, and long-term commitments. They come closest to the face of the poorest because they work with them. Furthermore, religions exemplify simple lifestyles, as many are facing what may be called “shared austerity,” living simply, having less consumerist lifestyles, and sharing the goods of the earth within reach for everyone. These are key today. Their motivations are primarily spiritual and not just moral or cognitive.

The SDGs maybe new for some international civil society groups, but these are not new to many religious institutions. They have been working in these areas for many years and continue to do so with or without the SDGs.

Where is the Catholic Church in this context?

The Catholic Church already plays an important role and its work in the social and ecological field is very wide, both through parishes such as Caritas and through the social works of religious congregations and international NGOs. The activities of recent Popes, and especially Pope Francis, show that moral leadership can do much to mobilize the international community towards the advancement of human dignity.

The Catholic Church can also play an important role in establishing collaboration with other faiths in these fields of both poverty and inequality and environmental advocacy. I think in all of these areas the Catholic Church is already making important contributions.

What difficulties are churches experiencing in addressing the development challenges?

A high degree of collaboration is necessary in pursuing development work and churches can sometimes have misgivings about being co-opted by states or other large organizations. These fears may indeed be valid in some cases. But without broad partnerships, it will not be possible to address development challenges.

Sometimes churches have difficulty accepting that their activities require audits and evaluations. But development work is not only about doing good, but also being able to make a real impact on people’s lives. Good intentions are not enough, these need to be accompanied by levels of competence and professionalism. The world is very complex and requires serious and well-thought out and implemented solutions, and sometimes we are not always well-prepared.

Do you think the Society of Jesus is well placed to address these concerns? What should it do to better respond to the urgent needs?

I think the Society of Jesus is well positioned in responding to these concerns, but obviously we still have much room for improvement especially in international cooperation. A greater collaboration within the Society between the work and the Provinces will enable us to do better work in our mission and to ensure greater impact. The most favorable areas for this collaboration are the reflection and academic research, public awareness and advocacy campaigns. For this, we need to enhance the awareness of the importance of making progress in these areas, and a structure that supports the activities that need to be implemented.