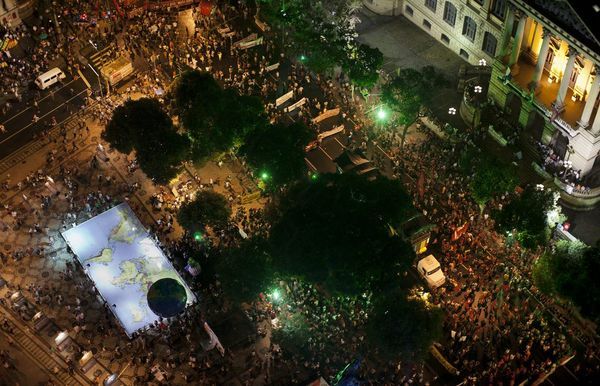 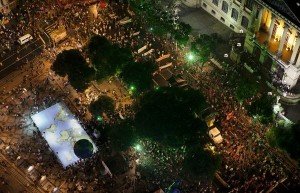 On the afternoon of Wednesday 20th June, thousands of people gathered in the center of Rio de Janeiro for the Global March, organized by the “People’s Summit in Rio+20 for Social and Environmental Justice,” an event organized by global civil society.  Certainly, the Global March was not homogeneous, it is characterized more as a “crowd,” in the sense coined by philosophers Antonio Negri and Michael Hardt.  A true plurality, perhaps a characteristic of an affluent society.

It was a demonstration that expressed the strategic dilemmas posed to humanity, seeking to find alternatives to global capitalism, advancing the critique of civilization existing model, seeking to express the will of a more balanced relationship with nature.  Moreover, it was well demonstrated by Edgar Morin to express that “our time for change has become an epochal change.”

One way to better understand the diversity of the march, its plurality, is to try to listen and observe the different individuals who participated.

Idón Moisés Chivi Vargas (from Bolivia and a member of the Aymara people from the Andes and Altiplano regions of South America) shows the difference between the People’s Summit and his march compared with Rio+20, as he vehemently said, “Official Rio+20 is just deciding the color of the ink pen that will sign the death certificate of the planet.  Even small countries try to change that, what will be decided there is only the color of ink.  Instead of the Summit, this March is the expression of diversity that is brought to us by Mother Earth.  It is a movement of life, it’s about its possibilities.”

The Xavante indigenous people of Marãiwatsédé, from the state of Mato Grosso in the Amazon, danced, sang, and protested throughout the march.  According to Arimathea, a Xavante, the land was demarcated and recognized 20 years ago, but farmers still occupy them.  He claims not to understand what happens with the Brazilian justice system in relation to the Xavante Indians, their tribe.

Also in the form of song and dance, members of the Samba School of the community of Vigário Geral in Rio de Janeiro, supported the march and spread the message of a project begun in Germany, the Bread Tank, a tank made of bread, which supports the redirection of military investment to food.

You can add to these demonstrators the speech of Mr. Adán, who comes from the costal region of Baixada Fluminense in Rio de Janeiro.  He is a doorman at an office building and he stood in the doorway of the building he works in, watching the demonstration.  Asked about his thoughts of the march that was going on, he declared, “They should do it more often.  Doesn’t matter the mess.  If you do not make noise, nobody notices.  Hence the government is put in trouble.  I do not care if they stop the traffic and the city.  They have to do something.  Corruption, pollution, low wages, everything has to change.”

Added to this diversity of expressions, demonstrators related to gender, freedom of sexual orientation, against the media influence that leads to consumerism in children, violence in the countryside, animal rights, the vegan movement, among many other projects.  And if this diversity of actors, movements, perspectives (which have in common a desire for a different society) was not enough, joining the march were federal employees and three other trade union groups, who were on strike.

These diverse proposals, often unprepared in their protests, point to several initiatives.  Some are small, local, complex but perhaps could result in significant changes.  The truth is that the march sought to be a counterpoint to the official Rio+20.  As Zygmunt Bauman, a Polish sociologist, emphasizes, “the new is in dispute and from this dispute it will be born, or not, an emancipator project.”

The authors are from the Instituto Humanitas Unisinos, a Jesuit university.