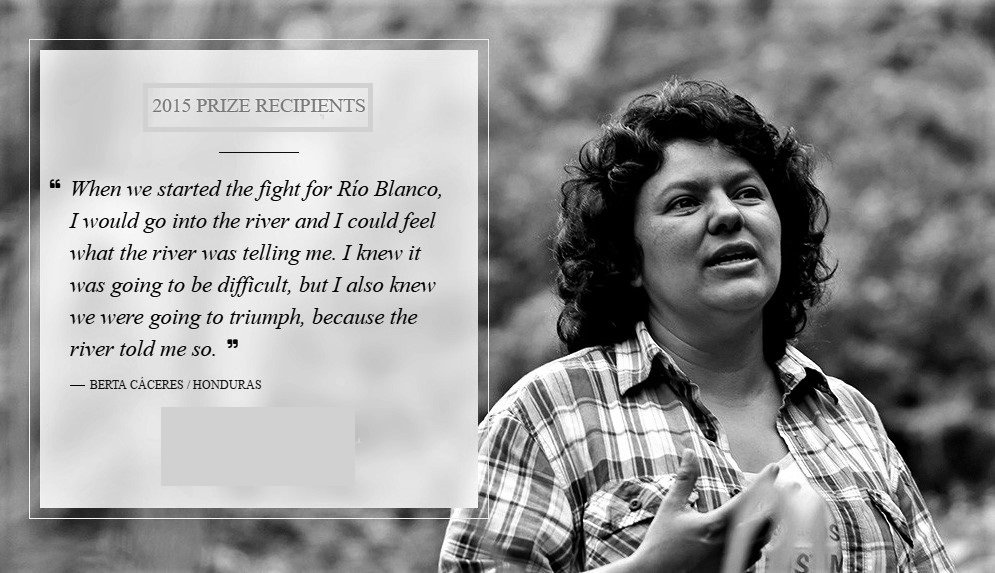 On Dangerous Ground  is the latest report from Global Witness  that documented 185 murders of people defending their land, forests, and rivers in 16 countries in 2015 alone, “by far the highest annual death toll on record and more than double the number of journalists killed in the same period.”

In recent years, the number of environmental activists who lost their lives in their struggle to protect the environment and biodiversity in Honduras in Central America has increased and is one of the most dangerous countries to defend the environment against powerful interests and the aggressiveness with which certain activities cause environmental destruction.

Honduras is a killing field for combating climate change and protecting the environment.  Battling corporate powers to protect the rights of Indigenous Peoples is a high-risk activity.  Global Witness reports that for the five years ending in 2014, more than 450 were killed and more than half were in Honduras and Brazil, and in Honduras alone, 114 environmentalists were killed in a little more than a decade.

Berta Cáceres was murdered in her home in La Esperanza, Intibucá in western Honduras, despite protective measures.  She was an environmentalist and general coordinator of the Consejo Cívico de Organizaciones Populares e Indígenas de Honduras (or Council of Popular and Indigenous Organizations of Honduras in English).  Berta was a 2015 Goldman Environmental Prize recipient  for her work and leadership in rallying the “indigenous Lenca people of Honduras and waging a grassroots campaign that successfully pressured the world’s largest dam builder to pull out of the Agua Zarca Dam.”

Berta opposed the construction of the hydroelectric project Agua Zarca on Río Gualcarque, a river considered sacred by her people, and that threatened their community.  The project is one of Central America’s biggest hydropower investments and involves a cascade of four dams in the Gualcarque river basin, one of which is the Agua Zarca dam.  The suspicions turned immediately to her struggle in the last three years with the local firm Desarollos Energéticos, SA (DESA) as she received death threats, attempts at blackmail, and intimidation.  Berta knew that the battle against the dam put her in the spotlight.

DESA-Agua Zarca threatens the natural riverbed that is a sacred place for the indigenous Lenca and is destroying this unique ecosystem.  To prevent this damaging action, Berta Cáceres took the initiative to mobilize the Lenca people and gave an international dimension to the fight, confronting powerful financial and political forces in Central America.  The public campaign prompted the withdrawal of the Chinese company and the World Bank as major finance partners of the project.  Finally, only the Honduran DESA remained to continue with the project.

International pressure and the presence of a witness at Berta’s murder, the Mexican activist Gustavo Castro, facilitated the resolution of the crime.  Last May, a DESA senior executive and the company’s security chief, together with a retired Army official and two hitmen were arrested and sent to trial for Berta’s murder.

Father Ismael Moreno, SJ (known to many as Father Melo) knew Berta Cáceres very well and they shared many moments of public action in front of big companies or the Honduran government.  Father Melo is the director of Radio Progreso, a well-known broadcasting station in Honduras that strongly supports concerns of indigenous communities and publicly denounces violations of human rights.  In March 2014, one of its staff, journalist Carlos Mejía Orellana, was killed because of the positions taken by Radio Progreso.  Ecojesuit previously featured a story on understanding the impact of mining in Honduras.

Father Melo wrote a moving testimony  on the occasion of Berta’s death:

“She grew up sharing the tortilla and the coffee, the tamal and the copal, with the Lenca people.  Her love for the people began when she was in her mother’s womb and so rooted was her love that Berta was incorruptible.  No one could buy her, no one could tame her and therefore, they had to kill her.  Without this primordial mystical, without that essential love, a person can be bribed, tamed, and bought.  Even clear ideas, precise concepts, and reasonable political positions do not guarantee fidelity to the poorest.  Only a life lived in complete involvement with and love for people can guarantee that the fight is transformed into a never-ending passion.  That’s why she was killed. That is the legacy Berta left us.”