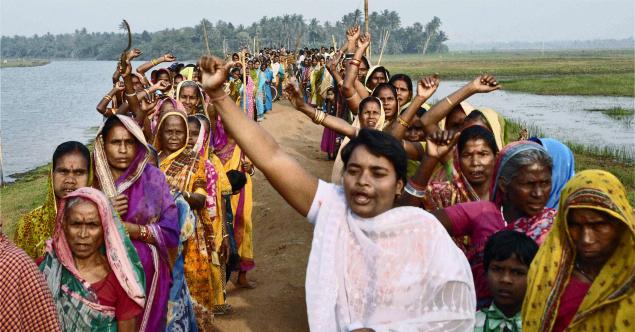 Land grabbing in Orissa, on the east coast of India, started in July 1991 after liberalization, and will be its 20th anniversary this July. There was much land acquisition before liberalization, the background of which was the debt crisis of the first Gulf War in Iraq. The economy was opened up without any preparation and the private sector wanted land in different ways.

There was the land wanted for mining in the tribal areas to the massive dams in the northeast, and all of this was tribal land. Then there are the special economic zones that have in practice become a massive land grabbing exercise for real estate speculation. This land speculation and the law only requires that special economic zones build on 50% of land for productive purposes, and each company can take up to 5,000 hectares. About 347 of them have been sanctioned already, but the law does not say what the other 50% is to be used for, whether for golf links, for five-star hotels, or for other speculation of a similar nature.

What has happened in Orissa is precisely that Posco India Private Limited talks in terms of a special economic zone, rather than an industry. Posco India Private Limited is a subsidiary of Posco, the world’s fourth largest steel producer. In June 2005, the government of Orissa signed a Memorandum of Understanding to set up a 12 million tonnes per annum (MTPA) steel plant near Paradip, Jagatsinghpur District with an estimated investment of US$12 billion. For the first phase, Posco will build a steel plant with a four MTPA capacity and expand to 12 MTPA.

People were being stopped from accessing the land and people resisted, saying that they are not getting out of their area. And this is happening again and again in major areas today. There are three major sectors taking land: mining, special economic zones, and highways. I am not sure India needs the building of six-lane highways, when there is a good railway system that we could use to the maximum. It takes less land and is less polluting. But then the whole investment is on private transportation, cars, and that is the whole profit orientation.

Communities have to intensify the struggle, and they are going to do that. They will not let company interests take their land, because people are determined not to lose their land. Their slogan is “we are ready to give our life, but not our land,” because without that land they are finished.

Land is their identity, their economy, their culture; and they have no other resource. Also, much of that land is what is called common land, without individual titles, but belonging to the community. But the colonial law of 150 years ago continues to be enforced and recognizes only individual ownership. So all the community land on which these people lived for a thousand years before the colonial law came into force is considered state property. And that’s the irony of it all, as this is called eminent domain.

I live in the northeast of India, were 48 massive hydroelectrical dams are being planned. The same area is also one of the 25 mega biodiversity regions in the world. What happens is that peoples’ livelihoods and the environment lose totally.

Today there is a lot of speculation about energy and this is not very well worked out. They just want to turn the northeast into a powerhouse for the rest of India and for Southeast Asia, one more raw material to be exported.

The resistance is strong in many areas. But then there is a difference in Orissa as these are small farmers and tribals who will lose everything, given the laws of the land. While there is a massive resistance in Uttar Pradesh and the north, they may get over it through higher compensation. A big farmer can manage, but what happens to the rest?

Community land in a village does not just belong to individual property owners. It is the livelihood of the agricultural workers and all the service providers and all these are ignored completely. The new law introduced in the parliament speaks only of compensation. Compensation goes to the owner and these people are not seen as the owner. What about the community land, which probably accounts for two-thirds of the livelihood dependents, as only one-third is owned?

All that people can do is to clearly spread the message when these things happen. Let the truth be known that this is a massive land scam, a massive scandal, and this cannot continue. They are going to resist and there are going to be massacres. What is deeply regrettable is that more and more criminal elements will take over. The private sector depends very much on the criminal elements and it’s very difficult to deal with them. But the people are trying to do precisely that.

The poorest are suffering the most. They compose 80% of those displaced. I have come to a figure of 60 million who have lost their livelihoods from 1947, the year of independence, to 2004, about 57 years. Now 80% of them belong to the rural category who get nothing.

That is why I keep asking the questions “uprooted for whose benefit?” In other words, we have a situation of an internal colonialism in which the poor pay the price for the benefit of the middle class, and the middle class is becoming extremely selfish with liberalization. With the consumerist economy, they could not care less for the poverty it causes. And that goes together with criminalization on one side and fundamentalism on the other, because as the middle class loses its social concern, that vacuum is being filled by new religious fundamentalist identity. So fundamentalism, criminalization, and liberalization go hand in hand, that is something we rarely realize.

Dr. Walter Fernandes is a Jesuit sociologist who has studied tribal, gender, and livelihood issues for four decades of his professional life. He was the former Director of North Eastern Social Research Centre in Guwahati, India and is a wel-known scholar on issues concerning development-induced displacement. Last 19 June 2011, Pedro Walpole interviewed Dr Fernandes when they met in Cambodia.

One thought on “India’s massive land scam: An interview with Dr. Walter Fernandes”