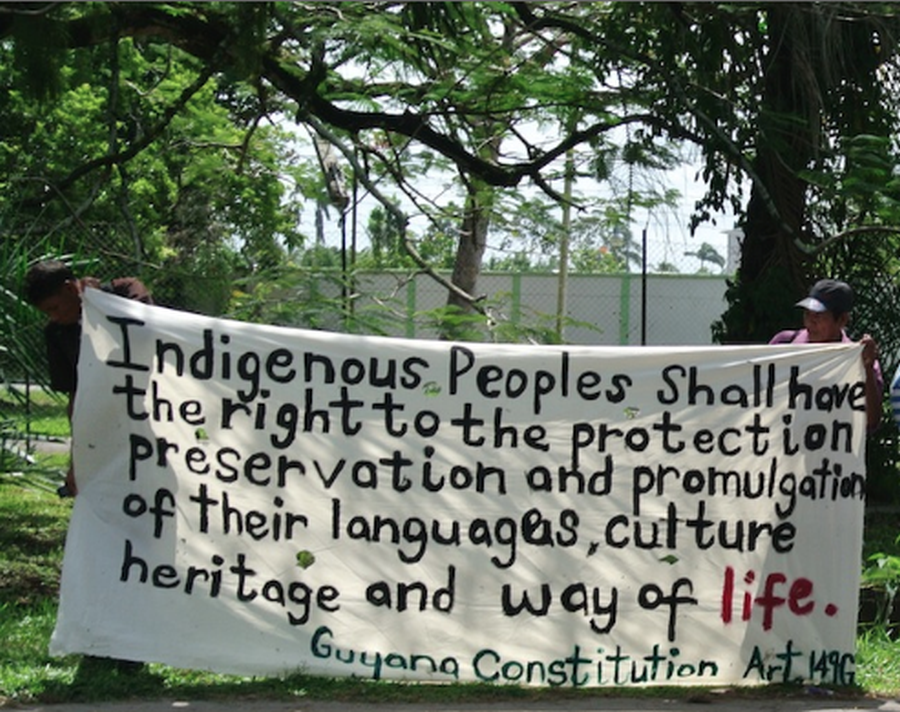 Amerindian Heritage Month is an annual observance in Guyana during September to honour its Indigenous Peoples. There is focus on languages, food, dance, lifestyles, and culture of the various Amerindian groups. But the point is that this is a celebration for all Guyanese, not just its Indigenous Peoples, as “they” are part of “us.”

To start, we call to mind “Doctrines of Dispossession” – the racism against Indigenous Peoples and describing their historical situation in the New World.

As white European colonizers arrived in the New World, they settled with drastic results. The Indigenous Peoples were pushed aside and marginalized by the dominant descendants of Europeans. Some peoples disappeared, or nearly so. Modern estimates place the 15th century, or pre-Columbus, population of North America at 10 to 12 million. By the 1890s, it was reduced to approximately 300,000.

While it is fair to say that Amerindians continued to be maltreated by “dominant descendants of Europeans” in most of Latin America, the United States, and Canada, Guyana’s situation in recent decades has been different.

In Guyana, the state and cultural power is not held by one group of people who are descendants of imperial oppressors. For all intents and purposes, the descendants of the former colonizers – the British, French and Dutch – have long gone. The three major racial groups who were left to make up the population of Guyana – the Africans, the East Indians, and the Amerindians – were each wronged by the colonial powers, but wronged in distinct ways.

The Amerindian Guyanese (presently 9%) were decimated by disease and persecution brought by the Europeans from the 15th century onwards. At first, Amerindians were enslaved and even transported from Guyana to other Caribbean Islands. As forced labour on plantations, they proved ineffective being prone to disease and early death. To a far greater degree, Amerindian peoples in the Caribbean were displaced from their settlements with the coming of the Europeans, and populations moved around the region fleeing persecution and disease.

The black Guyanese (30.2%) were brought to Guyana from Africa by the Europeans to work on their tropical farms because they did not find the Amerindian populations manageable for this kind of exploitation. Thousands of miles away from their homelands, the originally African people suffered unimaginable hardships as slaves, and this did not end with the abolition of the slave trade (1807) or the abolition of slavery in the 1830s, as discrimination by white overlords remained rampant in an empire where non-whites were considered “subhuman.” After the abolition of slavery, black Guyanese largely no longer wanted to work the cane fields that were their bondage.

Labour was still needed by the colonialists to work the fields, and other sources of labour were found in the British Empire. Indentured labourers from Madeira, China, and most significantly India, were brought to work in conditions that were also a form of human bondage. Conditions were also horrendous for these peoples, and the colonial British established a hierarchy of peoples. Today, it is the descendants of the Indian labourers that make up the largest part of the Guyanese population (43.5%).

The vast majority of the present day Guyanese population is made up of these three wronged peoples. Injustices between the groups are also historically present, such as the help the Amerindians gave the Europeans in catching runaway African slaves, the underdevelopment of Amerindians in the 20th century even when governments run by largely Black and East Indian government were in power, the suppression of East Indian culture by the Burnham regime, and the racial discrimination between groups still evident in society as evidenced by the common use of racist expressions such as “nigger,” “coolie,” and “buck.”

All peoples in Guyana have felt the injustice of colonialism as a terrible suffering in each of their experiences. History should be remembered, but it should not define anyone. It is the actions that we do today that say who we are. Afro-Guyanese, East Indians, and Amerindians have all been victims, but to define oneself by victimhood is to identify the cause of one’s present problems as the consequences of other people’s actions. The child from an abusive home can blame her parents for her present misery or she can come to terms with what has happened and in so doing become a free and responsible adult. In the same way, while the population of Guyana needs to remember and own its history, it also needs to recognize that progress and development depend on social cohesion and the overcoming of racial suspicion and mistrust.

While “One People, One Nation, One Destiny” maybe meaningless political rhetoric for many, it does however offer a vision of development that is still valuable. The Guyanese are not one homogenous group of cultures; “One People” does not mean one “race.” Instead it means one people sharing a dialogue about a dream for how they want to live their lives and how they want to be. Brought to the table are all the cultural baggage, and, more importantly, the cultural gifts that express universal truths about what it means to be human, though expressed in particular circumstances.

Anyone working for the development of Guyana cannot define their work in terms of Amerindian versus Coastlander, or indeed woman against man, Muslim against Hindu against Christian, gay against straight, or poor against rich. That is the way to further separation, discord, disunity and, ultimately, underdevelopment.

Forbes Burnham and Cheddi Jagan, former Presidents, for their many faults, did attempt to define who a Guyanese is. The problem, particularly with Burnham, was that the definition was a dictate from above rather than a conversation amongst everyone in society.

A definition of “Guyaneseness” was often narrowed rather than broadened to fit the real diversity and wealth of the country. For any kind of meaningful identity to be realized, it is always a question of opening up ourselves rather than closing ourselves off.

To sing “I Am a Guyanese” should lead us to greater understanding of the breadth of experience that brought all these people to this country and fed each one with the strength that is needed to build Guyana into the kind of home where Guyanese will want to live – a land that is rich, clean, comfortable in its landscape, and capable of setting its people in happy and prosperous lives.

Paul Martin, SJ is the Jesuit Superior in Guyana, where the Society of Jesus began their mission in 1857. To read more about their work, please visit their website (http://www.guyanajesuits.org/).

One thought on “Indigenous Peoples in 21st century Guyana: One People, One Nation, One Destiny”