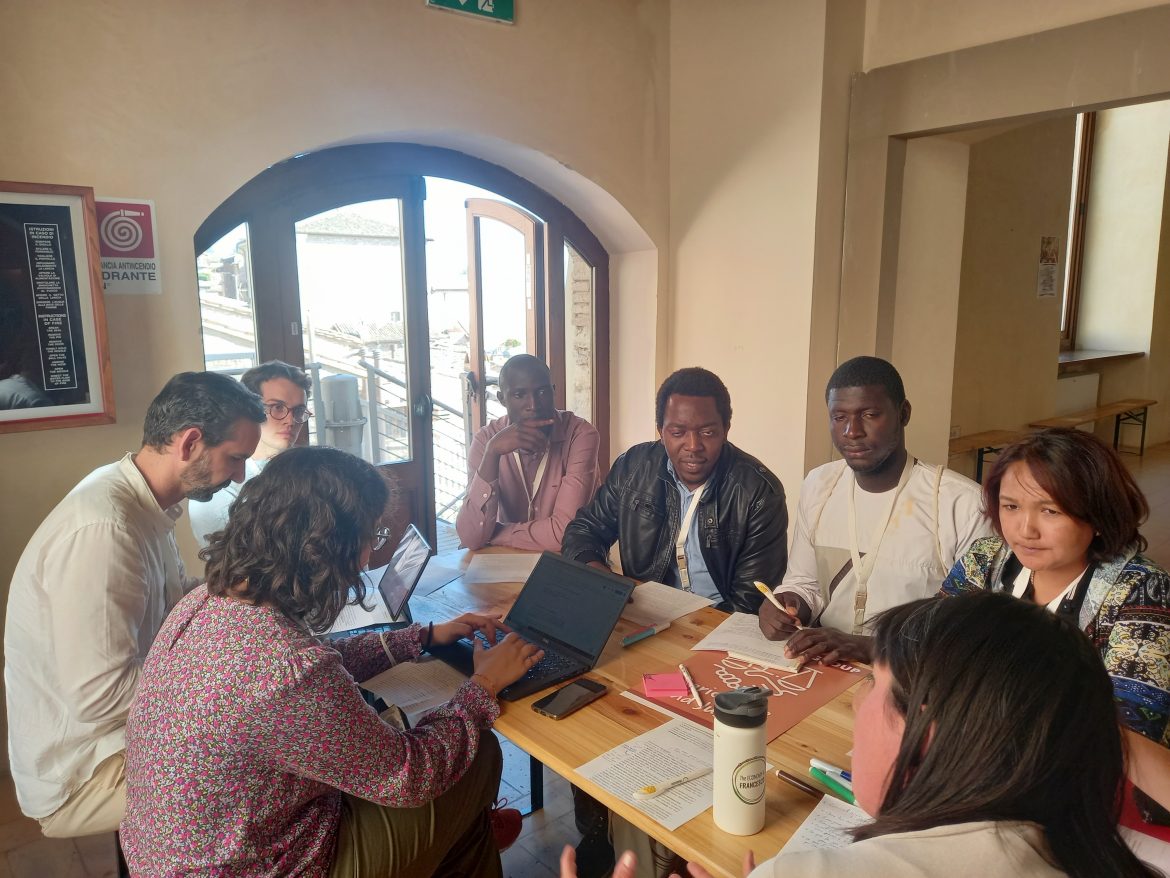 In the Economy of Francesco, the 12 Villages that represent the different working groups on key social and economic topics are also ways of bringing together young people from various territories, cultures, and backgrounds, into spaces of dialogue to exchange questions and perspectives, reflections, and proposals for grounded action.

The second day of the Economy of Francesco global event started with a walking tour around the historic town of Assisi where the young changemakers made their way towards their villages. The village I joined – Agriculture and Justice – was housed at the Palazzo del Monte Frumentario, a hospital during the 1200s and eventually used to store wheat and other agricultural products during harvest season.

The Agriculture and Justice village brought together young people from the different regions of Africa, Europe, Latin America, North America, and Asia, all seeking to find ways to address the agricultural injustices perpetuated by an oppressive economic system. To facilitate the dialogue, the village was divided into breakout groups. It was enriching to listen to the stories and realities of farmers and fisherfolk in the different territories. For my part, I shared about the plight of small farmers, particularly corn farmers in the uplands of Bukidnon in northern Mindanao, Philippines. Due to unjust financing and trading systems, these small farmers use agricultural inputs sold at high monthly interests that trap them in a cycle of debt where they receive a mere 5% of the income generated from the harvest. The proliferation of high-yielding corn varieties in the uplands has led to land degradation and water contamination, exacerbating the vulnerability of farmers in the marginal uplands.

It is a common reality shared as well by many of the Agriculture and Justice villagers. A villager from Michigan, a state in the Great Lakes region in the US, shared that despite Michigan’s leading role in the production of agricultural crops in North America due to its crop diversity, financial and system imbalances discourage the youth from choosing an agriculture-related profession. As a result, the average age of farmers in Michigan is 56 years old. Another villager from India emphasized how agriculture gives life and livelihood to the people, yet agricultural laws that favor corporations oppressed farmers to the point of suicide. When the Parliament of India passing the Farm Bills in September 2020, farmers staged a year-long protest amid the COVID-19 pandemic, and which spurred policy change. And in Rwanda, a villager shared that due to the food crisis in Africa, agriculture is often associated with poverty and there is increased gender-based violence. As a result, young people prefer to find other livelihood opportunities.

Injustices that continue to threaten the food system at the local and global level were raised in this dialogue, and a sense of solidarity was shared. For our small group, agriculture and justice means that youth find a future in the land, small farmers and fisherfolk do not feel oppressed by an unjust system and can adapt to the impacts of the climate crisis, the welfare of the land, water, and biodiversity is cared for, and that the rights of women and girls are upheld.

It was an enriching and empowering experience to listen and learn from the stories and to contribute insights to the village’s process document. It is hoped that these contribute to meaningful actions towards an economically just food system that cares for the well-being of people and the Common Home.

Criselle Mejillano is the Ecojesuit Networking Coordinator and joined The Global Event 2022 of The Economy of Francesco. Criselle is a young staff of the Environmental Science for Social Change, a Jesuit research and training organization in the Philippines. She can be reached through her email ecojes.networking@gmail.com.