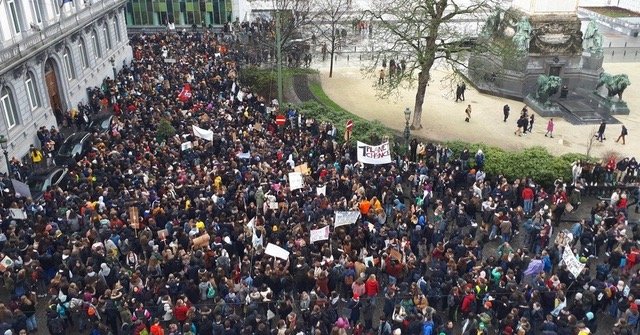 A protest that started with a 15-year-old Swedish girl who refused to go to school unless politicians start “prioritizing the climate question” has snowballed into a global movement fueled by children who want their adults to take urgent action on the changing climate.

Thousands of students in Belgium, The Netherlands, Germany, Switzerland, Canada, and Australia have walked out of their classes over the past months to call for a more serious political action on climate change, following solo protests held by ninth grade student Greta Thunberg outside the Swedish Parliament in August last year.

Up to 70,000 students have taken to the streets every week in 270 towns and cities all over the world to put pressure on their governments to take urgent steps to improve the climate situation.

Thunberg attracted international media attention after she refused to go to school and instead sat every day in front of the Swedish Parliament with a placard that says “School strike for climate” to draw attention to the climate crisis.

She delivered a forthright speech expressing her frustration on the political inaction on climate change during the UN COP 24 climate talks in Katowice, Poland in December 2018.  “You say you love your children above all else, and yet you are stealing their future in front of their very eyes…We cannot solve a crisis without treating it as a crisis,” she said.

Thunberg inspired a global school strike day on 15 March in cities and towns in Australia under the banner School Strikes 4 Climate, organized by school children striking from school for a safe climate future.

The movement recently reached the UK where thousands of students are expected to take part in a coordinated day of action on 15 February through the Youth Strike 4 Climate, a mass strike supported by the National Association of Head Teachers.

Thunberg continues to hold school strike every Friday outside the Swedish Parliament, now joined by various supporters, in what she calls Fridays for Future and will not stop “until Sweden is in line with the Paris Agreement.”

“Some people say that we should be in school instead, but why should we be studying for a future that soon will be no more?” Thunberg said on a video she released on her Facebook Page inviting other students to join the strike.

“What is the point of learning facts within the school system when the most important facts given by the finest science of that same school system clearly means nothing to our politicians and our society?” she added.

Addressing global leaders in Davos, Switzerland during the World Economic Forum in January 2019, she minced no words and expressed her frustration anew. “I often hear adults say: ‘We need to give the next generation hope’,” she concluded. “But I don’t want your hope. I want you to panic. I want you to feel the fear I do. Every day. And want you to act. I want you to behave like our house is on fire. Because it is.”