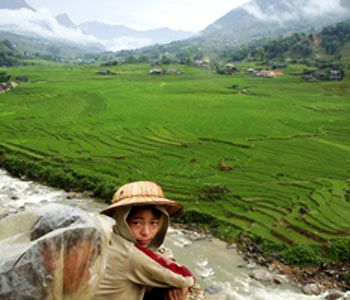 Quite a number of big words and concepts, such as DIGNITY, RESLIENCE, EQUITY, and so on, have been heard in the RIO+20 Summit.  All of them clearly represent a reasonable standpoint, and we find them important and interesting.  In the Summit, we have even heard those words and concepts in the context of the slogan “ANOTHER WORLD IS POSSIBLE.”

Today we seem to be able to fit in just about any position within this perspective, and it feels that the original root of this proposal has been trivialized, or it lacks its initiating scope.  We are deeply concerned by the fact that most of this concepts and ideals were subjugated by the umbrella perspective that insists to swallow everything else here in the Summit, namely the Green Economy (GE).

We have witnessed in Rio+20 and in the working discussions beforehand how the concept of GE brings along with it the concept of Sustainable Development.  This was a concept that held good ideals and intentions, but one that was also swallowed by other interests, and which seems to be sentenced to death in this very Summit after 20 years of failing to be fulfilled.  With these ideas, we don’t wish to reject all of the very important inputs societies brought in when positioning and strengthening these concepts.

The main problem we see, which turns into an unethical social-structural model of our world system today, is that there are interests with incomparable dimensions, and which represent the highest scale of the most important corporate groups, ones that have no nationality.  They don’t need such identity due to the fact they’re immersed in a global scheme that is created and reproduced along the paths they themselves have set.  These corporate groups and their interests have such power that we can smell their positions all around this Summit through some NGO discourses and member States, but mostly through the CENTER-PERIPHERY logic which structures the world today, and that has a strong influence on the dialogues among Nations and organizations in this very Summit.

It’s already been said by Michael Porter on his book “On Competition” that there are winner nations, and loser ones.  This was also stated by the authors that supported the Center-Periphery theory (Friedman, Prebisch, and others) focusing on the economic exchange and trade in which the world system is based upon today.  The “Center-Winner” is the one that establishes the dominant discourse, sets up the agenda for discussion, and generates models to be exported to the “peripheral-loser” ones who are seen as incapable of setting up their own objectives and horizons, or if they do it outside the frame set by the firsts, they are seen as a threat or become excluded.

Here at the Rio+20 Summit, we can sense and confirm the CENTER-PERIPHERY perspective at a conceptual level, where the intensive promotion of the GREEN ECONOMY category is setting the rhythm of discussions.  GE is establishing the market mechanisms and rationale as the organizing axis of society.  The GE concept, as perceived by some experts that spoke at this Summit, reaffirms the central position of agro-businesses and big corporations as the foundation to overcome poverty, and relies on itself to solve everything else as a consequence of its correct implementation.

Solid and well informed voices present at this Summit speak from the experience of RESILIENCE that’s rooted in agro-ecological visions, stating diversity as the center view to acknowledge the complexity of our world’s reality.  Most of all, they confirm that responses, if they are to come from true RESILIENCE, should start from grassroots experiences – especially from peasants, indigenous communities, and other social groups who have experienced a historical relationship of reciprocity with the environment, and those who still provide the world with the greatest proportion of agricultural products that would allow us to achieve food sovereignty.

But there are always doubts and questions around these issues related to the CENTER-PERIPHERY approach.  The main problem in this context is that most major decisions were already made by the representatives of the CENTER position.  This presence gains force in those statements that affirm there’s no need for a structural change in our societies at a world level.  They trust that it will be sufficient to green up the already existing development model which has led our way for the past decades, and so we should focus mostly on mitigating the impacts which some wrongfully present as “externalities.”  This category is wrong because these so-called “externalities” are not random or external and calling them that way takes away every responsibility for the consequences of decisions made out of a market and consumption-centered standpoint, intending to make the highest profit possible regardless of the impact on communities and societies.

We find those voices all around this Rio+20 Summit trying to convince us that we are all being heard, and that we assist in a deeply democratic event.  But while we participate here, we can see how decisions and discussions took place months ago, and that the idea that economic growth, dressed in green, is the only way out of this global crisis.

Experiencing the CENTER-PERIPHERY reality in this Summit is truly worrying, but it’s even more alarming to imagine and confirm how most of the grassroots social movements, organizations, and minority groups who are taking part in the CÚPULA DE LOS PUEBLOS (civil society’s alternative event) don’t seem to have any possible way, formal or informal, to connect their demands and objectives into this “democratic” event of the globalized world.

If “another world is possible,” those who we label as the most vulnerable, and who will certainly be the most affected by the outcome of the GREEN ECONOMY model, then, they should be the ones showing us the way and teaching us lessons on how to understand and live out the concept of genuine RESILIENCE.

Mauricio Lopez is with the World Christian Life Community and he may be reached through his email: mauricio(at)cvx-clc.net