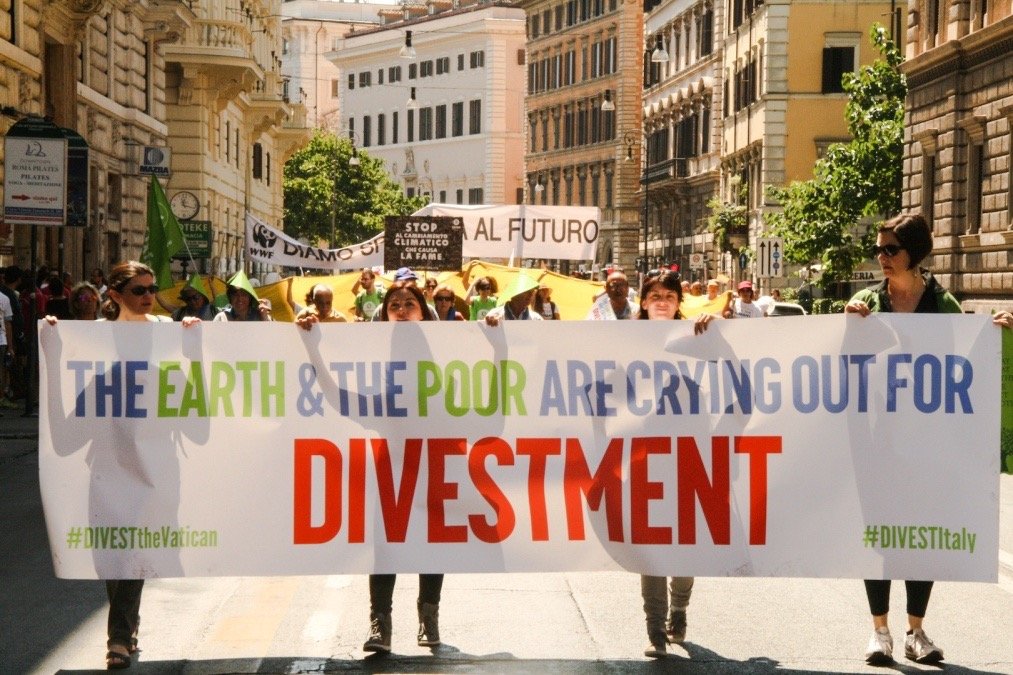 Ecojesuit shares this recent press release on the largest joint action of Catholic groups so far to divest from coal, oil, and gas investments, of which the Italian Jesuits was part.  Gianfranco Matarazzo, SJ, Provincial Father of the Italian Jesuits said: “I express the adhesion of the Italian province of the Society of Jesus to the divestment campaign.  With this adhesion, I announce the intention to start a more detailed process about the different ways of removing our investments from fossil, progressively within the next 5 years.”

In October 2016, the Jesuits in English Canada joined other Catholic institutions around the world and announced their divestment from fossil fuel extraction, immediately stopping all future investments in fossil fuels and working to divest such holdings from the current portfolio within five years. It was the largest faith-based divestment announcement then. “Climate change is already affecting poor and marginalized communities globally, through drought, rising sea levels, famine and extreme weather and we are called to take a stand,” said Father Peter Bisson, SJ, Provincial (Superior) of the Jesuits in English Canada Province.

Nine Catholic organizations from around the world announced on 10 May 2017 their decision to divest their portfolios from coal, oil and gas companies in the largest joint Catholic fossil fuel divestment to date.

The groups – including religious orders and dioceses from the UK, USA and Italy – made the announcement ahead of international negotiations this month on implementing measures in the Paris Agreement on climate change.  Fossil fuels such as coal, oil, and gas are the main cause of the greenhouse gas emissions which are changing the climate and pushing people in the world’s poorest communities deeper into poverty.  Globally, 2016 was the hottest year since records began, a title held in 2015 and 2014.

The announcement is also significant in the number of different Catholic orders – including Jesuits and Franciscans – uniting once again behind this issue, which is gaining growing support at all levels of the Catholic Church.  The news comes off the back of a January conference – attended by Cardinal Turkson, Prefect of the Dicastery of Integrated Human Development and one of the Pope’s closest advisors on environmental issues, as well as former UN climate chief Christiana Figueres – on the subject of investing according to the principles laid out in Laudato Si’.

The Italian Jesuits are now the second national Jesuit group to have divested and thus heeded the call to care for creation of their fellow Jesuit Pope Francis.  The Siloe Monastic Community is the first Catholic monastic community in the world to divest.  The Diocese of Pescara becomes the second diocese to have divested to date, while the Diocese of Bologna together with the Italian Bishops Conference and the Catholic NGO coalition FOCSIV will promote divestment issues during a conference on 8 June in the presence of the Italian environment minister Gian Luca Galletti two days before he heads to the G7 environment ministers meeting in Rome.

The announcement comes just under a month before the second anniversary of Laudato Si’, which called on Catholics and non-Catholics alike to care for our common home. With some of the world’s most powerful leaders meeting for the G7 Summit in Sicily from 26 to 27 May to discuss the biggest threats to global stability, and with almost 200 countries meeting in Bonn from 8 to 18 May for the UNFCCC negotiations to add the important technical details to the framework of the Paris Agreement, the divestment also sends a powerful signal of the momentum behind and popular support for ambitious action on climate change.

This latest announcement also comes in the middle of the week-long Global Divestment Mobilization organized by climate change NGO 350.org where thousands worldwide are taking action to push cities, universities, churches, pension funds, museums and other institutions to demonstrate climate leadership by breaking their financial ties to fossil fuel companies.

This press release is from the Global Climate Catholic Movement (GCCM), a coalition of over 100 Catholic organizations working to respond to the moral imperative of the climate change crisis.  Further information can be found at the GCCM Catholic Divest-Invest Hub.