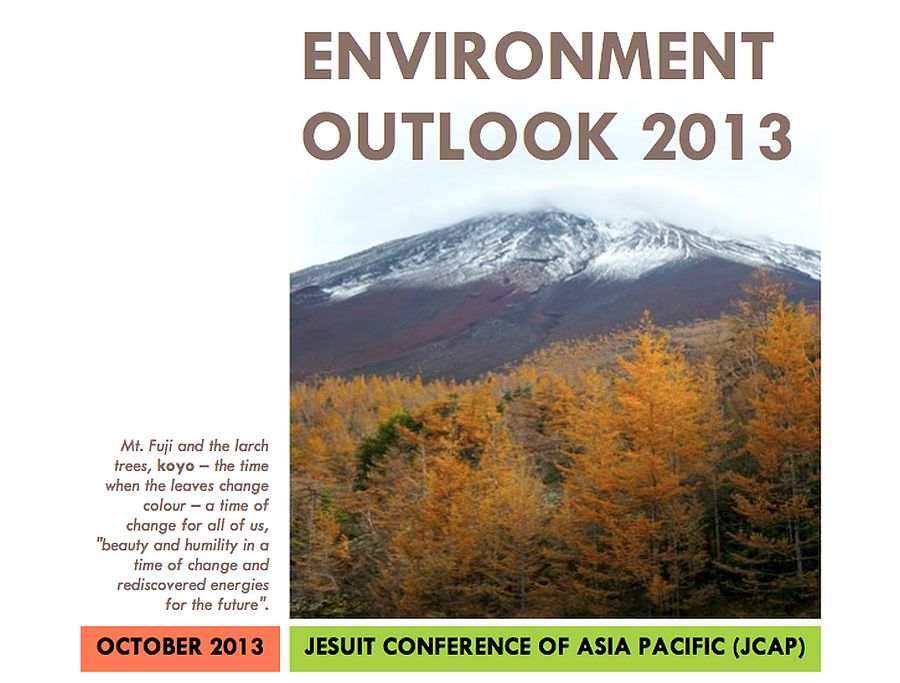 Environment Outlook 2013 is a report of the Jesuit Conference of Asia Pacific (JCAP) that presents a brief overview of key environmental concerns, advocacies, events, policies, and discoveries in Asia Pacific. It is based on the different levels of responses and initiatives of Jesuits and collaborators in reconciling with creation, as seen in visits and levels of engagement with Jesuit provinces, institutes, and schools in Asia Pacific and beyond.

Pedro Walpole, SJ, JCAP Coordinator for Reconciliation with Creation, encourages the report’s critique as to its coverage of respective areas. At the same time, he requests that the levels of initiatives be continuously documented and reported, highlighting areas in different provinces in which there is a particular call to respond.

In the publication’s foreword, it was noted that JCAP President Mark Raper, SJ set the tone for Jesuit people in the region to take up the challenge to seriously include ecology and migration, JCAP’s priority themes for engagement, as part of their institutional themes and programs of action. Many responded positively with Jesuit provinces and institutions struggling to develop and implement their ecological agenda. Some translated Healing a Broken World to better inform Jesuits, scholastics, faculty, and students in caring for the environment. Others are establishing waste management and recycling systems or reviewing their curriculum to integrate ecology in the various subjects such as geology, geography, ethics, business, and economics.

While there are many ecological initiatives happening, the challenge remains in bringing together all these local experiences and learnings so that others may learn. The challenge too is there in collaboration, a challenge that Father General Adolfo Nicolas encourages all to pursue as we seek reconciliation with creation.

For a copy of the report, please go to JCAP.