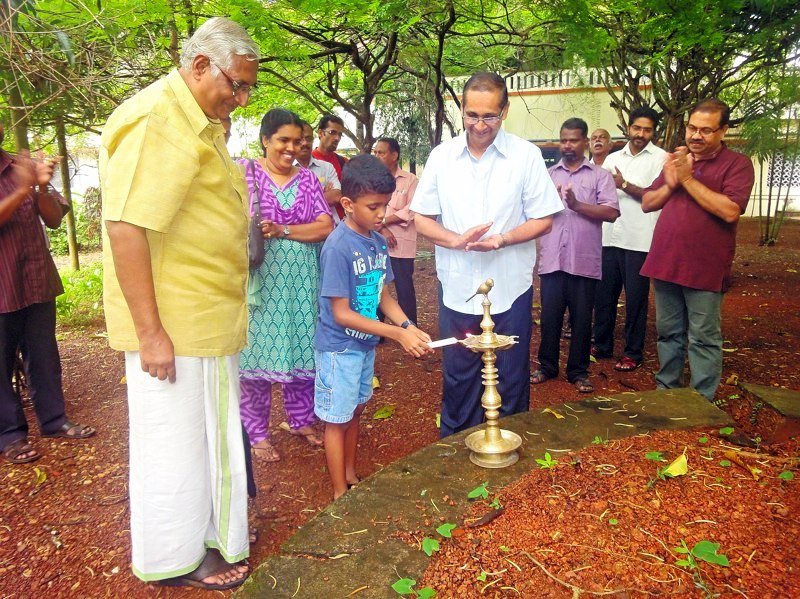 Saddened by the continuing degradation of Kerala, referred to by tourist posters as “God’s own country,” and urged by the church and the Society of Jesus to plunge into a ministry to protect and nurture God’s creation, Father James Morais, SJ from Kerala Province, Father Robert Athickal, SJ from Patna Province, and Father Rappai Poothokaren, SJ from Gujarat Province initiated and organized four consultation on ecology and ecospirituality sessions last June 2013.

Kerala is the strip of land wedged between the Western Ghats in India and the Arabian Sea, flourished with the abundance of nature’s bounty. Almost six months of rain and closeness to the equator makes Kerala a tropical paradise of biodiversity, appearing in world tourist literature as one of the 50 “must see” places in the world!

Most people in this southwest state lived on agriculture and post-independence, a lot of cultivation for food was replaced by cash crops and agriculture in Kerala is now mostly commercial. Monoculture cropping, with liberal use of chemical fertilizers and pesticides, drastically destroyed the biodiversity. Land, air, and water pollution levels are causing health hazards. The economic development of Kerala, heavily driven by remittances from large-scale migration abroad in the last decades, is engendering a style of life and consumption patterns with drastic consequences on the environmental health of the state.

What was picked up in the consultations with activists, academicians, and concerned and knowledgeable people in Kerala is that Kerala is fast heading towards an ecological disaster, with vital areas of food and health getting the direct hits. These are the highlights of the consultations:

Plenty of money, but no good food: While the monocultures of rubber, coconut, cocoa, vanilla, cashew, and pineapples brought financial security to many families in Kerala, the process ended up in total dependence on neighboring states for their daily rice, vegetables, and meat. Large-scale global migration of Kerala youth raised wages to extremely high rates. Farmers in Kerala thus found labor to cultivate daily food items like rice and vegetables extremely difficult and expensive to obtain, nearly diminishing traditional rice cultivation in the state. As a result, these monocultures spread further into farms.

The late botanist Dr KM Mathew, SJ used to say that monocultures like rubber turned our state into a large ‘ecological cemetery.’ Gone is the exuberant diversity of life in Kerala – plant and animal!

Participants in our consultations confirmed that our staple food, rice, as well as vegetables and meat, reach Kerala every day from industrial agriculture prevalent in neighboring states. Extensive and intensive use of chemical fertilizers, hormones, and poisonous pesticides form an integral part of the cultivation. Aware of the consequences of such cultivation on health, most farmers grow organic food for their own family consumption. Poisons like Endosulfan, banned in Kerala by the Supreme Court after a protracted struggle, are extensively used in the rest of the country. It seems that profits from poisoned food are acceptable in commercial and industrial agriculture, as long as others are the victims! Has Christianity and other religions challenged the morality of such immoral and ‘criminal’ behavior?

Problem of waste: All the groups were unanimous about the irresponsible and calamitous way people and institutions dispose of their waste. Many felt that waste disposal is one of the biggest problems of Kerala on the ecological front. The municipal corporations and panchayats (village councils) have inadequate arrangements for waste disposal and people throw waste anywhere. The rivers of the state take up the brunt of the problem and are littered with waste, plastic bags, and bottles all through the year. The problem grows daily.

Health is in serious threat: Health is the direct victim of these environmental changes in Kerala. Economic Times, a daily business newspaper in India, reported last December 2012 that cancer patients in Kerala registered an alarming increase of 200% increase in the last three decades. There are no definite figures on the increase in cardiac problems. One of the sources rates it at over 800%. Stomach ailments like ulcer, diarrhea and intestinal cancer are common. Polluted air causes many respiratory problems. It is commonly perceived that children put on unnatural weight.

The crisis of rice cultivation: The farmers in the consultations opened up their palms in helplessness and shared that the standard of living is very high with costs for education, transportation, electricity, and food steadily rising. All the farmer representatives said that they could not reduce the cultivation of monocultures, especially rubber. The shortage of workers raised the daily wages of an unskilled laborer to over Rs 500-600, where the minimum daily wage rate in Kerala is around Rs 200, and no farmer can afford to hire them to cultivate rice.

Role of the Church, especially the Jesuits: Many thought that the Church as a body should take up a prophetic stand at this hour of crisis. The ecclesiastical leadership can persuade people to opt for a life of greater simplicity and mutual assistance and cooperation. Instead of building up larger, opulent churches and institutions, the followers of Jesus could persuade the community to lead simpler ways of living a happier life. While the technocratic society looked at frugality as poverty, the Church, especially the religious communities, vowed to live simple and poor lives and a cherished, frugal but contented living.

If families can cultivate most of their daily needs of rice and vegetables in their own farms, they could live healthier lives. Even terraces could be used to grow organic food for the shrinking family sizes. They may have to cut down on their indulgence on fish and meat. While the labor force is expensive, an extra bit of mutual assistance during transplanting and harvesting can make the cultivation of the staple rice possible. Looking back to 50 years of Kerala history, such give-and-take practices were common. Parish priests and religious can give leadership to people in this crisis of survival.

Generally people expressed very high expectations from the Jesuits. “Hope you will initiate some large scale campaigns to put the state on right footing,” wrote one of the participants after the consultations. One of the Jesuit initiatives in Kerala, the Eco-Reserve Attapadi, though welcomed well, was felt by the participants to be way out in Northern Kerala, in a small hamlet away from the mainstream. People wanted the Kerala Jesuits to think out of the box, with their characteristic tradition of venturing into the unknown as frontier men and pioneers.

Changes are taking place: Generally we heard healthy comments on the expanding ecological awareness in the state. Many were discussing the situation, especially the issue of poison on the plate. Media now highlights more ecological issues, and getting positive responses. The time is ripe for action!

Organic Cultivation: Quite a few individuals shared about their small organic agriculture in and around their homes. They often grow enough for their small families, and thus combat the problem of pesticides and chemicals. When we stayed at the Jesuit Novitiate in Alwaye, they served us a tasty lunch. The Novice Master, Fr. Jose Jacob, told us, “Everything you eat is from our campus!” Organic farming was catching up and he later showed us a vibrant garden of fresh vegetables. The Novitiate also has a fairly large rain harvesting system on its roof.

A group of farmers told us that they were organizing the cultivation of rice in a cooperative way, helping one another along the way. A few housewives told us that they avoid purchasing ‘poisoned’ fruits from the market. Instead they developed a special appetite for totally organic fruits like jackfruits, jamun, and guavas that grow within their own compounds.

One farmer who solely cultivated rubber told us that he was enlightened during the workshop, and was determined to re-start his rice cultivation.

Ecospirituality: We felt that only a change in attitude towards God’s Creation would lead to action and offered interactive sessions on ecospirituality leading to heightened awareness and action. Across Kerala, we had almost a dozen interesting ecospirituality sessions for seminarians, a large group from the Catholic Religious of India and from women’s associations, teachers, students of management, technology and schools, and senior citizens.

Towards the end, it was acknowledged that the Kerala Jesuits were taking up the highly neglected, but very important and urgent issue of ecology at the right time. People expected that Jesuits as pioneers would think out of the box, and contribute to solutions and suggestions for sustained ecological campaigns.

For related stories, please go to Matters India  and a previous story on Ecojesuit.