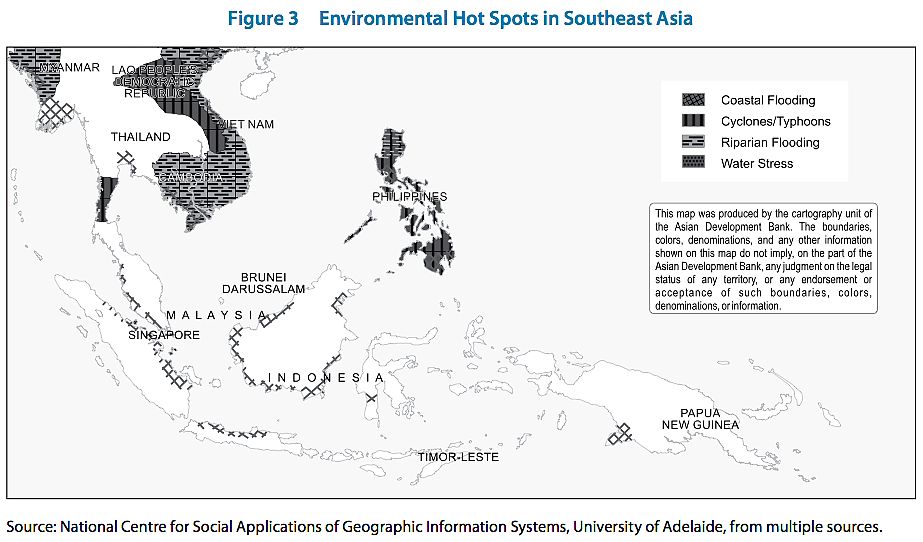 Ecojesuit shares this working paper by the Jesuit Refugee Service (JRS) developed in early 2011 as it increasingly responds to forced migration and displacement of people in the context of climate change.  This working paper was written collectively by many JRS workers who have experience in this topic and is not intended to be an official JRS position.  JRS is happy to share this working paper and welcomes ideas and action.

Climate change is but one of the many factors that impact millions of people’s wellbeing today.  In 2009, it was estimated that between 50 and 200 million people will be forced to move on a temporary or permanent basis by the middle of this century.

A natural disaster is the effect of a natural hazard (e.g. flood, tornado, hurricane, volcanic eruption, earthquake or landslide) that affects the environment and leads to material damage, financial, environmental and human losses as well as displacement.  The resulting loss depends on the capacity of the population to support themselves or resist the disaster, their resilience, and the capacity of state authorities to mount a timely response to prevent or reduce the impact of the disaster.  Disasters occur when hazards meet vulnerability.  A natural hazard will not result in a natural disaster in areas without vulnerability, e.g. earthquakes in uninhabited areas or in communities with earthquake-resistant buildings.

Natural disasters can destroy the livelihoods and infrastructure of a community including housing, food, arable land, and other means of production.  The death of key members of a community can destroy its social fabric and limit functionality of the community, even threatening their capacity for self-determination leading to a loss of autonomy. Human and material losses combined with the experience of a life-threatening disaster leave members of communities in shock, with some individuals experiencing trauma long after the disaster.  Natural disasters often lead to short or long term displacement and are hard to distinguish from man-made disasters in some cases, for example when floods and landslides caused by human activities such as logging.

Displacement resulting from natural disasters must be understood in the wider context of environmentally forced migration, including pressures arising from climate change or from the implementation of large scale development projects, where the environmental impact and the effect on the traditions of local communities and their rights to the land have not been taken into account.

These pressures are expected to lead to adaptation strategies that may include migration to urban or rural areas.  It is anticipated that natural disasters and disaster-induced displacement may increase as a result of climate change, and that such migration will constitute one of the biggest challenges over the years and decades to come.

Similar challenges are arising in situations where disaster-displaced communities cannot return to their land due to policy decisions that identify land as too unsafe to return to because of the continuing threat of landslide, flooding, and other hazards.  In such situations, displacement caused by disasters may lead to conflicts within the displaced communities or with the surrounding or host communities and might require facilitation, negotiation, and reconciliation assistance to bring the displaced and host communities to a satisfactory accommodation.

While in the immediate aftermath of a disaster, those affected primarily need fundamental, life-saving humanitarian assistance, experience teaches us that they are also at serious risk of human rights violations, ongoing physical and psychological damage, and the loss of human dignity.  Moreover, discrimination and violations of economic, social and cultural rights can become more entrenched the longer displacement lasts.  These violations are, in most cases, not consciously planned and instigated but result from a lack of appropriate policies, and the implementation of inadequate and non-coordinated humanitarian interventions.  They could be easily avoided if the relevant human rights guarantees were taken into account from the outset.

For this reason, protection must be an intrinsic part of the emergency response from the first moments of the relief effort.  It follows that policies and procedures must be developed and put in place by responsible authorities, including governments, UN emergency response agencies, NGOs, and other stakeholders, ensuring the integration of protection into all response activities.

In responding to the needs of those affected by natural disasters, the local context (culture, traditions, and practices) should be recognised and addressed during planning, implementation and evaluation of the response.  Where more than one cultural or ethnic community is affected, it may be necessary to ensure that an equal needs-based standard of assistance is applied, and to focus coordination efforts on avoiding discrepancies in aid delivery.  In those situations where there are pre-existing tensions between different social groups, transparency and community involvement is especially needed to avoid conflicts.

Participative and inclusive methods carried out with cultural sensitivity should be practised in programmes addressing emergency response, rehabilitation and mitigation.  Community, local NGOs, and local government participation should be ensured in planning, implementation and evaluation of the project.

In cases of massive destruction such as, for example, the tsunami in Aceh, there is a need for monitoring of actors addressing the needs which arise.  The voluntary participation of local communities and organisations should be ensured as a way to strengthen their resilence and solidarity.  In the case of the Aceh tsunami response, a second tsunami of International NGOs and UN agencies operating according to their “standard procedures” was not transparent and was sometimes insensitive to the local context, leading to damage in the social fabric of the community.

Responding to natural disasters and the resulting displacement is generally not a priority focus of JRS offices, which have relatively little experience in this area.  As a general rule, JRS does respond to natural disasters when a JRS project already exists or is close to the affected area and when a JRS accompanied-community or camp is affected by a disaster.  JRS does not address large-scale needs but focuses on accompanying and serving displaced persons and communities with severe unaddressed or complex needs that no one else is addressing.

Important factors in the decision to respond to disasters are the capacities of the local JRS staff and the availability of resources to take on the work while sustaining the commitment to ongoing priorities.

JRS reacts to emergencies by providing services in its core competencies:  education, medical help, basic food and non-food assistance, reconciliation and advocacy, always considering its role in relation to that of experienced NGOs and authorities.  Coordination with these parties and the eventual handover of information and programmes should be planned for from an early stage to ensure a smooth exit strategy.  Difficult cases, such as communities that are highly vulnerable and those with specific needs (e.g. with previously experienced conflict displacement and are vulnerable to disaster displacement) should receive special attention as they might gain greater benefit from the JRS style of accompaniment.  A JRS response will always be characterised by an emphasis on the quality of the response rather than solely by quantitative criteria.

The JRS way of working is through small teams with little logistical baggage, focusing on providing human resources rather than on large-scale material inputs.  The JRS focus on advocacy, as well as the commitment to accompaniment with its implicit undertaking to do no harm to the dignity of the human person, is a core characteristic that should be upheld in both the initial emergency response and during the rehabilitation phase.