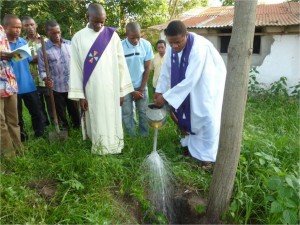 Jesuit scholastics of the Saint Peter Canisius community (Central Africa Province) at Kimwenza in Kinshasa, Democratic Republic of Congo organize activities every three months to raise more awareness among Jesuits and friends on the need to be in harmony with Mother Earth and to be reconciled with Creation. This awareness and commitment is the result of the work of the Group of Reflection and Action on Ecology.

During National Tree Day last 5 December 2013, they collected papers all over the compound for recycling with many members of the community. They celebrated an Ecological Mass and shared the Eucharist in the outdoors, under the trees, with the assembly sitting on the grass with Fr Benoît Mbuyi, SJ with the Deacon Raphael Bazebizonza, SJ presiding. To begin the Eucharist, Fr Benoît blessed and planted a tree at the very place of the celebration. The two leaders of the Group, André Samalambo and Albert Andemir’Irenge led this ceremony and explained its deep meaning.

With the wind, with birds singing, with the shadow of the trees, people really felt in communion with Nature. And when Fr Benoît held the Host saying, “this is my Body…” it was as though the whole creation was taken into this host and shown as the Body of Christ. 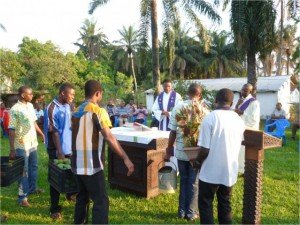 Fr Benoît warned the congregation against the temptation of reducing ecology to an ideology. It is rather a way of life. In fact, it is our whole life: to be connected to the whole Creation, to recognize that we are part of Mother Nature. It is not enough to be part of a “green movement,” but to be really committed with Nature in their life.

Ecology is not about knowledge or ideology, but a way of life and Jesuit scholastics of Kimwenza are learning and working, reflecting and acting.

One thought on “Jesuit scholastics reflect and act on ecology: National Tree Day at Kimwenza, Democratic Republic of Congo”