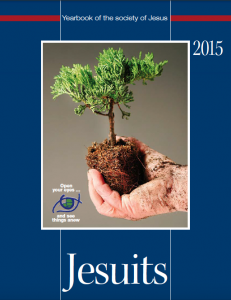 The 2015 Yearbook confronts the theme of ecology from a very particular point of view: the Society of Jesus’ growing awareness of this huge problem. The last General Congregation – the highest Jesuit legislative body – said much about it in 2008, affirming among things, “Care of the environment affects the quality of our relationships with God, with other human beings, and with creation itself. It touches the core of our faith in and love for God. The drive to access and exploit sources of energy and other natural resources is very rapidly widening the damage to earth, air, water, and our whole environment, to the point that the future of our planet is threatened. Poisoned water, polluted are, massive deforestation, deposits of atomic and toxic waste are causing death and untold suffering, particularly to the poor.”

The panorama presented in this Yearbook does not confront every problem connected with ecology, but it presents some examples of how we can act in concrete ways to limit damage to our environment. 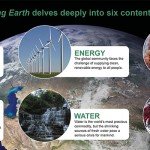 The ecological challenges facing our world are unlike any humanity has faced.  Educating students about these pressing 21st century challenges necessitates a 21st century resource: a free, online environmental science textbook for upper-level secondary school and beginning college students.  Such a work is the goal of the International Jesuit Ecology Project. 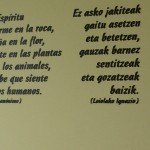 The Society of Jesus and Ecology

There is an increasing ecological sensitivity in human communities throughout the world.  Our conscience pains us as we behold the mounting evidence of environmental devastation: contamination of air and soil, accumulation of toxic residues, cataclysmic natural disasters, extinction of species, and extreme climatic phenomena such as floods, hurricanes, and droughts. 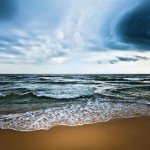 The Spirit of adaptation, vulnerability reduction, and decision-making in reconciling with creation

In the Formula Instituti of 1550, Saint Ignatius identifies the “reconciliation of the estranged” as a key mission for the Society of Jesus. GC 35’s focus on reconciliation as the call to “right relationships with God, with fellow human beings and with creation” gives a new impulse to this mission. 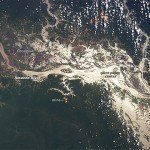 From Cardoner to the Amazon: Water from the same source

“Do you see the light now?” the Xapori (shamans) of the Yanomami tribe were asking those being initiated after a night passed in purification and preparation. “Do you see the light?” they insisted, as they prayed and sang and danced, their bodies painted and their heads adorned with the white plumes of the Royal Eagle. 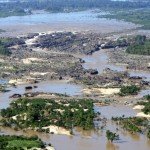 Engaging with minds and hearts for the Mekong River, a threatened Mother

Cambodia is usually known for its ancient stone temples, of which Angkor Wat is the most famous, or for the genocide that happened at the hands of the Khmer Rouge during the period of 1975-1979, which claimed around two million people. Cambodia also used to be the country with the most casualties in the world due to landmines and cluster bombs.