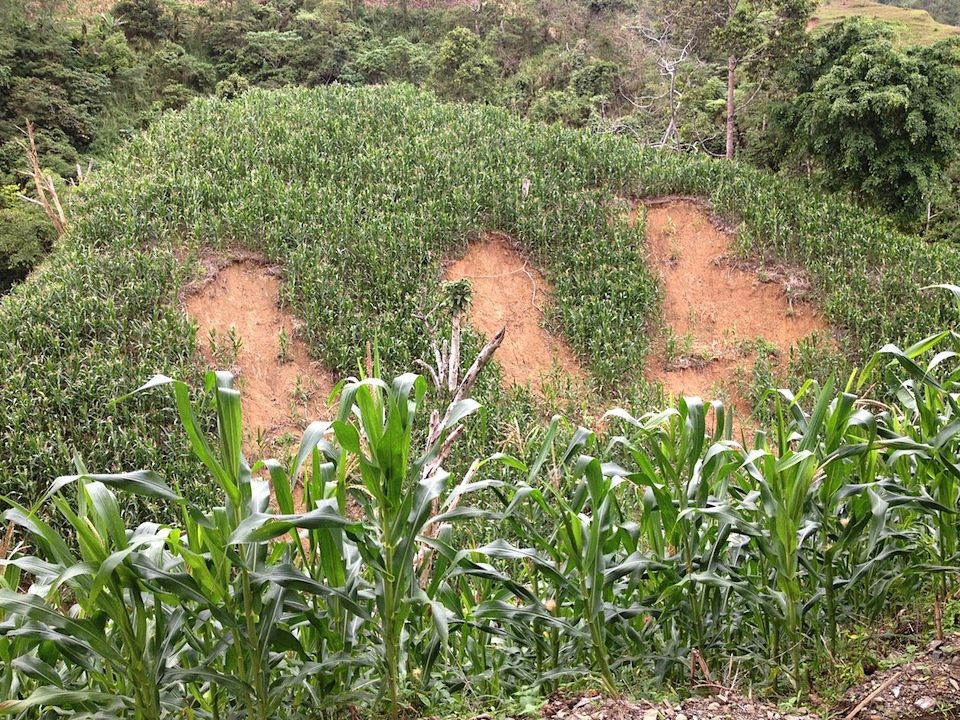 For the past four years, students from all over Asia participate in a course on human development and natural resource management for the University for Peace-Asian Peacebuilders Scholarship program. Part of the course is a one-week field engagement with an indigenous community in Sitio Bendum in Bukidnon, Northern Mindanao in the Philippines.

This year, one of the planned activities was a series of visits to nearby communities engaged in more intensive agriculture than practiced by the Pulangiyen, the indigenous community who live in Bendum. Their experiences illustrate the increasing vulnerabilities faced by agriculture-dependent communities: the higher risks of disaster due to rapidly degrading environments and of food insecurity.

As the University for Peace students made their way to Sitio Bendum, a few stops were made along the way to view the landscape. This gave the students an opportunity to see the changes in the course of the river, which due to flooding and siltation has become increasingly broad and braided, thus overtaking hectares of croplands. The stops also gave time to see the extent of landslides in the area, up to a hundred visible at any one time. The landslides in two neighbouring villages, Barangay Silae and Barangay Mapulo, are not large mass wastings from mountaintop to bottom. Rather, the landslides are often no more than 50 by 50 meters, with the point of greatest depth being no more than a few meters; the result of the ooze of water occurring at what would be a spring point if it were a forest, or where water is forced to come to the surface again due to parent rock material. The greater instability is due to a combination of more intense rains and more intense agriculture.

Migrants over the last century considered Silae an old indigenous stronghold, a good place to settle down, having very fertile soil that was highly suitable for agriculture. In fact, many people came to Silae to invest their money in farming. The community members who joined the meeting with the visiting students shared that they used to feel very safe in Silae and that they considered themselves fortunate in that they did not feel the impact of strong typhoons. There was a common misconception that Mindanao is a “typhoon-free” island. This mistaken view has resulted in a lack of awareness and preparedness among many communities in Mindanao caught off-guard by the unusually intense rainfall in the past two years.

Typhoons Pablo (Bopha) and Quinta (Wukong) that hit Mindanao last December 2012 flattened and washed out the farms and crops of most of the community members. Aside from the landslides, communities also face the risk of overflowing streams. Some community members choose to live close to waterways, primarily to be close to a source of water for waste management purposes. In Silae, risk to life is low at present, since housing is well away from the hazards of landslides, but given the unpredictability of weather events, risk to life needs sufficient focus.

Aside from the risks due to natural hazards, these communities must contend with food insecurity. The system by which the maize industry operates – primarily supplying the market with animal feeds – is creating greater food insecurity for agriculture-dependent communities. The main source of livelihood for many residents of Silae is farming, both upland cultivation and rice on the flat land. Because of the typhoon damage to their farms, a few community members mentioned no longer being able to sustain farming activities due to lack of finances. Some are already in debt to financiers who provide the farmers with seeds and agricultural inputs, while others have resorted to working as labour on other people’s farms.

Few farmers today continue to plant native maize (yellow or white) for household consumption, since these varieties are not high yielders like the hybrid variety that has become widespread over the last two decades. Many of the farmers choose to plant ‘hybrid maize’ that is now actually Bt maize (a genetically modified organism or GMO) because of the promise of increased profits. This GMO intrusion into the upland small farmer context is seen to be aggravating the already unstable production of maize, usually grown in corporate farmlands on the plateau, resulting in critical land management changes.

The terms for getting the new “wonder” seeds include the maximum cultivation of land that demands not only working on every field possible but also scrubbing out marginal vegetation along field borders and hollows. This gives the trader maximum volume returns, but has resulted in the uplands not giving the projected returns that were presumably estimated based on corporate rolling farmlands. Hence, the farmer never makes the projection, falls behind in payments, and loses ‘ownership’ of the land to the trader who can then put even tighter restrictions on land use, to the point of even blocking out basic food needs for the family that now have to be purchased.

The shift from planting a range of crops to monocropping either rice or maize is creating a crisis of food for farmers. Cultivating mostly cash crops, like maize and rice for the market, makes securing a daily food supply a real pressure for many poor families, on top of other pressures requiring cash outlays such as securing basic education for the children and responding to the family’s health concerns.

The visit allowed the University for Peace students see the contexts within which many will be working in the future. For many, it is tempting to think that development projects will be the “quick-fix” or will provide the “win-win” solutions that respond to the needs of communities. However, this has not been the case. Some people are now living off government dole-outs and are unable to do anything for themselves and these types of government responses often create inefficiencies and dependencies and people simply wait for projects to be given to them.

The impact of extreme weather events on both the environment and people’s lives becomes doubly devastating when compounded with exploitative market arrangements. Simply implementing projects will not provide and sustain greater security and human development; what will is the community capacity to make basic plans, with an understanding of the market they engage, and having a clear judgment in knowing that prices will fall when there is a glut. Policies also need to be enacted that do not expose people to high risks for the sake of global compliance that breeds and increases social and environmental unsustainability. Enabling community capacity to develop the adaptations needed and to apply local wisdom that will ensure their security in food, shelter, and other social needs for human development is a critical part of sustaining local productivity and community living.