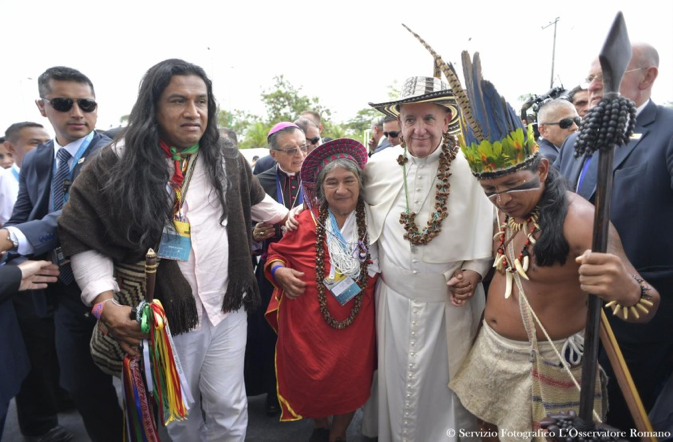 New ways of relating to the earth and to each other are needed.  Dialoguing with indigenous peoples provides a way of broadening our imagination while working with those who will be most affected by environmental change.  “Christian spirituality proposes an alternative understanding of the quality of life, and encourages a prophetic and contemplative lifestyle, one capable of deep enjoyment free of the obsession with consumption.” (LS 222)

“Life’s always better with a little retail therapy.”  I recently came across these words on the cover of an airline magazine.  They suggest that the consumption of high quality products will enhance an individual’s well-being and happiness.  Shopping to feel better about life is a cause for concern considering our annual use of the equivalent of 1.6 Earths to provide resources and absorb waste.

Human well-being is completely dependent on the environment and the paradox of the ecological crisis is that efforts to improve the lives of some people have made matters worse for everyone.  This is due to an overly narrow focus on two aspects of well-being – income and economic growth.  Well-being is not wealth; development should not only be defined by economic growth.  What is needed, is an integral vision of human development.

The well-being of Indigenous Peoples is directly affected by changes in environmental quality.  They are totally dependent on the environment and for them it is a sacred space and not just a ‘service provider’ (LS 146).

We have much to learn from indigenous communities about what constitutes the ‘good life.’  They have lived ecologically sensitive lives for centuries by maintaining harmony with their surroundings and have a proven track record in natural resource management.  Their ways of relating to each other and to the environment provide alternative approaches to mainstream development agendas based on the large-scale exploitation and extraction of natural resources.

Laudato Si’ proposes that they be the principal dialogue partners when assessing the impact of environmental interventions on their lands and way of life (LS 146).  In fact, they could be our principal dialogue partners in exploring an anti-consumerism paradigm.  They show that it is possible to live well with less.  Pope Francis is a leading example of promoting dialogue with indigenous peoples since he specially makes time on his papal visits to listen to them.

Why have indigenous peoples been such effective conservationists?  One argument is that it has something to do with their worldview, which sees the environment not as a depersonalised entity, but as an ‘other’ with whom they relate.  This is similar to the view advanced in Laudato Si’, that the ‘environment’ is “a relationship existing between nature and the society which lives in it. Nature cannot be regarded as something separate from ourselves or as a mere setting in which we live.” (LS 139)

Underpinning indigenous actions and culture is a distinct way of looking at the world which echoes Saint Francis’ relational approach to the cosmos.  I recently completed research among two Makushi communities (Karasabai and Tiger Pond) in the South Pakaraimas where the Jesuits in Guyana have been ministering for more than 100 years.

The aim of the research was to understand how Indigenous Peoples conceive of well-being and their understanding of the environment’s role in contributing to it.  The main finding was that well-being is perceived in relational terms.  Having good relationships within the family and community and living and working within the villages were the most important determinants.  Dimensions of well-being such as income are primarily viewed through a relational lens.  For example, the purpose of having an income is not to amass an individual fortune but to provide for the needs of children and family members.

Acknowledging our interconnection is the first step towards an ecological conversion but emphasising our interrelation and the values governing good relationships is the true key.  Relationships matter!

The Makushi conception of the ‘good life’ is grounded in relationships.  It is clear that individuals view their well-being as being bound up with the well-being of the community and the well-being of the environment.  The ethos of the villages is unity and several stated that “we think of the village as one.”  Therefore, inequality, selfishness, and greed are frowned upon and people are respected and seen as flourishing if they are generous and contribute to the life of the community.

Six themes emerged from an analysis of the Makushi perceptions of the environment.  The environment is seen as a mother, a gift, a facilitator of religious experience, a source of cultural identity and freedom, and a place where familial, community and intergenerational ties are strengthened.  Frames and images influence how we relate to the environment.  For example, seeing nature as a Mother conjures up the image of being provided and cared for despite our shortcomings.  Social norms dictate that good people do not abuse parents and interactions are marked with care, generosity, and reciprocity.

Indigenous ideas on what constitutes a ‘good life’ broaden our imagination and offer an alternative worldview and resistance to consumerist concepts like ‘retail therapy’ which contribute to environmental degradation.  Accumulation is not part of the Makushi culture since being rich is not an end in itself.

Conceiving of well-being as relational emphasizes the complex social and environmental nature of the ecological crisis and helps us to see that rights ways of relating to the environment and to people are similar (LS 48,139,141).

Developing relational values – the preferences, principles, and virtues associated with relationships such as care, respect and reciprocity – go beyond approaches that argue for the intrinsic or instrumental value of nature and highlight that what’s good for nature is what is good for sustaining any relationship. (Chan, Kai MA, et al. “Opinion: Why protect nature? Rethinking values and the environment.”  Proceedings of the National Academy of Sciences 113.6 (2016): 1462-1465. doi: 10.1073/pnas.1525002113)

Life’s always better when we relate well with others, the environment and with God.

Joel Thompson SJ is a Guyanese Jesuit scholastic who is interested in questions surrounding the relationship between technology, ethics and the environment.  He has recently completed an MSc in the Environment and Development at the London School of Economics and Political Science. Joel can be reached through his email: joey_thom@hotmail.com.