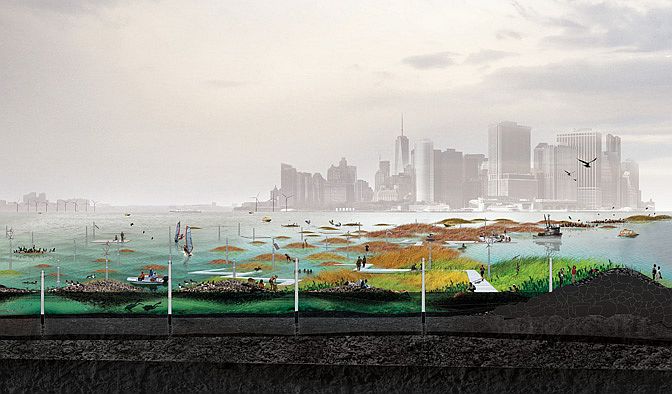 Tropical cyclone Sandy killed 71 people when it blew through Haiti and Cuba last October.  In Haiti, over 370,000 people are still in tent cities since the January 2010 earthquake and the recent droughts and now floods have destroyed crops, compounding the problems.  Even if the winds were light and the number of deaths low in comparison with previous disasters, it will certainly take a little more time for society to get back on its feet.

When Sandy left the Caribbean and headed north, it sped up and gained hurricane status.  By the time it made landfall in the eastern United States, the storm merged with a winter weather system coming from the west and turned into an extra-tropical cyclone.  Ordinarily, as the wind fields widen in such a transition, the cyclone weakens, but Sandy’s winds retained their strength.  The warmer-than-usual Atlantic Ocean water contributed to the storm’s energy, while the weakening jet stream from the west did nothing to push the storm seaward.  At the center of the cyclone is an area of low pressure sustained by the strong winds.  This in turn raises water levels over a large area of the ocean proportional to the extent of the cyclone — and Sandy extended out almost 935 kilometers.

On top of the surge, wind waves add to water height creating a storm surge of raised water.  Storm surge potential is strongly related to the size of the area — as well as coastal geomorphology and storm track relative to the coastline.  New York Harbor is shaped like a funnel, allowing the water to run up it and onto the land.  Coinciding with the spring tide, Sandy hit the US coast with a surge height of 4.2 meters.  More than rain or wind, it was this that caused over 100 deaths and US$33 billion in damages along the East Coast

Was Sandy a freak event?  Not really; and it is not even the worst-case scenario.  The surge height did surpass the three-meter record in 1960 for all hurricanes making landfall in the eastern United States.  The maximum wave height is almost two meters higher than the record that was only broken last year.

But the factors that caused the high water displacement are not unheard of.  Sandy’s extent is not the largest nor were its winds the strongest (only Category 1 on the Saffir-Simpson scale).  Even its kinetic energy, which is determined mainly by wind speed integrated over how wide an area the winds are blowing, is not as strong as that of Hurricane Isabel in 2003.  Its coincidence with another weather system coming from inland and a spring tide may be unusual, but its path is similar to a handful of other cyclones recorded in the last 150 years.  Sandy may be an extreme event but it is not entirely off the charts.  The real question is how do we deal with events like this that perhaps have an increasing probability of happening again?

New York, the “apple” in the eye of the storm, was in shock in terms of the deaths and damages.  Eight million people were left without power.  Anger grew out of the frustration that a Category 1 hurricane can ruin systems in such a sophisticated city and leave people so vulnerable.  As a result, the United States is again “swept into climate adaptation debate”, while others argue about how the damages and federal spending for insurance might drive the economy.

Some of the science behind this needs further unpacking and internalization in society.  Surface waters were 3°C higher than average and well within the local temperature effects that can be generated by climate change.  Of that warming, 0.6°C is estimated to come from the global increase, which is not indicative of regional variation.

Infrastructure such as a system of barriers to stop storm surges is an investment the rich world is likely to afford.  The Thames Barrier in London was built for US$2 billion and costs about US$10 million a year to operate.  The shock of Sandy helped resurface the plans of 10 years ago when Malcolm Bowman and others proposed barriers at half the cost of present damages.  Kate Orff proposed a more natural barrier utilizing oyster beds and wetlands.

After Sandy, the finger pointing may seem academic, but this begs the question of whether or not the alternatives would have been worth it had there been enough political focus.  Of course there are pros and cons in the use of barriers, and as a lone strategy it will not be adequate.  Perhaps as people prepare for the next extreme event, in what is now a return period of 3-20 years instead of the average 100-year interval, politicians will see the need to realign priorities.

Politics will be important, for sure.  Mayor Michael Bloomberg of New York City was undecided with whom to side with, days before the presidential election. Soon after Sandy, he hedged his bets on Barack Obama.  Public perception and culture have been challenged.  To rise up and rebuild despite the damage is a feeling that can be shared by all.  But can we learn from our mistakes?  What could we have done to alleviate this or that effect?  Are we capable of questioning the status quo?

Sandy reminded us of recent disasters on the other side of the world.  Typhoon Ondoy (Ketsana) in 2009 hit Metro Manila in the Philippines (Marikina City specifically), a country with a history of disasters.  In the same year, a storm surge in Manila Bay occurred that was never before experienced.  Sandy in New York will bring further reflection on Katrina in New Orleans and the occurrence of storm surges will initiate new infrastructure there and probably around the world.  Shanghai is a comparable coastal city to New York where floodgates have existed for the past 20 years, though judged inadequate already in providing protection during a worst-case scenario.

Typhoon Ondoy brought rains that caused the Marikina River to exceed its record discharge.  In the years following Ondoy when protracted rains fell in Marikina, people were a little more prepared  and were proactively seeking information to help them take action for themselves and not relying on others to make decisions.  The flood caused by Typhoon Sendong in Cagayan de Oro City, also in the Philippines last year, displaced thousands who still do not have secure housing and access to critical livelihood.  Major reviews by responsible government line agencies, local governments, civil society organizations were undertaken afterwards, focusing attention anew to disaster risk reduction and preparedness.

Can we use the time we have, not only after a recent disaster to clean up and rebuild, but to meaningfully engage in discussions about extreme weather events and how to deal with them?  Are we able to properly respond to people at risk and discuss whether displaced communities should be allowed to return and settle once again in flood-prone areas or are we going to find other ways to adapt?

(Editor’s note: Pedro put down these notes together while in Chicago when Sandy hit the U.S. east coast.  Soon after, he met up with Wendy who provided the scientific inputs.)