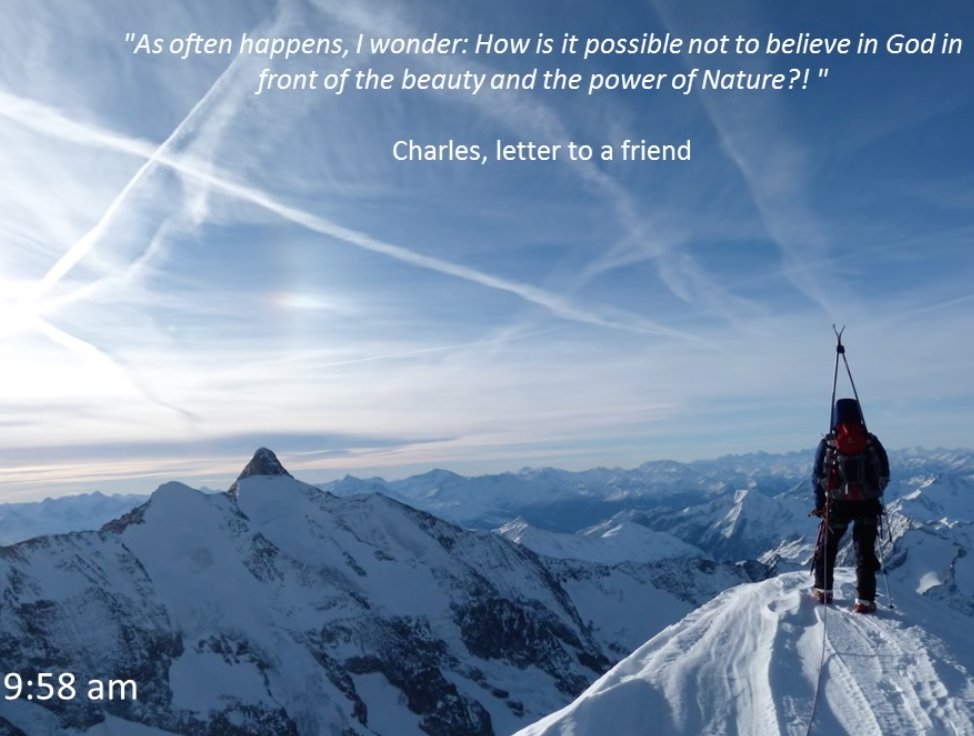 It was an extraordinary discovery eight months after a freak avalanche on the glacier of Armancette led to the deaths of 22-year old twin brothers, Pierre and Charles, mountain lovers and experienced mountaineers returning from a hiking tour through the Dômes de Miages in the Mont Blanc Massif on the morning of 24 December 2014.

A mountaineer found Pierre’s camera, destroyed but for the photographs he took up to the moment before he and Charles fell.  Time-stamped from 7:01 am to 10:32 am, Pierre’s photographs captured the magnificent beauty of the mountain they reached and the surrounding view from the summit.

Family and friends put together a video of these photos, and as lovingly written in the accompanying text of the video, “Pierre and Charles give us a testimony of their last thanksgiving, their Laudato Si’, this celebration of creation, a few minutes before they were called back by their Creator.”

Loïc, father of Pierre and Charles, shared with Ecojesuit last January his thoughts:

“Fairly quickly after the death of our twin boys on December 2014, I and my wife Véronique felt by intuition that this so dramatic event may be lightened by the forthcoming Laudato Si’ – although the encyclical was not issued yet.  Pierre and Charles’ love of both nature and God was so strong and so obviously related to each other, for Pierre especially.

“This intuition started with an amazing coincidence.  When preparing the booklet for their funeral, my other children were looking for a motto to write below Pierre’s picture.  On Pierre’s Facebook profile, they discovered that he was quoting a reflection from John Muir stating with humor how the mountains were a great place to think of God.  As Pierre wrote, quoting John Muir, ‘I’d rather be in the mountains thinking of God, than in Church thinking about the mountains!’  We decided to take and print this quote in the booklet we prepared for the farewell mass.

“None of us knew anything about John Muir, his name was unfamiliar to us.  We did not check who the author was at that time.  It was only two months later, after making a quick research about him that we discovered that John Muir was an incredible lover of nature, mountains and glacier, a famous American naturalist, early advocate of preservation of wilderness in the United States, and a real scientist while keeping a truly spiritual approach of nature.  These are the various reasons why Pierre liked him probably.  But the most incredible coincidence (what the pure British would rather call ‘a divine appointment’) was when we realized that John Muir died exactly 100 years before our twin boys – on 24 December 1914!

“Pierre was also an excellent photographer and the very first thing Pierre and Charles did after returning from any hiking tour together was to share – with jubilation – their photographs with their family and friends.  I even mentioned that when saying a few words about them at the beginning of the funeral mass.

“When eight months later a mountaineer found Pierre’s camera with undamaged photographs among this vast stretch of ice and rocks – a totally unlikely and extraordinary discovery – we understood that Pierre and Charles were doing what they used to do after each of their previous hiking: sharing their thanksgiving with us, their Laudato Si’, this time as a testimony.  Thanks be to God for this indescribable gift!”

To know more about the inspiring lives of Pierre and Charles, please visit this dedicated website in French and English, Pierre & Charles  and the video of the magnificent photos that Pierre took can be viewed here.