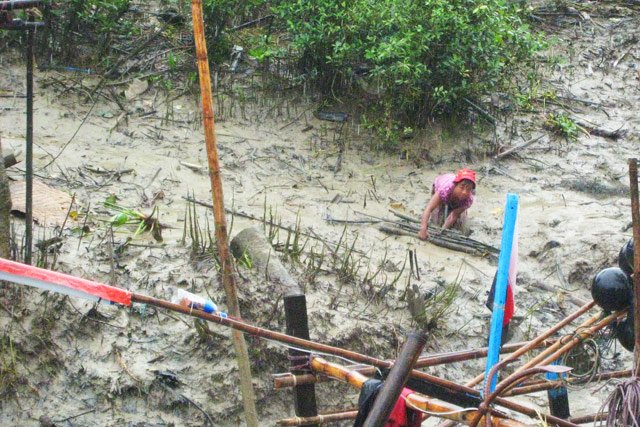 For the Jesuits, local witness and global awareness are calling many individuals, and the Society of Jesus as a whole, to do new work on the front lines of the ecological crisis.

This work looks very different at times. Fr. Amalraj Chinnapan helps communities in Myanmar to find housing and restore their livelihoods after cyclones while Fr. Pedro Walpole uses research at the Environmental Science for Social Change in the Philippines to help communities make safe plans for when the urban poor are relocated. Fr. Jim Profit of the Ignatius Jesuit Centre in Canada helps develop new retreats that enhance our spiritual understanding of our relationship with our environment.

The responses within the Society of Jesus itself and communities of Jesuit-educated people may be diverse, but these are rooted in a common sentiment: a commitment to establish right relationships with God, others, and creation. Since the 1980s, the Society has witnessed the connections between justice for people and care for creation. Reflecting upon the experience of individual communities where people on the margins suffered the worst consequences of natural disasters, a Jesuit task force came up with this conclusion from Healing a Broken World: “We Jesuits cannot shut our eyes in front of the tragedy happening increasingly to those we proclaim to be in solidarity with.” Jesuits recognize that the poor are first in facing the ecological crisis. Acting to address that crisis requires recognizing the interrelated problems of pollution, consumption, climate change, monocultures, biodiversity loss, poverty, and inequality.

As Jesuits recognized the ecological crises worldwide, the Society created advocacy networks on a number of topics, and included ecology as one topic that required particular attention. In order to address ecology in a more coordinated way, different regional representatives reported about the different experiences of ecological injustice faced by Jesuits and their communities.

At a meeting this fall, Fr. Xavier Savarimuthu reported about the trouble facing parts of India as communities struggle to find safe drinking water in the face of arsenic poisoning. Other communities in India face central planning efforts to create special economic zones, where communities would be displaced because of the construction of megadams. Fr. Pedro Walpole spoke about his experiences in the Philippines, where forests were razed to make way for palm plantations. Fr. John McCarthy shared how, within Canada, indigenous communities were threatened by the expansion of oil exploration, oil that contributes to climate change. The examples in the discussions and in the reports from across the world illustrate the depth and breadth of the ecological crisis.

The advocacy network of the Jesuits found out that despite the many difference between the issues of climate change, land ownership, industrial agriculture, and the privatization of resources, the core of many of these issues were issues of water-oftentimes the right to water. The Jesuits tasked with guiding the Global Ignatian Advocacy Network (GIAN) Ecology recognized how water was a pivotal resource across the globe. The right to water plays out in justice issues across the globe: commodification and privatization in the developed world, desertification and lack of basic water needs in Africa, flooding and extreme rainfall events in the Pacific, arsenic poisoning in Southern Asia, and a combination of transboundary issues, rights and access, water pollution and contamination in Latin America. The GIAN Ecology will advocate and raise awareness about the right to water at multiple international levels — including participating in the post-Rio consultations World We Want 2015, World Water Week, and international conferences such as the International Summit on Water Cooperation for inclusive growth.

While the Jesuits are coordinating to address the issue of water on an international level through GIAN, Jesuit people across the globe are acting in a myriad of ways to care for Creation. Loyola University Chicago, through its Institute of Environmental Sustainability, is undergoing a campus wide transformation, coupling physical transformations to geothermal energy and farming with classes and programs to inform students on ecological issues. The Pan-Amazon Observatory is working to change the decision-making process surrounding megaprojects, so that socio-economic impacts and local voices are respected.

The global reach of the Society of Jesus gives the Jesuits a wide view of the health of the world, and there is great hope that Pope Francis, a Jesuit himself, will prioritize the environment. As Cardinal Jorge Mario Bergoglio, he led the process in drafting the final recommendations of the Fifth General Conference of the Council of Latin American Bishops in Aparecida, Brazil in 2007 which praised the plants and animals of the Amazon region while criticizing extractive industries and agribusiness for failing to respect the economic, social and environmental rights of local communities, especially Indigenous Peoples.

As the Jesuits move to ensure the right to water for all through GIAN, it seems clear that they are moving in a direction that will be in alignment with Pope Francis’ stewardship of the Catholic Church as a whole. With humility and witness, the Jesuits have seen the struggles of the communities that they work with and do realize the environmental aspect of those struggles. With such witness, they are already beginning to fulfill Pope Francis’ Easter message:

“Let us accept the grace of Christ’s Resurrection! Let us be renewed by God’s mercy, let us be loved by Jesus, let us enable the power of his love to transform our lives too; and let us become agents of this mercy, channels through which God can water the earth, protect all creation and make justice and peace flourish. Peace to this our Earth! May the risen Jesus bring comfort to the victims of natural disasters and make us responsible guardians of creation.”

Elizabeth Haney, or Liz, joined the Center of Concern in 2012 as the Center’s first Jesuit volunteer and was the Coordinator for Ecology and Development until she left mid-April 2013. Liz’s work focused on international climate policy, especially climate financing for adaptation and mitigation, as well as food security. The Center of Concern is a think tank in Washington, DC, USA that researches, educates, and advocates out of the Catholic social tradition to promote global social justice. Liz can be reached through her email: haneyel(at)gmail.com.