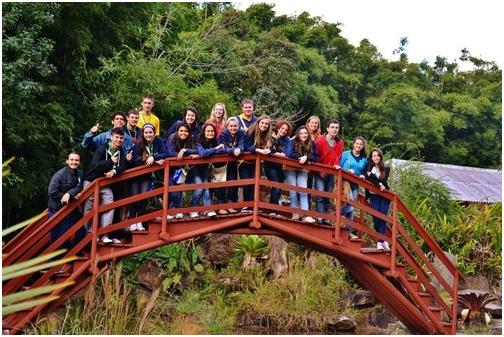 MAGIS 2013 began in Salvador on 12 July with about 2,000 youth participants from 50 different countries and linked to the Society of Jesus as students, alumni, or with the youth ministry.

From 12 to 15 July, they gathered in Salvador and from there, they were distributed to over 40 different locations in Brazil, from the well-known capital cities to the remotest, in order to participate in social, cultural, and ecological experiences. They met again in Rio de Janeiro on 22 July to join the activities of the World Youth Day.

It was in Nova Friburgo (in the State of Rio de Janeiro) where one of the experiences took place in the framework of MAGIS 2013. Nova Friburgo has a population of 182,000 inhabitants and became famous in 2011 due to the immense floods and devastating landslides that caused 820 deaths and with more than 200 people missing. The city was fully covered with mud, the largest natural disaster that took place in Brazil.

Today, looking at our society and its possibilities, it is more urgent to “recreate” our way of looking at reality in order to construct a new time for sharing, respect, a time to acknowledge our belonging to the great miracle of life, and that we are all children of God and brothers.

This experience aimed to “Recreate-E” each pilgrim with the Creator and the ultimate expression of his art: the Earth. I say “aimed” because too many other goals emerged as the experience progressed and as the group members got to know each other and developed linkages.

During these days, we saw nature, felt and saw God in all things – culture, people, flora and fauna, in the work we shared. We started with the “mud,” putting our feet on the ground through art – with the discovery of healing through nature, with the wise words of the people of the land, with the elders. We learned about bio-construction, food, and the beauty, power, and importance of every living thing. We heard good music, danced, practiced capoeira, reflected below the shadows of the giants Jequitibás trees – one pink, one white. The more we deepen in our roots, the more we raised into heaven. We talked, laughed, cried, prayed and above all, we gave deep thanks for being here.

On the first day of the experience “Recreate – an experience of Art and Spirituality” held in Nova Fribrugo, the group of pilgrims visited one of the communities most affected by the tragedy that occurred in January 2011, located in the third district of Nova Friburgo, called Córrego D’Antas. There we shared the history of the city since the catastrophe.

It was in this area where major landslides buried entire buildings. We developed the parallelism “mud/mud and death/creation,” talking about the creation of the first human being, the Father Creator, and Mother Earth who gives us everything. Then we visited Nego Garden, an open-air studio with sculptures in clay and moss, and we also visited the apiary of Friends of the Earth. They proposed an interesting reflection from the fact that bees are responsible for pollinating 80% of world flora.

On the second day we visited the Instituto Pindorama, a non-government ecovillage that seeks to learn from nature, inviting people to act in this time of global change and in which our destiny will depend on intelligent and organized actions, led by initiatives with a long-term vision. We started with a 40-minute contemplative walk through an Atlantic Forest, and then received explanations about bio-construction. Later on, we undertook adobe construction according to traditional techniques and covered walls with the mud. We had a vegan lunch and were introduced in the use of bamboo to make furniture and musical instruments.

The third day we visited the community of Lumiar, the 5º District in Freiburg. It is one of the liveliest communities maintaining the culture of their ancestors. We had an activity at the cultural center Oficina-Escola As Mãos de Luz called “Treasures of the Earth: our history, our people.” Through a long walk, we identified local flora and fauna, medicinal herbs and their uses. We talked with herbalists and elders. We finished with a capoeira workshop and also learned indigenous and popular dances to greet the Father Creator and Mother Earth.

The fourth day we did a meditation using a giant mandala and shared the day with the Kalapalo, one of 17 indigenous communities from the Upper Xingu region of the state of Mato Grosso. After the presentation of their culture and traditions, we had a long discussion about our relationship with the Earth, and then we went for a contemplative walk. Each one drew up intuitively their own mandala in ceramics and we dedicated a long time to share this experience.

The fifth day we visited a pottery studio that produces pieces inspired by nature in a way entirely oriented towards sustainability, using natural elements. As the potter explained his work and the history of ceramics, the pilgrims were shaping the clay freely and creating a variety of forms. It generated a quick connection between the history of this artist, whose father was a Czech craftsman who brought in his suitcase the passion for ceramics, and the pilgrims. Each one of us also wants to – as if we were artists – shape a unique life respectful of each other and with the environment in which we live. We went through the whole process, from the inspiration that originates the work, to the oven that makes it consistent. Then we celebrated with the people of the community, we danced, and the music brought us closer to the people of Nova Friburgo.

Nova Friburgo pilgrims joined the other participants of MAGIS in Rio de Janeiro where nearly two million young people from all over the world attended the World Youth Day.

This article was drawn from the blog of Diário de Bordo por Jeany Amorim  in MAGIS Brasil and the MAGIS 2013 web site.