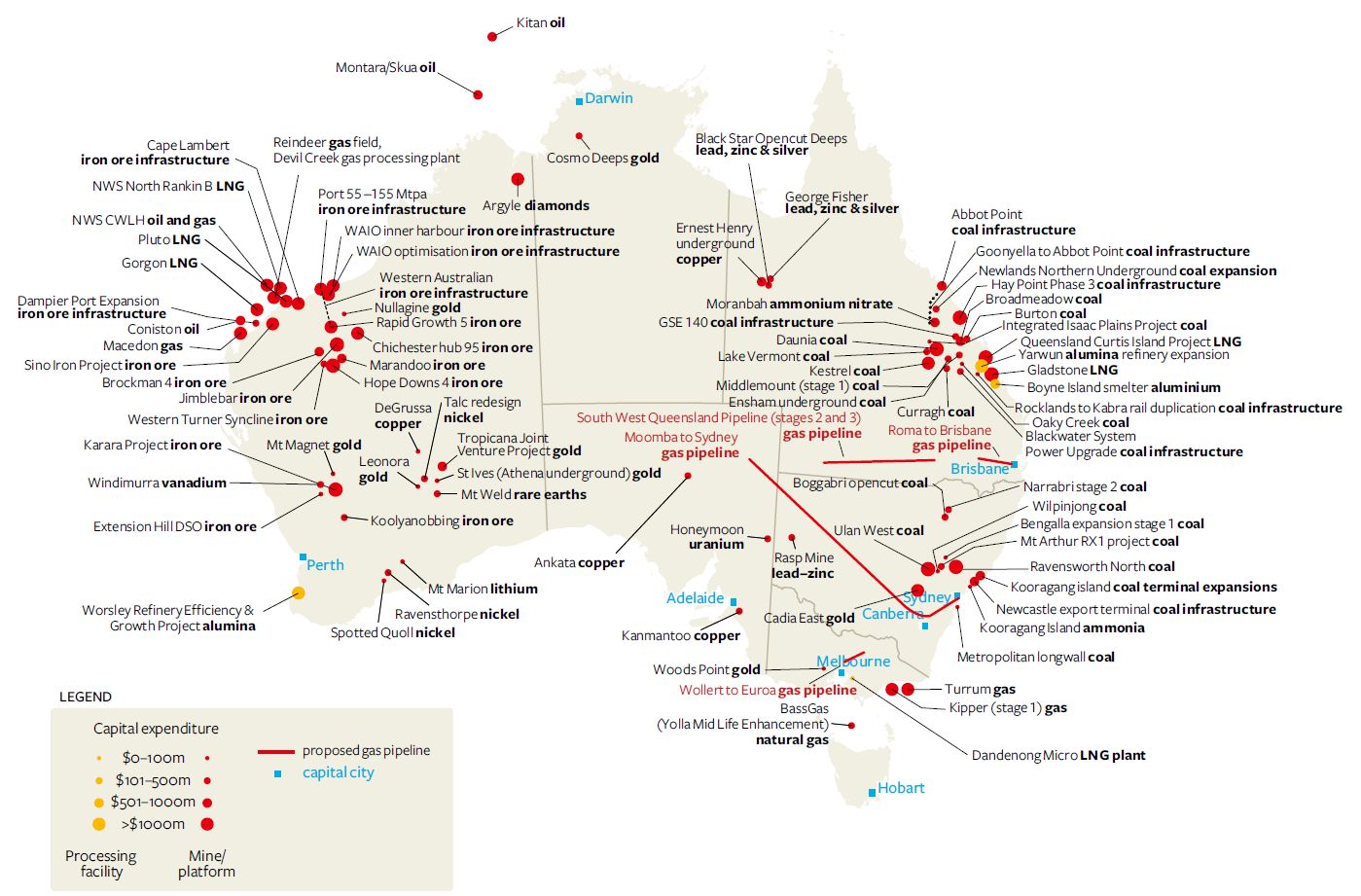 The role of mining in Australia is a complex one. Western Australia, in particular, is rich in iron ore while there are significant deposits of natural gas, gold, coal, uranium, opals, lead, and zinc scattered across the country.

Mining and exporting these minerals are extremely lucrative.  According to the Australian Bureau of Statistics, mining grew to just under 10% of gross domestic product, nearly doubling in the years between 2003 and 2008.

The industry is also widely credited with allowing Australia to maintain its economy in surplus while similar European and North American economies adopt ever-tightening austerity measures to counteract the on-going fallout from the banking collapses in 2008.

And mining has made fortunes.  Australia hosts the world’s richest woman, Gina Rinehart, who is looking to expand her mining interests to cover media ownership as well, while mining magnates Clive Palmer and Andrew Forrest have spent millions on philanthropic causes.

This status as a mainstay of the economy has its disadvantages.  Most immediately, both major political parties have become beholden to the mining industry and fear the advertising power that its money can buy (while donations to political causes in Australia generally need to be reported, they are largely unrestricted).  Two brief examples demonstrate the problem.

The previous Labor Government (under its former leader, Kevin Rudd) announced a plan to overhaul the outdated royalties system allowing miners virtually untaxed access to what are, by law, largely Government assets.  Australian Election Commission figures (reported in Fairfax’s Sydney Morning Herald newspaper) show that the mining companies spent A$22 million campaigning against the new tax until Rudd’s removal by the Labor Party.

After his replacement by the current (Labor) Prime Minister, Julia Gillard, the mining tax was reconsidered.  She entered into negotiations with three of the major mining companies (BHP Billiton, Xstrata, and Rio Tinto) for a limitation of the tax and confinement of its effects to miners’ extraordinary profits.  While the Government refused to release details of the revenue raised by the tax, there are moves afoot in Parliament to force it to do so: Rupert Murdoch’s Australian newspaper, among others, alleged that none of the three miners which negotiated the tax with the Government paid anything in the first three months of its operation.

The opposition (Liberal-National) Coalition, on the other hand, is now the major recipient of mining company donations, with just over A$3 million received in 2010-2011, according to Australian Election Commission figures.  The Coalition promised to repeal the mining tax, even in its current weakened state.  Despite its leader, Tony Abbott, having previously spoken in favour of a carbon tax, he also promised to abolish the limited carbon tax, which was introduced by the Labor Government as the price of support by its junior coalition partner, the Greens.

All of this, not surprisingly, has implications in the socio-environmental sphere.  The National Radioactive Waste Management Act 2012 (Cth), that allows dumping of radioactive waste (including that imported from overseas), limits the ability of affected parties to challenge the Minister’s decision to nominate a waste dump.  Although a challenge is currently before the courts, to the nomination of a site on Muckaty Station (Aboriginal freehold land in the Northern Territory) as a radioactive waste dump.  Also, while mining undoubtedly created jobs for Indigenous Peoples in the area, there are also claims of increased cancer rates in those living near uranium mines.

Government regulatory responses to mining pollution have also been the subject of criticism. A Sunday Times investigation in 2012 has claimed that Western Australian authorities have failed to investigate dangerous levels of arsenic, cyanide, mercury and sulphur pollution in that state.  Meanwhile, in Mount Isa in Queensland where Xstrata runs a lead mine, a medical survey* in 2010 headed by Professor Mark Taylor of Macquarie University discovered that:

“11.3 % of children aged between 1-4 years in Mount Isa (n = 400) have blood lead levels greater than 10 μg/dL.  The outcomes of this study revealed clearly that not only are the policy approaches inadequate in Mount Isa [because they deal with secondary rather than primary prevention], but that the emerging evidence shows that current national policy guidelines for acceptable maximum levels of lead exposure (10 μg/dL) are too high by 5-8 μg/dL.  This latter point is significant because ~40% of Mount Isa’s children under 5 years of age have blood lead levels of >6 μg/dL.”

Significantly, the report attributed these levels directly to mining.  The Government’s National Health and Medical Research Council currently still maintains that the existing level of 10 μg/dL is appropriate as a level at which exposure to lead should be investigated, although it does go on to state that this is currently under review.

On the other hand, the mining lobby is increasingly competing with another important feature of Australian political life: agriculture.  The hydraulic fracturing or “fracking” of rock to siphon off natural gas is particularly sensitive, with increased competition between farmers and miners over land and the extraction process implicated in contamination of the water table and increased risk of seismic activity.

As this overview shows, mining is a source of great wealth for Australia but its socio-ecological benefits are much more mixed.  The sheer power of the industry, however, means that a balanced and informed conversation on these issues, especially at government level, is yet to start in earnest.

*The full description of the Mount Isa Contaminant Research Study (pdf) can be downloaded from the site of Professor Mark Taylor, Environmental Science, Department of Environment and Geography, Macquarie University.

Justin Glyn, SJ is a third year Jesuit scholastic studying theology and philosophy in Melbourne.  He previously practised law in South Africa and New Zealand and completed a PhD in international and administrative law in 2008 and he can be reached through his email: Justin(at)jtc.edu.au.