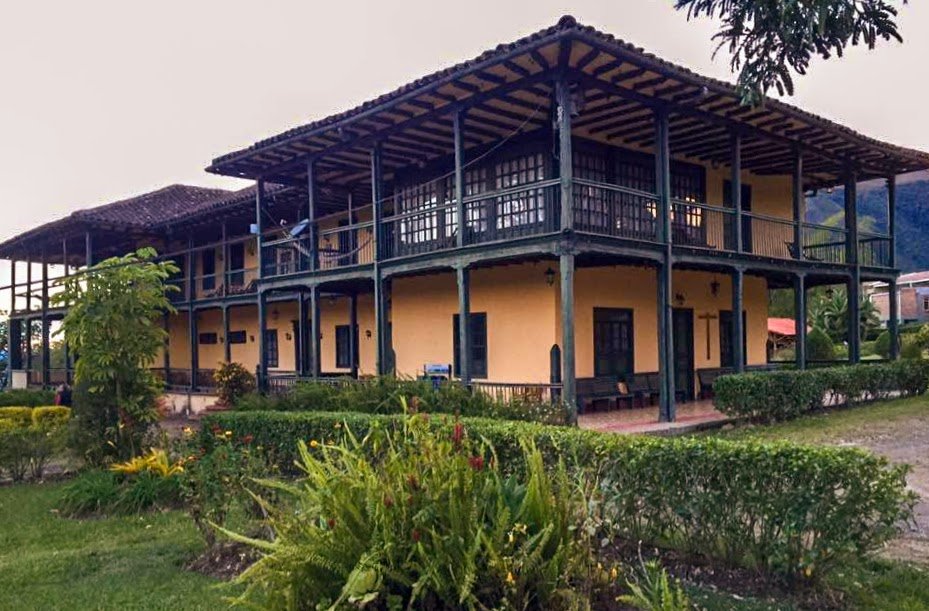 Consumers are gaining concern over the sources of our food.  Is it farmed sustainably?  Are dangerous chemicals used, or is it produced organically?  How are the producers (farmers) compensated for their labors?

With these questions in mind, I was happy to discover a Jesuit-owned coffee farm called Villa Loyola or Finca Loyola that advocates sustainable agriculture in Chachagüí, in the the Nariño region of Colombia.  It is completely organic.  Villa Loyola is a large operation with all its staff and laborers, not to mention their specialization on bamboo-based carpentry.  But I focus here on the coffee that is grown and traded from Villa Loyola.

Coffee has a long history in Colombia, possibly starting with the Jesuits.  It is reported Jesuits first brought coffee to the country.  Decades ago, one Jesuit even hybridized strains of coffee, and two of his plants are still thriving in Bogotá and grown at the Villa Loyola.

My host was Father (Padre) José Alejandro Aguilar Posada SJ, a Jesuit priest from the Colombian Province of Jesuits.  He has a doctorate from the University of California, Berkeley, in sustainable agriculture.  He goes by “Padre Joe” (the English pronunciation of the nickname for Joseph).  We spoke in both Spanish and English.

Padre Joe started the tour in the lab where the farm cultivates its organic “ingredients.”  The main ingredient is beneficial microorganisms.  Years of chemical use damaged the population of these tiny bacteria and relatives, but the farm was able to reintroduce them and achieve success in a short time.  That was documented by a microbiologist from the Javeriana University in Colombia.

Another specialized place is a room where freshly picked beans are washed, sorted, and fermented.  This is the famous step where usually enormous quantities, e g 37 gallons or 140 liters, of water are used to produce only one cup of coffee.  Here, they collect and use rainwater in much smaller quantities than the usual commercial practices.

We also went to the tostadora,a dedicated space for sorting and roasting beans.  It’s also where the final coffee product is brewed and tasted systematically for quality control.  Of course, I used the opportunity to get advice about my own coffee-brewing:  for example, the ideal temperature is not boiling!  It is much better to brew at 93.2°C (just under 200°F).

Tasters and experts frequent the farm, and often give high ratings to their beans and roasting techniques.  They only sell their coffee at a few places in Colombia.  It’s sold at the local Jesuit schools and in the local airport (Pasto, Colombia).

Two companies sell Villa Loyola coffee through direct trade.  PT’s Coffee is one retailer in the United States and this web page has some photos of the farm and a way to purchase roasted coffee beans (currently $18.00 per 12 oz. bag). Bird Rock Café also sells coffee beans from Villa Loyola in the US.  The beans have won major global awards.

In conclusion, I found Villa Loyola an inspiration.  It’s a Jesuit work, successful and well-known, promoting organic farming and sustainability.  The farm (finca) supports over 100 different species of birds, according to a recent expert survey.   They have even found ways to reduce greenhouse gas emissions from livestock. The workers there seem very happy. Not to mention, Villa Loyola is a relaxing place to stay for a few days!

Read more about Padre Joe and see some videos about the farm here.  Father Gregory Kennedy SJ wrote a different reflection upon his visit to Villa Loyola.  Also recommended is the Suyusama Foundation web page and an article in CPAL-Voces de Nariño which can be accessed here.