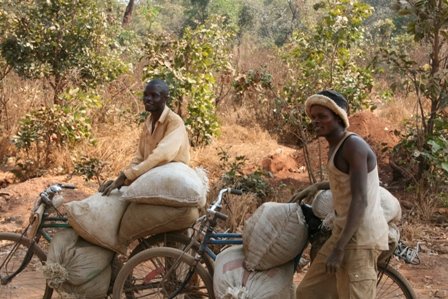 Many countries in the world that are rich in natural resources are poorly developed and politically unstable. This apparent paradox has been the basis for the development of the economic theory of resource curse.

Within the last 60 years, about 40% of internal conflicts have been fuelled by natural resources, and such conflicts are likely to intensify with the growth of world population and a steadily increasing demand for natural resources. In general, resources can affect conflicts on three different levels: at the origin of a conflict, to sustain one, and as a hindrance to peace.

The presence of natural resources can contribute to the outbreak of a conflict through attempts at misappropriation or by claiming an unfair share of their economic value. Once a conflict emerges, the profits from resource extraction can be used to finance armed groups, to sustain the conflict, or simply to be used as a strategic resource.

Natural resource extraction can also be an obstacle to peacemaking, particularly if dissident groups fear that an end of the conflict would end the income they generate from such exploitation.

All these situations have one element in common: the State’s inability and its weak government to resolve peacefully and fairly those tensions which derive from the presence of natural resources.

Under certain conditions however, natural resources can contribute positively towards the restoration and preservation of peace, e.g. by supporting economic recovery, by financing sustainable livelihoods and by promoting civil society dialogue. Well-managed resources indeed can trigger economic growth, generate employment, and in such a way both satisfy citizens’ needs and generate public funds.

In view of these ambivalent characteristics, the UNEP Expert Advisory Group on Environment, Conflict and Peacebuilding urges that the early warning capacity of the United Nations be strengthened in countries at risk of conflicts over natural resources.

According to the Advisory Group, it is also necessary to manage natural resources effectively, to promote economic recovery and to use all opportunities of environmental cooperation to foster peace building.

Natural resources can play an either positive or negative role in armed conflicts. In any case, it is necessary to strengthen State capacities for good resource management and to develop mechanisms for more transparency. A fair income distribution, integrated into a transparent development policy, a diversified economy, efficient anti-corruption programmes and institutional structures for monitoring the resources stream are key elements of an integrated approach.

It is encouraging that awareness on this subject is gradually increasing on the part of governments and regional and international institutions. The idea of a collective management of natural resources is slowly emerging and should help to prevent resource conflicts in the future – or at least to manage them effectively and facilitate a quick peace settlement.

For further reading, see the website of the Relational Peace Advocacy Network of the Jesuit European Office.