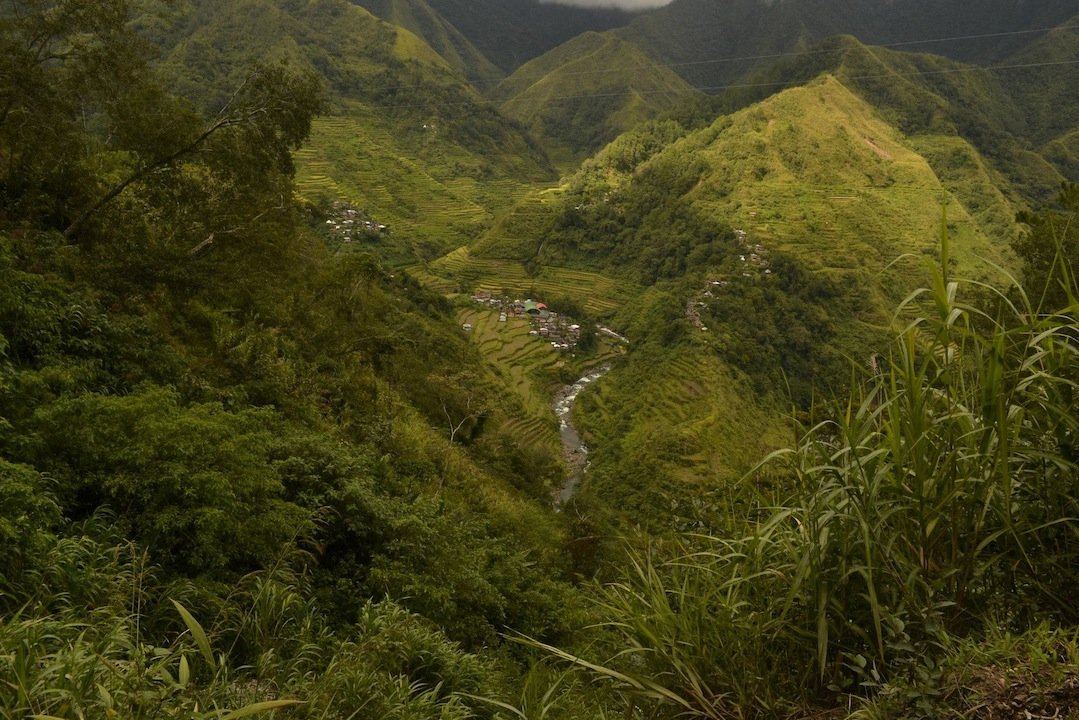 More than any of our lectures or readings in our course on Doing Contextual Theology in Dialogue with Indigenous Peoples with Father Jojo Fung, SJ, four people impressed upon me the challenges and the fruitfulness that await those who tread this path of learning, theologizing, and struggling to find the meaning of the New Evangelization of this age.

The lives of Junita, Edwin, Lourie, and Belmar are clear examples of modern-day masterings of the “middle ground,” of those constantly seeking the equilibrium amidst change, competing paradigms and cultures.  Through these people of the “middle ground,” I have come to understand that this word “dialogue” which we so often seek to do, is not spoken, but is lived.

Six pig skulls were tied together and hung over the entrance of the house that we called home for a day in Cambulo, a remote community in the town of Banaue, Ifugao province in northern Luzon, Philippines.  Our foster mother and father were both catechists and lectors in the Catholic mission center there.  It was therefore with some hesitation that that they told us why those skulls hung hauntingly over their home.

“Our ageing mother is very sick,” Junita said, with eyes downcast.  “And so two weeks ago we held a ritual.  It was for her healing…Please pray for her, too.”  Edwin, Junita’s husband, said, “Some say we should no longer do such rituals since we are already baptized.”  Later, I asked him about the mumbaki (shaman) and he told me, “There are bad mumbaki, but there are also good mumbaki.  The good ones do the rituals to help those in need, like the sick.”  Edwin also shared that his grandfather and father were mumbakis, but did not say if he would have been one if he wasn’t baptized.  He did confirm that he performed the ritual where they offered the six pigs.

Such practices of the mumbaki were looked down upon and called “witchcraft” by Catholic missionaries, past and present alike.  Quite understandably, I understood Junita and Edwin’s hesitation in telling their stories, and I quickly reassured them that I thought no such thing, and followed-through with promise of prayers for their ailing mother.

Some days later, a young Ibaloi (a cultural group in the Cordillera region in northern Luzon) woman, Lourie Victor, spoke to us in class about the challenges and hopes for Indigenous Community-Church relations in the Philippines.  She spoke convincingly, passionately, and with much hope for the younger generations of Church leaders and the Churched who are learning to be more sensitive to the needs and the spirit of her people.  But she also shed tears and bared the hurt when she spoke of the violation, misunderstanding, and exploitation of their culture.  “The generation of cultural practices…these are our very faith expressions, these are sacred acts.  That is why the ‘arena of pain’ for Indigenous Peoples is in the violation and loss of these practices.”

Lourie works with the Episcopal Commission on Indigenous Peoples of the Catholic Bishop’s Conference of the Philippines.  Through community education programs, she helps in the campaign to deconstruct historical misunderstandings of their Indigenous culture, to refine theologies toward a ‘theology of life’ and not a theology of dogma, and to re-work the missiologies of the Church in working with Indigenous communities.  She works mostly with indigenous communities, but takes every chance to address present and future Church leaders on these issues.  Deeply impressed by her presentation, I learned later that Lourie was one of the Ten Outstanding Young Men and Women of the Philippines in 1998 and also one of the Asian Young Leaders of Change recognized by the UN Development Programme in 2007.

Lourie spoke to our class made up of mostly seminarians, and recently engaged with the Association of Major Religious in the Philippines in a local conference.  She is a third generation Christian and regrets not being taught the language of her forefathers after they were baptized as Christians – a fate she wishes upon no other generation and a trend she works hard to reverse.

On our final day of meeting, we stood barefoot by the statue of St. Ignatius contemplating the Spirit by the River Cardoner, while examinations of the Loyola School of Theology were literally going on all around us.  Father Jojo Fung invited Mr Belmar Yano, a Kankana-ey (another cultural group in the Cordillera) elder, to perform a ritual of cleansing for the class.

Manong (a term used as a sign of respect for male elders) Belmar wore his ritual garb (a vest and a band he placed around his head, both of native weave) and began to chant in his native tongue.  Clean water was poured into a large bowl, and then Manong Belmar injected loud noises into his prayer, like the cooing of birds.  A moment of silence followed, after which prayers were offered by four pre-selected members of the group.  As instructed prior to the ritual, the first addressed the forefathers of the household, the second the founders of the Church and of the various Congregations present, the next addressed the spirits of nature, and the last a prayer to Kabunyan (the Creator, all powerful and supreme God).  After prayers were offered, each of us dipped our hands in the bowl of water, and wiped our forehead, feet and knees with the water.  As we stood in silence underneath the noontime sun, the water felt good, cold, cleansing.

When we first met him in class, Manong Belmar surprised us with statements like “Maybe we are taught or emphasize too much Christology, such that we have forgotten the Spirit that hovered over the waters at the time of creation” and “How come those among my cousins who were baptized as Christians are now the corrupt politicians of the province, those who exploit the forest and the land?  On the other hand, my cousins who have remained closer to their indigenous spiritualities are the ones who continue to see the land, the forest and the people as sacred?”  Before us was one who looked, acted and prayed like a shaman, but thought and spoke like a respectable cleric.

Manong Belmar knew deeply of problems of the Church: both those that we face and those that we inflict upon others, like the Indigenous Peoples.  At age 14, he was “plucked out of his village and put in the seminary.”  After years of seminary formation, he was “thrown back into his village.”  Although he was never ordained a Catholic priest, he is now considered an elder of his community where he lives with the larger Kankanaey and Cordillera indigenous communities, for which now he seeks greater respect and appreciation from the side of the Church.  He believes that the most promising platforms of dialogue between Church and Indigenous Peoples today are in the communitarian sense of the religious which is deeply shared by indigenous cultures, as well as the revisiting and deepening of the theology of creation and the theology of the land.

People of the middle ground

In a book by Ronald Edgerton about central Mindanao, he writes of many places like Bukidnon that became masters of this art of carving out this middle ground over the last century, with education as the primary tool.  “They came to reinvent themselves not as one or the other, but as a little of both.  And over time they developed a capacity to envision themselves not as warriors of right versus wrong, but as negotiators between worlds, skilled at including both in a new, more accommodating world view.” (Ronald K. Edgerton, People of the Middle Ground: A Century of Conflict and Accommodation in Central Mindanao, 1880s-1980s)

He later points out, however that “the Bukidnon experience of struggling to negotiate their shifting middle ground is nothing less than the Filipino experience writ small.”  Interestingly, Edgerton concludes by emphasizing not only the tragedy and struggle that accompanies this history of “borderland inclusions” but more so the depth and extraordinary richness in meaning that springs from this middle ground.

It is not surprising therefore that we continue to find models in the present day of this mastery of negotiating between worlds and cultures.  Belmar, Lourie, Edwin and Junita have clearly retained aspects of their culture and spiritual heritage as Indigenous Peoples, while managing to accommodate the Christian faith served to (or thrust upon) them and their ancestors.  They are the people whose lives embody the dialogue of identities, the dialogue of survival and adaptation.  And they are the people who can speak most credibly of and to these worlds.  Their double-belongingness is of invaluable contribution and insight to the process of dialogue.  And out of their experiences we can draw a wealth of wisdom – that is, if we are willing to listen.

On our journey home from Cambulo, I sat top-load on a jeepney beside young high school girls and listened as they told stories to one another.  They had come home to Cambulo for the weekend and were on their way back to Banawe where they study.

I wondered whether there would come a day when they would no longer be making such a return trip to Cambulo?  Will Edwin’s children still know how to perform the healing rituals that will heal their ailing elders?  Will the power of electricity (only a month old in this remote village, thanks to the electrification program of the national government) change their life irreversibly, for better or for worse?

And are we doing enough to give Indigenous Peoples the education, the rootedness, and the recognition to ensure that they continue to be the resilient people of the middle ground?

But as the jeep we were riding negotiated the boulder-ridden roads of the mountainside, sinking deep and entrapping us in the impassibility of mud at one moment, and taking us by the edge of steep ravines in the next, always threatening to throw us passengers off from the top-load of the vehicle by the sheer surprise and strength of every bump, tip and turn, I came to realize that we (people of the Catholic Church) are in no less a precarious situation as our indigenous brethren.

If we continue to do poorly in negotiating and traversing worlds and paradigms like environmental resource exploitation on one hand and sustainable consumption on the other, if we lose belief systems rooted in traditional philosophies and the dialogue of life, poverty, and spirit, and if we cannot distinguish what truly matters for people today, we surely also risk our own peril.

Mark Lopez, SJ is a Jesuit scholastic currently doing his studies in theology in the Philippine Province.  He is also the President of the Scholastics and Brothers in Formation Circle, a group of Jesuits in formation in Asia Pacific who will be meeting in Siem Reap, Cambodia next month with ecology as a theme.  Mark can be reached through his email mark.lopez.sj(at)gmail.com.