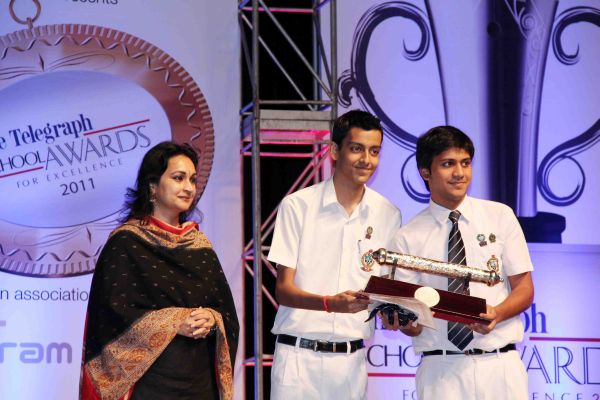 St. Xavier’s Collegiate School, though situated in a cosmopolitan city like Kolkata, continues to learn from the bounties of nature.  The word of Yahweh after the creation of human beings was to “till and take care” (Gen 2:15).

The student action group, Nature Club, took the initiative to do organic gardening with a special emphasis on compost manure preparation.  This paved the way for an academic-industrial interface with ITC sponsoring the whole program on organic gardening.  The school stood first to be awarded by the same corporate sector that evaluated various other schools within the city.  The school won laurels from ITC for developing the best organic garden with the student’s initiatives.  Later, St. Xavier’s was judged and awarded the best eco-initiative school in Kolkata City.

The Nature Club teachers, of which I was also part, guided the club members throughout the program that started in June after planning activities.

Organic gardening is a form of cultivation that relies on crop rotation, green manure, compost, and biological pest control to maintain soil fertility and productivity.  Our school applied this type of gardening in a small garden near the St Xavier’s Park Street Hostel by using the organic waste collected from the complex to make compost pits and produce green manure to grow seasonal vegetables like spinach, radish, coriander, tomato and some seasonal flowers.

The students of Class 11, who are the members of the club, dug six pits in the garden, each four feet in length and breadth and two feet deep.  The school provided the shovels, spades, and other digging equipment. The members worked tirelessly for three days and in two groups to speed up the digging.  The mud that was taken out was used to cover the layers of the pits and for the farming plots.

The pits were filled with highly biodegradable materials like vegetable peels, tea leaves, and eggshells collected from the school canteens.  The Class 9 members of the club brought the dustbins and helped in filling up the pit.  The pits were filled systematically by applying a layer of soil at certain intervals and also using cow dung to enhance the degradation process.  On top of the cow dung, a layer of hay and straw was put.  Then a thin layer of soil was applied and water was sprinkled to moisten the waste.  One pit was selected only for the leaves, as it was more than four feet deep.  These leaves were mostly collected from the garden.

The pits were filled and covered with a thick layer of mud to prevent insects and crows from destroying them and a layer of cow dung was then applied.  The compost will be ready after two to three months after which it will be used as manure for the vegetables and flowers that will be grown.

A five feet wide farming plot was also prepared, which extended throughout the garden.  The top layer of grass was carefully taken out and kept aside to be put back later in the pits.  The top layer was dug to provide for the plants to be grown.  Two compost pits that received sunlight throughout the day were also selected for growing plants after the pits were filled up.

The role of organic gardening, whether in cultivation, processing, distribution, or consumption, is to sustain and enhance the health of the ecosystem and organisms.  Organic gardening combines tradition, innovation and science to benefit the shared environment and promote fair relationships and a good quality of life.  St. Xavier’s Collegiate School has clearly shown the path to future programs involving small-scale organic gardening in the city.

Dr Xavier Savarimuthu, SJ is a member of the province of Kolkata and heads the Department of Environment Studies at St Xavier’s College, Kolkata where he is also a professor of microbiology.  He obtained his BSc in Zoology in 1994, MSc in Environmental Science in 2000, and PhD in epidemiological research in 2005. He is also the director of St. Xavier’s Park Street Hostel.  For more information, please contact him at sxavi2005 (at) gmail.com.