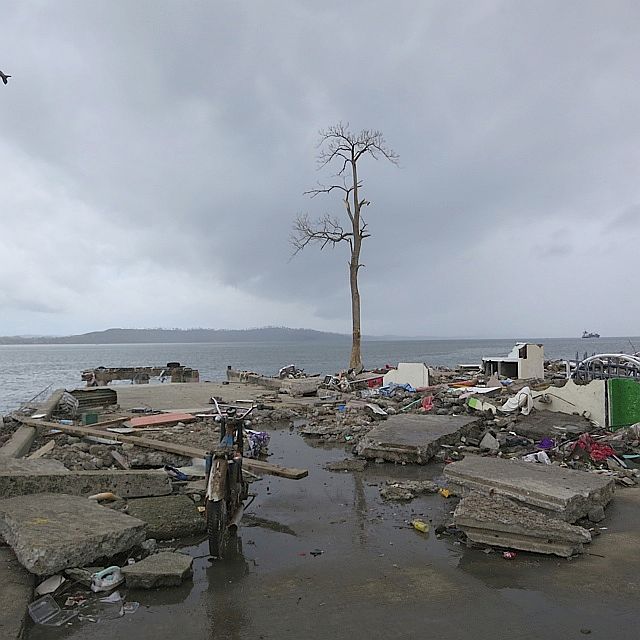 The Tacloban coastline is a sea of flotsam: jumbled wood of various sizes, plywood, foam, refrigerator doors, boxes, cabinet frames, chair backs, bench tops. You can walk for hours watching your step and people as they move around on this trail of debris. By the shore, sometimes there are two-meter coconut root balls like cart wheels with broken axles, sometimes tiled floors and flattened cement walls, patches of sand all generally swept clean but for fragments of plastic. Moving inland, a knitted mass of planks and plywood rise to form four meters high or more of a wave of debris about 30 to 100 meters from the shore as it banks up against concrete houses. Like a wave frozen, this pyre is now the source of wood for reconstruction and of bodies yet to be collected.

People are already reconstructing their 2×3-meter accommodation exactly where it was before being totally swept away. Encouraged to leave the evacuation centres or driven tenaciously to form a life, they build as if the sea was not there, heads down as they hammer, and right where bodies remain uncollected from the neighbouring cement walkway.

Confusion, contradiction, pain, blur, denial, hope, defiance – all exist in the minds and bodies of so many. The loss of family, the sight and smell of bodies strewn like plastic sacks, are deeply painful and numbing. That there is nobody to be with these bodies and bury them with dignity perhaps is the greatest assault on the senses of being human. The associated health problems are a great risk and the struggle of getting basic water and food, shelter, and clean clothing takes all the energy. It is dehumanizing not to tend to the dead, so many are buried lightly along the shore.

Yet the calm, even cheerful greetings of “hapun (afternoon),” “hi,” “thank you,” “kaun (eat)” are shared. Children play, people wash clothes, somebody is out for water, rice, or viand. A youth wearing an air mask moves over the debris of where his house was in the hopes of finding family; silence, numbness, persistence perhaps, but peace is not easily found.

Consolation is hard to talk of, but much hope and heroism are rooted in this. One can feel it amongst many; while the worst of the typhoon is over, the impact is not. Many may not be consoled in the loss of life amongst family and neighbours, many remain deeply shaken having lost all security and only the minimal of life threads returning to move through the day and night.

On the television, some people are saying things have returned to normal; what is “normal” is people can function and have a set of things to do, a set of functions and minimal relations that allow for a pattern to arise. But there is nothing normal for the next three months, two years, five years – or never for some. Crops have to be grown, water systems rehabilitated, electricity pylons and generators erected, schools opened, businesses assessed and work found; support is needed.

People are gathering for many activities of service during the day and addressing immediate family needs, but in the late afternoon they gather and sit on the wood piles or benches – some silent, some talking about the day. There is a simple pattern emerging and people know a little of what they can do in the coming morning. Those who are serving and organizing from all walks and places of life are needed and they themselves are grateful to be there.

The people in the makeshift prison were making little colourful parol (Christmas lanterns) and hanging them on the fence. The men and women did not know how much to sell them for; it was like any other village corner with smiles but for the barbed wire fence. There is consolation in seeing the people work for themselves putting back a half roof, of people bagging rice and distribution, children gathering water, planks by the market place with clusters of sibuyas (onions) and bawang (garlic), so a sense of taste returns. All of this seems a blessing otherwise ignored; every kind act is met with expression and hope.

Yes, we can all sit around and complain about government, about anything or everything – but actually little of that helps now. Water and food is getting out in most areas, medicines are available, yes, and there is suffering and shortage and extending efforts to reduce this. Perhaps there is a lack of foresight in strategy most of all. The ability to reckon with the worst before it happens and acting on it is going to be the new paradigm pushed further again by this event. There will be a time for review and strategy for ground zero at 350 km/h, but that’s not for now.

2 thoughts on “Peace is not easily found: Tacloban a week after typhoon Yolanda”