In an effort to keep moving water-related Sustainable Development Goals (SDGs), the UN launched in February 2015 a report outlining what must be done within the world’s water system. Water in the world we want, a publication by the UN University-Institute for Water, Environment and Health, warns that without major new investments related to water, many societies around the world will soon face growing desperation and conflicts over the most essential resource for life.

The report comes in the run-up to the UN Summit to adopt the post-2015 development agenda in New York, USA this September, when the Millennium Development Goals are reviewed and stronger international action is sought.

“People do not have the luxury of living without water and when faced with a life or death decision, people tend to do whatever they must to survive,” the report said. “In this manner, changes in fundamental hydrology are likely to cause new kinds of conflict, and it can be expected that both water scarcity and flooding will become major transboundary water issues.”

The report notes that one of the biggest problems is the rampant corruption in developing aquifer and health infrastructure, reaching a magnitude of 30% of the funding to develop water resources is diverted to other purposes. The report highlights the need for clearly defined protocols and enforcement of severe penalties against corruption. “Corruption at any level is not just a criminal act in its own right. In the context of sustainable development it could be viewed as a crime against all of humanity”, the report added.

The authors indicate that worldwide waste of resources due to corruption and lack of public resources by the subsidies granted to the energy sector are now matched by alterations in the hydrologic cycle as a result of climate change.

Due to these factors, Robert Sandford and co-lead author Corinne J. Schuster-Wallace underline that all current water management challenges will be compounded by climate change and by increasingly unpredictable weather. 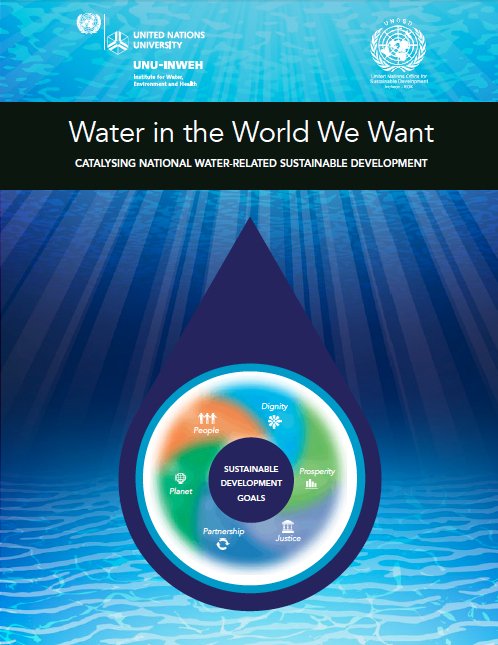 The study maintains that past and projected climate change means that we can no longer rely on predictable weather patterns. “This historical predictability, known as relative hydrological stationarity … provides the certainty that is needed to build houses to withstand winds of a certain speed, snow of a certain weight, and rainfalls of certain intensity and duration, when to plant crops, and to what size to build storm sewers. The consequence is that the management of water in all its forms in the future will involve a great deal more uncertainty than it has in the past.”

This loss of hydro-climatic stationarity is what the authors qualify as “playing poker with a deck in which new cards you have never seen before keep appearing more and more often, ultimately disrupting your hand to such an extent that the game no longer has coherence or meaning.”

Moreover, changes in atmospheric composition and consequent changes in the hydro-climatic change, and water quality trading, have a direct impact through water pollution allowances.

“Improved data collection and management systems are required that ensure availability of accurate, verifiable qualitative and quantitative data, when needed, to all bone fide partners at a level of detail required to be useful and used to inform water policy and practice. The improved data systems that are needed to achieve broader sustainability are now available.”

According to the report, there is need for incubation hubs that can innovate and modify proof of concept responses so that they can be transferred into different contexts. More importantly, post-2015 SDGs must be set up for success and not failure.

The study recommends that governments and all economic sectors “eradicate corruption through the establishment and implementation of clear and defined anti-corruption protocols, with meaningful consequences when the protocols are breached.” The report also encourages national governments, multinational corporations, and international institutions to work together to that they can identify and implement strategies to equitably free up available existing resources.

The report was released days before World Water Day 2015 last 22 March. On the occasion of this celebration, Pope Francis, who intends to issue soon an Ecology Encyclical, urged the world to protect water and make it accessible to everyone.