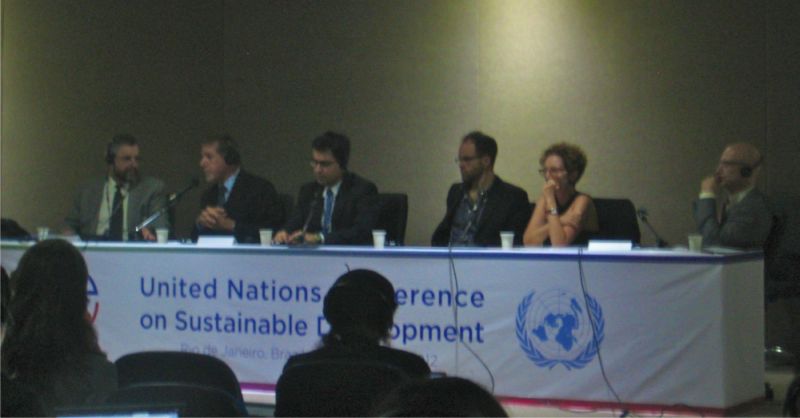 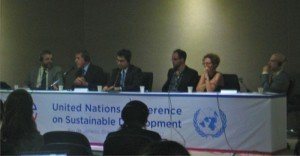 Though the outcome of higher-level negotiations may be a gray area at this point, there is no doubt to the quality of engagement in the side events.  Nobody should leave Rio without having learned something valuable; it is a vast learning platform.  The Ford Foundation just concluded a valuable session on the “Sustainable and Just City.”  The link gives the main speakers and I draw from them in this account without being able to quote them accurately or in person, as the dialogue was fast and questions diverse.

The problem identified is that growth is not accompanied by education, and migrants moving to the cities of the world today need access to opportunity and infrastructure.  The self-building dynamics of the poor needs to be acknowledged as their ability, and that governments need to bring infrastructure into this context and unleash the settlements’ engagement and creativity in city life.

Formal society needs to acknowledge that these people rightfully exist in our cities, acknowledge that they hold de facto – and that this is enough – the land where they build as theirs, and then acknowledge and assist them in their investment in livelihood and security.  Hearing a panel of government and agency officials discuss this would be shocking for real estate developers, who through the legal systems of today’s absentee landlords and government evictions in support of development, leave no place of any worth or security for the poor.

Half the world now lives in cities and the poor continue to fuel the migration.  Urbanization reduced exclusion and poverty, yet the contrast with the wealth of some in the cities highlights further unacceptability.  In rural areas, the exclusion and marginalization still remain greatly hidden.

Since Rio 92 few are trying to stop urban migration and orientations changed, as squatter areas are no longer viewed as simply shelter, but shelter and commerce; the right to house, livelihood, and security is needed.

Social housing in many cases created housing without livelihood at the city margins, and though slums may be removed, there is no opportunity.  Social housing in Santiago, Chile was given as an example where social housing was not successful in sustaining livelihoods.  There is value, also economic value, in the movement of poor people to the city and services need to be extended to meet the needs and opportunities of these people.  In a related discussion, it was found debatable as to whether cities that hosted the Olympics actually gain greater social development by the better incorporation of the poor through the infrastructural and planning advances made.

The panel returned several times to the discussion of the “Principles of a Just City,” which were initially identified as three:

“The first principle is density.  An abundance of research now tells us that density boosts creativity, entrepreneurial energy, and jobs.  At the same time, density is key to mitigating climate change, ensuring that residents are close to where they live and work.

“The second principle is diversity.  Cities that are inclusive, and actively welcome diversity, experience not just faster but also smarter growth.

“The third principle is sound land use planning and regularization.  Sustainable cities must be well-planned – designed for efficient land use and energy use, and able to maximize economic opportunities for all residents.  Similarly, giving residents ownership of land and standing at the municipal and provincial levels unleashes creative energy and growth, while also unleashing a more profound commitment by urban residents to the sustainability of their communities.  Granting residency rights empowers residents and gives them a stake in the sustainable development of their own cities.  It makes them a force for change that is much more powerful than anything that can be designed on their behalf from the outside.”

George McCarthy, Director of the Metropolitan Opportunity work of the Ford Foundation, was not to be forgotten for his insights and fair time management opening the discussion to the floor.  Luis Ubiñas, President of the Ford Foundation, reiterated his commitment to reduced cars and improved public transport as a basic goal for cities, a no-brainer as he indicated.

I expressed the reality in the Philippines and much of Asia of increasing disasters, loss of life and livelihood, and the security of homes.  Is not climate change and adaptation a major part of city design today?  Is this not a major principle to be included?  People responded with “regenerative design” of the ecology and recognition of continuous habitats through a city, with river rehabilitation as essential in responding to potential disasters.

The Brazilian program of “My house, My life” was mentioned by Jorge Bittar, Municipal Secretary of Housing, Rio de Janeiro City.  Panel members debated as to the program’s level of success.  Raquel Rolnik, UN Special Rapporteur on adequate housing, stressed that “the problems are that the private sector defines the area of localization of the poor and that is the area of lowest value and highest risk.”  Jeb Brugmann, founder of the International Council for Local Environmental Initiatives (ICLEI)-Local Governments for Sustainability, acknowledged the risks and that the program did not work out as conceived.

Inequality breeds instability and there is grave conflict over the location of different interests.  One of the panelists said: “competing interests need to be compatible.”  Well said, but how this is done remains a challenge and who will stand up for the poor and how they will be heard effectively?

Principles found as important included design planning and engineering and ethnography, according to Dr Xavier de Souza Briggs, Associate Professor of Sociology and Urban Planning, Massachusetts Institute of Technology.  The heterogeneity of cultures must be incorporated in a city’s vision – wonderful – the challenge is to being this to earth.  A city based on the commons and communality not privatization was primary for Raquel Rolnik, and Dr Briggs added public goods and services, the ability to learn and to compete in the market is a needed reality.

Climate adaptation is a double negative for the poor; resilience needs to be redesigned with food, water and energy to a localized level and management – what a hope, what a challenge.