Ecojesuit shares a brief interview of José Eizaguirre abou his recent book Todo confluye: Espíritu y espiritualidad en los movimientos altermundistas (Everything comes together: Spirit and spirituality in alternative lifestyles).  He spoke with Paula Sendín about his thoughts on people’s search for simpler lifestyles, seeking the inner connectivity, and integration with nature through a return to a lifestyle that provides this closeness with nature.

Ecojesuit: What is your understanding of this movement back to rural life and this need for inner connectedness, with oneself and with others?

José: I would say that it is a manifestation of the need for connectivity.  After decades of rural exodus towards the cities, we are seeing now that many people make the journey to the opposite direction.  We can see this return to rural life as a search for integration with nature, with others, and with oneself.  And I see here an undeniable feature of spirituality.  The word “monk” comes from the Greek word “monacos” which in turn comes from “mono” which means “one.”  The monk, the nun, is someone who has had the experience of integrating all the dimensions of the person and, at the same time, makes the experience of being integrated with other creatures by forming a unit.

Today we find this same search by people who make up this movement of going back, not necessarily to rural life alone, but I would say to a more natural way of living.  In the cities, there are more and more people who care about a healthy life, a balanced rhythm of life, healthy eating, a culture of manual and creative hobbies, to be in contact with the land, for example, by farming terraces and urban gardens on rooftops.

Ecojesuit: You specifically mention urban gardeners in the book, are they more about consciousness or the need to get closer to nature?

José: There is a conglomerate of motivations that we can find in all this.  In the book, I mention the testimony of Josep Maria, who grows vegetables at his apartment’s terrace in a central district of Barcelona: “the least, he says, are the four tomatoes harvested at the end of the season; I do it to get my hands dirty in the mud.”  Similarly, many other urban-based people come close to these gardens to get their hands dirty, to dig, to fertilize, to water …  and these are responding to a need for those living in the cities.  As Pope Francis notes, “we were not meant to be covered by cement, asphalt, glass and metal, and deprived of physical contact with nature.” (Laudato si’ 44)  Physical contact with the land is a characteristic of our human being.

Apart from this motivation, we also realize that these attitudes and practices are contributing to a better world and the support by urban gardeners plays an important role.  We do share dreams and concerns, new ideas, and perspectives.  We become more aware of how we live and how we want to live.  “The alternative to neoliberalism is called consciousness,” said José Saramago, and to be conscious is also a matter of spirituality.  In the Eastern traditions, it is said that one who has reached the summit in the spiritual life has reached “enlightenment.”  A “light” is much more than mere knowledge, it is about realizing and being aware.

Ecojesuit: Does the strengthening of the relationship among people and nature break down the globalization of the “indifference” that Pope Francis talks about?

José: Definitely.  When you feel yourself part of something that connects everything and everyone, then you cannot remain indifferent towards those to whom you feel connected.  This is not a moral principle that impels us to “not do to others what we do not want them to do to us,” but this comes from the experience that anything we do to others, we are also doing to ourselves because we are a family!  And here is where compassion comes in, a word that has a much more beautiful meaning beyond its religious resonances.  We suffer with those who suffer because we are close (neighbors).  We feel close, united, and connected to them.

We can also say the same about nature.  The care for the nature doesn’t come from a moral imperative or from a rational exercise of common sense when reflecting on climate change, for example.  Because what we do is inflicted on nature, we therefore inflict to ourselves as well!  In this way, we do integrate cleaner and less harmful behaviors, not because of ideology but because of sensitivity: because the damage we are causing through our lifestyle hurts us both in the soul and in the body!  It is not a question of ideology but of heart.

Ecojesuit: Does the “return to rural life” promote human relationships that were disrupted, ironically, in this age of mass communication?

José: Today we live in an era of “over-information.”  We are constantly bombarded by all kind of messages.  Social networks and mobile devices, with all the advantages that they provide, keep us lost in a tangle of superficial relationships.  We receive many more messages but I could not dare to say if we do communicate more, or even more deeply.

A balanced lifestyle allocates time to work and time to rest, time to do physical exercise and to develop artistic creativity, time for contemplation and to promote solidarity; certainly it allows us to develop human relations of higher quality.  I know people who, after being used to using smartphones and other gadgets, have gone back to devices not connected to Internet.  It’s amazing that there is this lucidity to recognize what technology offers to us and also its limitations, and the courage to move in the direction of a greater humanization.

Again, it is not only the “new rural lifestyle” but rather the “neo-natural,” to return with a new conscience, to lifestyles more “natural,” and also to human relations.

Ecojesuit: Where does religion fit in this new era? Is there any way to bring religion into this new context?

José: If you remember the image, religions are the fingers pointing to the moon; the wise person looks to the moon but the foolish keep looking at the fingers.  Religions are immensely worthy; they are rich sources of spiritual knowledge transmitted by millions of believers through several thousands of years.  But millions of fingers pointing to the moon is not the moon.  It is necessary that the value of religions is acknowledged but we must also recognize that they are mediators.  Therefore, it is as counterproductive to reject religions as to give them an absolute value.

Because of this, we need people to build bridges from both banks: from one side we need believers deep rooted in their faith and capable to identify their relative roles.  At the other bank, we need people who, living a spirituality outside from religions, are able to appreciate what is good in the religious traditions.  In doing so, we will build bridges not only between religion and groups of “alter-globalization” (those who proclaim that “another world is possible”) but also between different religions, once it is realized that they have the nature of mediators in common.

Moreover, for Christians, this approach can bring us to the surprising discovery that the Holy Spirit is present and acting even outside the boundaries of our Church.  My book concludes with a quote from Pablo d’Ors in which he recalls that the role of the witness is not so much to preach, but to be a living testimony of what was experienced.  Christ’s witness should be a person who is able to recognize, and to report, the presence of the Holy Spirit in the midst of the realities of this world.  The Spirit is here, and there! 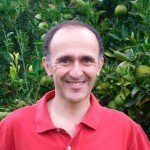 José Eizaguirre is from Spain and is the author of articles, lectures, and courses on ecology, consumption, and alternative lifestyles.  He published Una vida sobria, honrada y religiosa (A frugal, honest and religious life) and is the promoter of the Lenten campaign of solidarity Forty days with the Last Forty.  Started in 2005, this campaign dedicates each day of Lent to one of the 40 least developed countries according to the UNDP’s Human Development Index.  José studied architecture in Madrid and business administration in Mondragon and worked as an editor and as a provincial administrator of the Society of Mary (Marianists).  He currently works with the Asociación Biotropía (Biotropía Project), an initiative to accompany lifestyle changes by providing tools and contacting people to support each other.