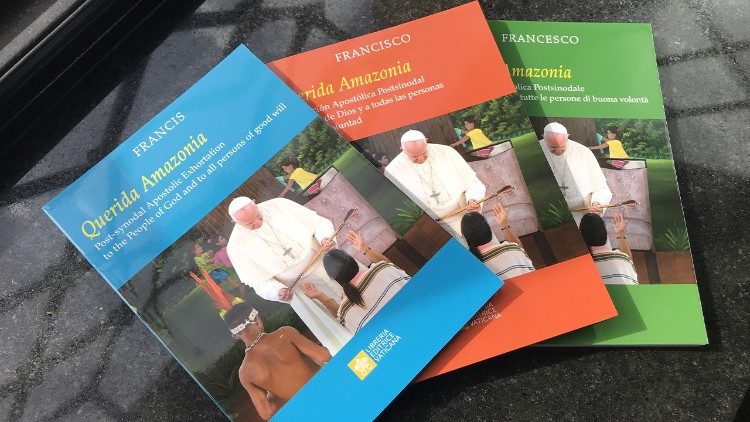 A transcription of a Vatican Media interview of Cardinal Michael Czerny

Querida Amazonía, or beloved Amazon, the Post-Synodal Apostolic Exhortation by Pope Francis was given on 2 February 2020, after the Synod on the Amazon and the release of the Final Document, The Amazon: New Paths for the Church and for an Integral Ecology in October 2019.

In a brief video by Vatican News, Cardinal Michael Czerny, Special Secretary of the Synod for the Amazon, explains the key elements, the heart of the matter, of Pope Francis’ exhortation:

Following is Ecojesuit’s transcription of the interview (headings are by Ecojesuit):

Importance of the Amazon and interconnectedness globally

We recognize the importance of the Amazon when we realize how interconnected our world is, that in fact our world is interconnected like our human body. And Saint Paul himself taught us that when one member of the body suffers, the whole body suffers. Well, we are living this practically daily all over the world. And one part of the world that is suffering and is in great risk is the Amazon. So when we call the Amazon at the heart of the health of the planet, that’s not just a figure of speech, that’s very true. It’s very true with regard to water and to the stability of the climate and many other factors. So that’s why this concern is essential for us all and no just for the people in the Amazon.

Response to the needs for the Eucharist and the Sacraments

The question of the Eucharist in the Amazon community was widely debated in the Synod and also outside of the Synod and it became a focus of real interest. And in His response in the Exhortation, the Holy Father calls for a wide range of responses.

He looks to the Bishops for example to send more missionaries. He would like every diocese to have a good proportion of their priests spending at least some time in the Amazon. He also looks at the formation of deacons, better and greater formation of deacons. Also, He would like us to form at least one seminary where native candidates, indigenous candidates, can develop their vocation to the priesthood in an inculturated way.

And so within this range of possibilities, there will be many ways of responding to the needs for the Eucharist and the Sacraments throughout the Amazon. And this will be an important revitalization of the whole Church life in the region.

Recognition of the great and essential role of women

The place of women in the Exhortation is striking because, as in the Final Document, here in the Exhortation, Pope Francis begins by recognizing the great and essential role that women have played for years, for decades, even for centuries in maintaining the faith and in passing on the faith within the Amazon.

So it is not saying something…it is not as if this is something completely new. On the contrary, their role has been essential and their role should expand and should develop in many different ways. And I think the push that the Holy Father makes in the Synod, in the Exhortation, is to develop creatively new possibilities, not to focus just on ministerial priesthood.

For example, the proposal to develop a ministry for the care of the common home would be a wonderful opportunity for both men and women to exercise their ministry, to exercise care for the community, and accompany the community in an official way, in a recognized way that this is going to expand, deepen, and improve the role of women and the contribution of women to the Church.

This interview is part of the article Cardinal Czerny: Love the Amazon and its people to save the planet, an interview by Alessandro de Carolis and Francesco Valianteof the Vatican Media.

One thought on “Querida Amazonía, the heart of the matter”