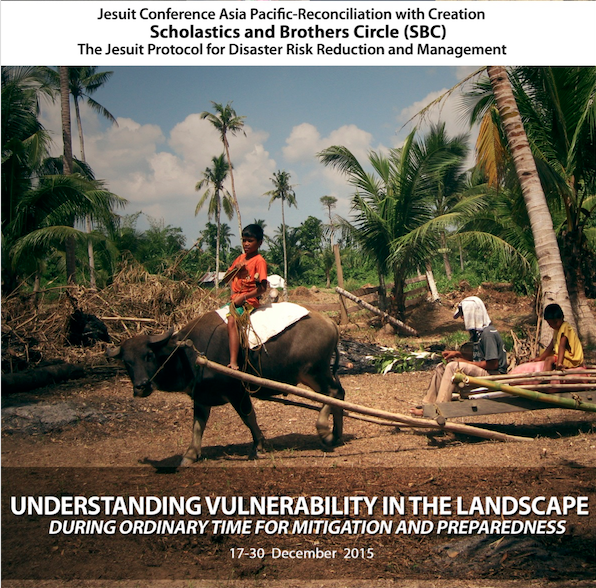 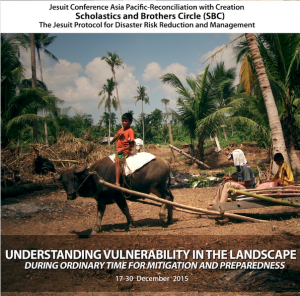 The Scholastics and Brothers Circle (SBC) of Jesuit Conference Asia Pacific (JCAP) selected disaster risk reduction and management (DRRM) as their annual workshop theme for 2015 and for 12 days in December, they gathered in Tacloban in Leyte, Philippines engaging directly with communities, local governments and Church groups and learned how people are recovering and actively participating in the reconstruction and rehabilitation.

The JCAP-DRRM protocol was also a focus and helped develop the framework for post-disaster response. Protocol is about learning how to act as one in the broader Jesuit network and make decisions that connect all and coordinate action for more coherent in the broader movement for action.

Through this gathering under the JCAP Reconciliation with Creation work, scholastics obtained a more grounded context and experience of DRRM for greater social preparedness and integration in the Asia Pacific region, considered one of the most globally vulnerable to the impact of a changing climate. Daily reflections on Laudato si’ enabled seeing disaster response as part of an integral ecology that cares for the planet and accompanies those most vulnerable at the margins of society. It was also an occasion for reviewing the preparations for GC 36 and the Call of the Eternal King.

The experience in Leyte was a focus and where communities suffered most from typhoon Haiyan in November 2013, particularly from storm surge, high winds, and flooding. In small groups, disaster risk reduction was discussed in the contexts of drought, fire, volcanic eruption, earthquake, and nuclear meltdown, opening up the broader range of disasters to which communities may be exposed.

Floods from extreme events may dominate the Asia Pacific region, yet there are droughts and new areas of flooding that are very important to track for those living in the region, as in Cambodia and Vietnam. The scholastics shared and discussed the impacts of disasters on the socio-cultural context and ecological services and how these are set to grow in 20 years of increasing climate change. There were also discussions on the aging nuclear power plants, another form of disaster in Korea and Japan. Tsunamis affected several areas, as well as volcanoes, earthquakes, landslides, and sea level rise – but with faith, it was realised that people are not overtaken.

It was learned that the problem is deeper than the disaster given the sustained social vulnerability of so many people in Asia Pacific. Faith is the primary source of healing, connecting the spirit of trust in God and hope of community. In seeing how hope works, the scholastics gained hope and energy in wanting to take meaningful action. Many scholastics have heard about such disasters but did not expect to find hope in people! They now say they experienced Church in a different way, one which is life-giving in a new and humble presence as people searching with hope and caring for all. The problems remain yet they have hope in working together.

Christmas was celebrated together with the local community in great joy. Yet the feast of Saint Stephen and of the Holy Innocents gave a further deep experience of faith. How is it that there seems to be small sadness felt for martyrs as they reveal something of the mystery of life? The scholastics saw another side to a typhoon they did not expect. Where there was this unnecessary great loss of life, they also experienced a mystery. They listened to the local community, widows, youth, and the old, talk of the blessings and experience of community life that they had never known before, and the scholastics realized the power of struggle and lived faith!

Very valuable insights were shared from every country presentation without exception: China, Indonesia, Japan, Korea, Myanmar, Philippines, Thailand, Timor Leste, Vietnam. Everyone shared what little they had, but with great energy and desire to engage. Jesuit institutions and commissions were seen as key bases for awareness and response, how every little effort at being prepared makes the difference. Coordination with others at the local and national levels is important, but coordination and the decision making process within the Society were understood as essential.

There are many who know much more about disaster management, but as citizens in individual countries, it is good that everybody was aware and prepared to help neighbouring countries. In the basic experiences of Leyte, the importance of professional engagement was seen, but most of all the need for preparedness and ability to simply accompany those who suffer. In listening to those who suffered, a deeper faith was experienced and how such faith breathes hope was understood.