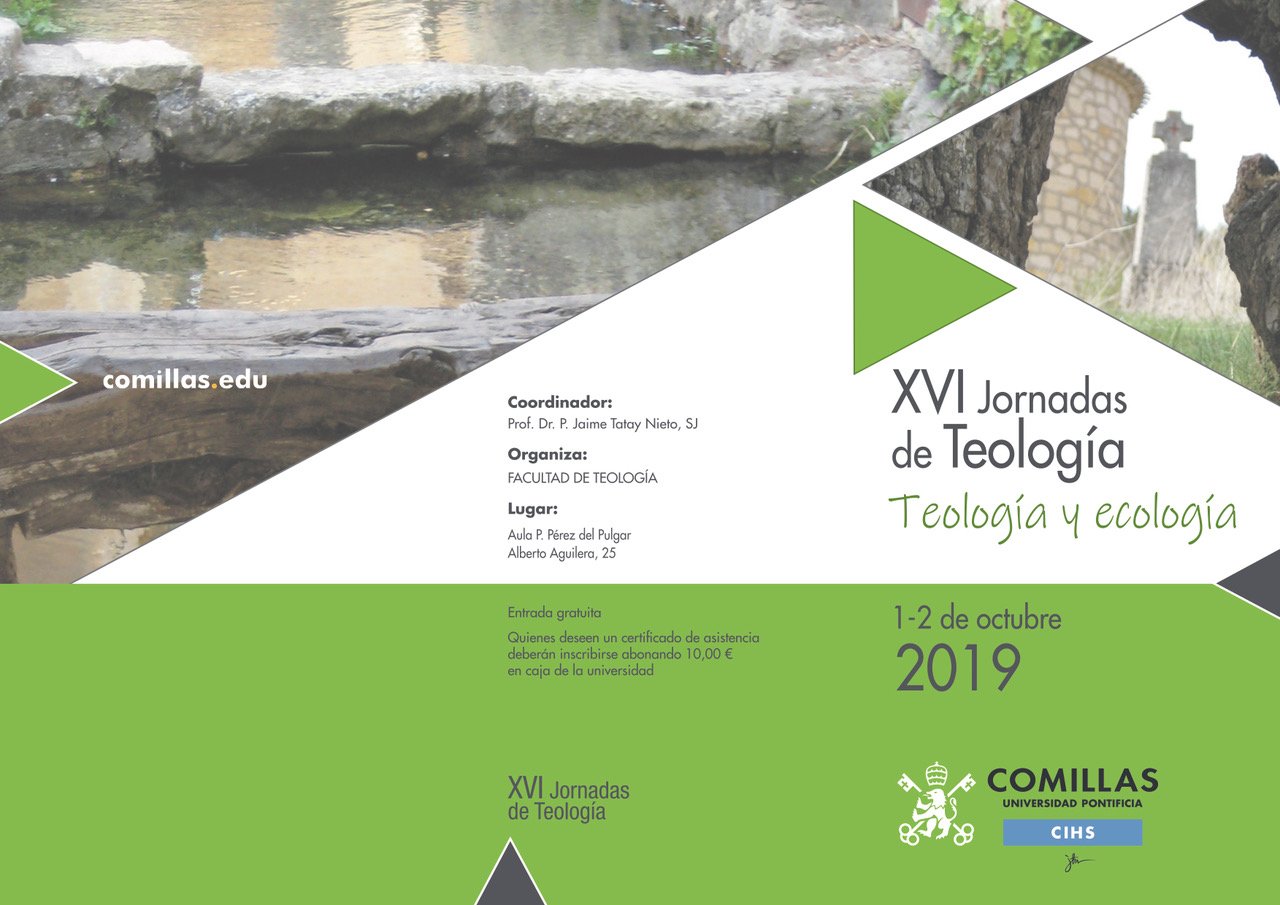 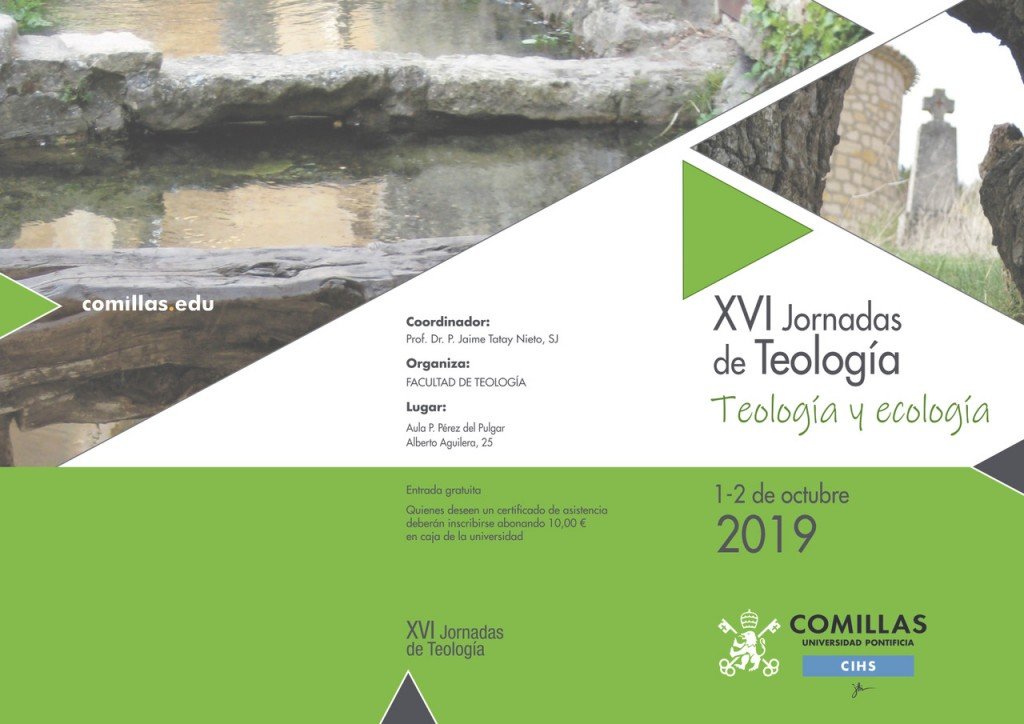 The XVI Comillas Theology Conference held at Universidad Pontificia Comillas in Madrid, Spain in October 2019 had a special relevance when dealing with the theme of ecology given the historical moment in which we find ourselves.

Three milestones define that moment. A week before, the president of Brazil, Jair Messias Bolsonaro, spoke at the UN General Assembly in which he spoke of the Amazon merely on the crisis of the fires but did not include the sadly more permanent one in which “the threat to biological life and to spiritual life” come into play and presents “a comprehensive integral threat.” (Instrumentum laboris [Working Document] for the Synod of Bishops Special Assembly for the Pan-Amazon, Part I, Chapter I, 17)

A few days before the conference, Greta Thunberg, a youth activist who has become a global icon in the fight against climate change and organizer of the school climate strike movement Fridays for Future, spoke at the UN Climate Action Summit 2019.

That same week would begin the Special Assembly of the Synod of Bishops for the Pan-Amazon region, to “identify new paths for the evangelization of this segment of the People of God, especially the indigenous peoples, often forgotten and without the prospect of a peaceful future, also due to the crisis of the Amazon rainforest, the lungs of paramount importance for ourplanet.” (Pope Francis, Angelus, 15 October 2017)

In addition, there is an economic crisis forecast (in which the rich usually become richer, and the poor poorer) for the coming year. The encyclical Laudato Si’ (LS), which has been in the background throughout the conference, recalls that “there are not two separate crises, one environmental and one social, but a single and complex socio-environmental crisis.” (LS 139)

Along these lines, the conference recalled how the progressive commodification of resources has become the dominant culture. (D. Carlos Osoro Sierra et al, Conferencia de Clausura: La Iglesia del presente y del futuro con Laudato Si’, XVI Jornadas de Teología, Teología y ecología, 2/10/2019) Wood is a commodity, land is a commodity, water is a commodity, air is a commodity. This dynamic, which understands nature as something to be exploited to the extent that it can bring economic benefit, ends up including people as well.

The concept used to call this behavior is homo œconomicus, and it is characterized because the individual responds to economic stimuli in a way that maximizes utilitarianism and profit itself. Taken to the extreme, the ambition for efficiency leads the homo œconomicus to sacrifice himself, entering into a spiral of selfishness and self-exploitation. (Prof.ª Dra. D.ª Carmen Valor Martínez y Prof.ª Dra. D.ª Amparo Merino de Diego, Mesa Redonda: Consumo, valores y trascendencia, XVI Jornadas de Teología, Teología y ecología 1/10/2019)

In order to help people not to let themselves be defeated by these dynamics, education (D. Carlos Osoro Sierra et al, Conferencia de Clausura: La Iglesia del presente y del futuro con Laudato Si’, 2/10/2019) was pointed out as the way to shape a lifestyle sensitive to the crisis we are facing. At the same time, there is a danger that such education will be insufficiently implemented and limited to informing, rather than training students who will be capable of integrating in such a way that they exercise sustainable habits.

Reasons for hope in education and ecumenism

These consumers often have a religious background. Although they do not currently have a religious practice, they come from Christian families, where they have been inculcated with a sense of responsibility and transcendence.They may belong to parish groups or scouts. They recognize their role in civil society, and feel committed, close to NGOs. Among the traits with which they describe themselves are: decentralization, sociability, openness to new experiences, and moral identity (described with values such as honesty, justice, and peace).

Ecology is also a meeting point in the Ecumenical Movement. (Prof. Dra. Dª. Carmen Márquez Beunza, La cuestión medioambiental en el diálogo interreligioso y ecuménico, XVI Jornadas de Teología, Teología y ecología 1/10/2019) From the philosophy of “doing together what conscience does not oblige us to do separately”, its common concern was formulated, and in the Second European Ecumenical Assembly, ecological responsibility was identified especially in relation to future generations as a theme of common interest for the churches.

The whole material universe is a language of God’s love, of his affection for us. This is perfectly compatible with the dynamic of death and life that occurs in Creation itself. Even the cells of our body are continually dying and being replaced.

Each cell of the human body, imperceptible to the eyes, contains more than 1,000 million atoms, an unimaginable number. Since our body contains so many atoms and taking into account that every seven years on average, we change all the atoms of our body (Prof. Dr. P. Jaime Tatay Nieto SJ, Desafíos ambientales para la teología y la espiritualidad, XVI Jornadas de Teología, Teología y ecología, 1/10/2019), we can say that every century, the atoms are redistributed enough so that the 1,000 million dispersed by Creation can even be in another person.

Statistically speaking, we can say that 1,000 million of the atoms that were in the body of Jesus of Nazareth are now in the reader of this reflection. The number may be anecdotal or inaccurate, but it is interesting to note these consequences that the incarnation also has, in the fragility and weakness of human nature. We do not think about it, and of course it is not the most important thing, but also from this perspective it is God with us.

For the believer, this consciousness must permeate the whole of life, and presupposes conversion at different levels. (C. Ballesteros, F.A. Revilla, Propuestas de conversión ecológica: en la comunidad local y en la ciudad) Cases were presented of initiatives in our environment that help to achieve an integral ecological sensitivity, so that sustainability is sought both in its social perspective, attending to those who are discarded (such as the elderly, children, migrants), as in the environmental, with new habits such as local consumption, energy management, among others.

This implies a series of challenges that cannot be faced without a scientific approach and technological application. There is a risk of affecting the technocratic paradigm that is confusing means with ends. This approach reveals that technology alone is not a solution. (Prof. Dr. D. Pedro Fernández Castelao, La cuestión medioambiental en la antropología teológica, XVI Jornadas de Teología, Teología y ecología 2/10/2019)

The anecdote of the atoms can help. We should all live with devotion to the mystery of God that is woven with the materiality of Creation so that it can never again be seen as a commodity. All creation somehow manifests its Creator, and that perspective also makes us come out of ourselves, sensing the intimate connection between God and all beings, and especially with human beings. This is a call to understand the world as an altar (D. Carlos Osoro Sierra et al, Conferencia de Clausura: La Iglesia del presente y del futuro con Laudato Si’, 2/10/2019), in which all our relationships are marked by reverent respect.

Luis Delgado del Valle SJ is from Sevilla, Spain and joined the Society of Jesus in 2013 after some years working as R&D engineer in a multinational company. He studied philosophy at the Pontifical Gregorian University in Rome and is back in Spain to continue his formation as a Jesuit.