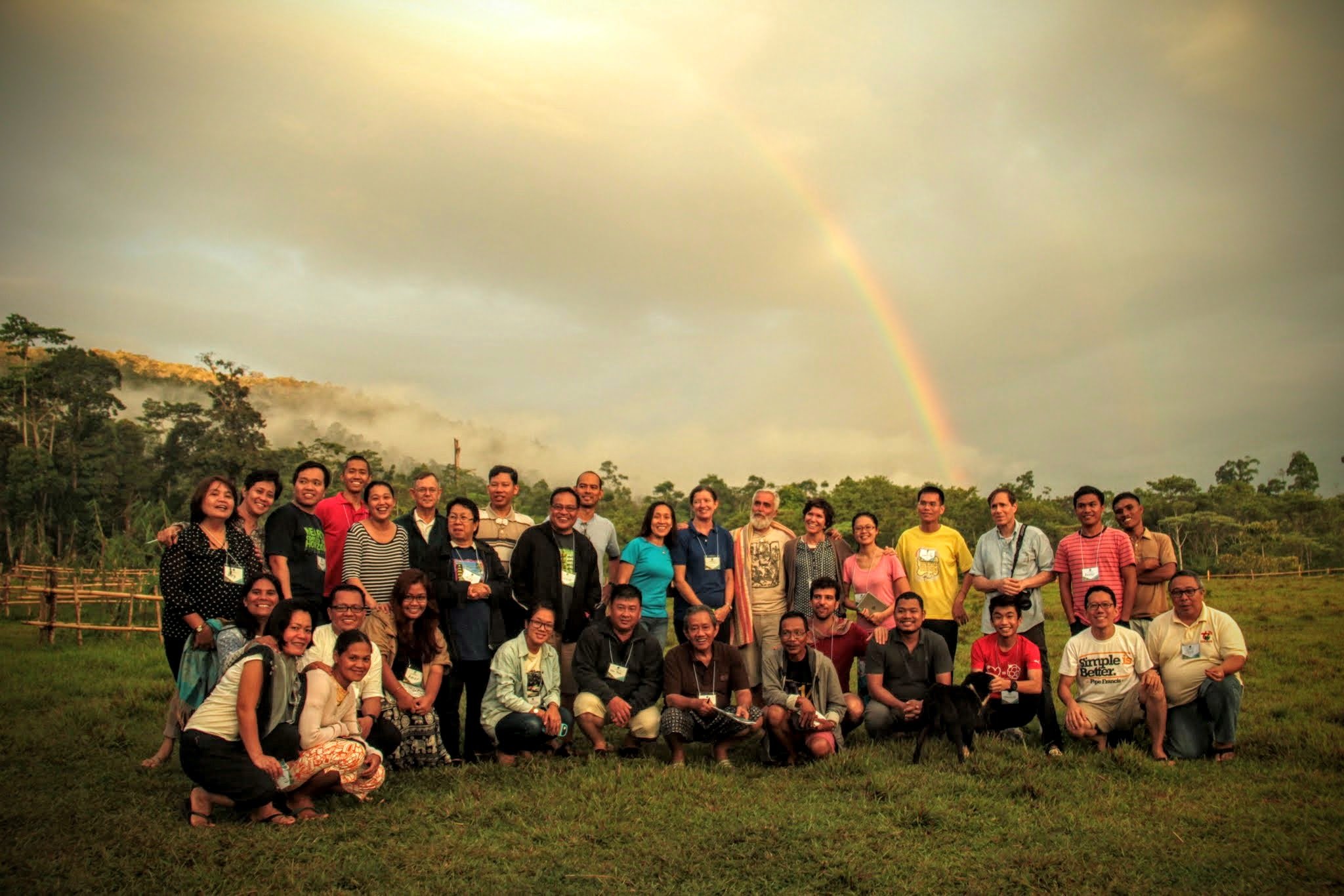 Beginning with gratitude and reflecting on the letter of Father General Adolfo Nicolás in preparation for the 36th General Congregation, the Reconciling with Creation Reflection workshop recently held at the Culture and Ecology Center in Bendum, Bukidnon, Philippines renewed life and mission for 35 participants from 10 member countries of the Jesuit Conference Asia Pacific (JCAP), giving depth to ecological action.

For three days with no Internet, email, and cellular phone signal, participants from Jesuit social, pastoral, and education apostolates, the local diocese and archdiocese, and a local community group of teachers and youth took part in the local exchanges and four workshop sessions – acting as one.  The search for peace and human development in the Philippine Province “Roadmap of Mindanao” helped all connect.

The GC 36 calls “to accompany vulnerable migrants, refugees, indigenous and homeless people” and “to care for both our human and natural environment” and “develop sustainable ecological and social practices both within our Jesuit communities and apostolates” inspired and affirmed the workshop objectives.  As participants worked together and shared experiences, they developed 60 joint actions for strengthening, collaboration, and communication as networks and communities of practice

Bendum’s morning forest clouds inspired gratitude and depth in daily reflection of Laudato si’.  Engagements with Bendum’s children in their simple classrooms, with the youth in the regenerating forest, and with farmers on their degrading land reminded all of the complex social and environmental realities.  The Tribal Council’s message of peace and the children’s gifts of salay, luko and bukana opened participants to “draw courage and strength from those who suffer yet live with hope.”

The modest venue allowed for hearty and practical discussions of challenges in constructing new buildings and common experiences of sharing designs with ecological accountability, as well as the importance of a green building code that allows for simple yet functional infrastructure.

Reflecting on self and social inclusion helped in understanding how important it is to have a list of commitments, acknowledge how difficult it is to change, and how to find joy in being more accountable.

Sharing on apostolic action and youth inspired possible long term engagements with global strategies of the Sustainable Development Goals (SDGs) and the Intended Nationally Determined Contributions (INDCs) of COP21 Paris, so that these are more deeply integrated in the apostolates and mission so that the global can move in the local and at the margins.

Discussing concerns of science and society opened ways to become part of a global strategy of deep reflection and lived actions.  The JCAP map of ecological concerns updated more than 30 ecological concerns in the region.  There was acknowledgment that even as people work with local apostolic commitments, there is great need to be further informed of the breadth of ecological concerns.  For example, even though there is limited involvement in advocacy for the oceans, overfishing was cited as one of the ecological challenges.

Nurturing a community of practice for reconciling with creation helps more effectively network for justice.  If there is the ability to collaborate in Asia Pacific and there is knowledge of what the different apostolates are doing even if small, then connecting with the global is workable.  The workshop participants are all coming from active engagements and sharing these in various communication venues.  These were visually depicted in the JCAP map of ecological concerns, with participants drawing relationship lines to overlay a visual representation of 60 action points that can be done together across the region.

The workshop is titled A Call to Share Transformed Lifestyles for Action  and there is an acknowledgement amongst participants that this action has to come from within and that it is deep.  The openness and willingness to commit as persons, not just as professionals, as job seekers, or as project implementors, was most striking and significant.

As JCAP President Mark Raper, SJ wrote in his welcome message, “(g)iven the enormity of the environmental challenges, we know that what we can do may never be enough. Find motivation in the knowledge that all humanity is affected, most especially the poor… We have a base on which to build.”

Note: The workshop results may be shared during the August JCAP Sustainability Conference, Yogyakarta.  JCAP-RwC plans to do a quarterly update on people’s progress on the 60 joint actions, sustain communications across this community of practice over the coming year taking stock of outcomes by the end of May 2017.  This story is also available at JCAP eNews.