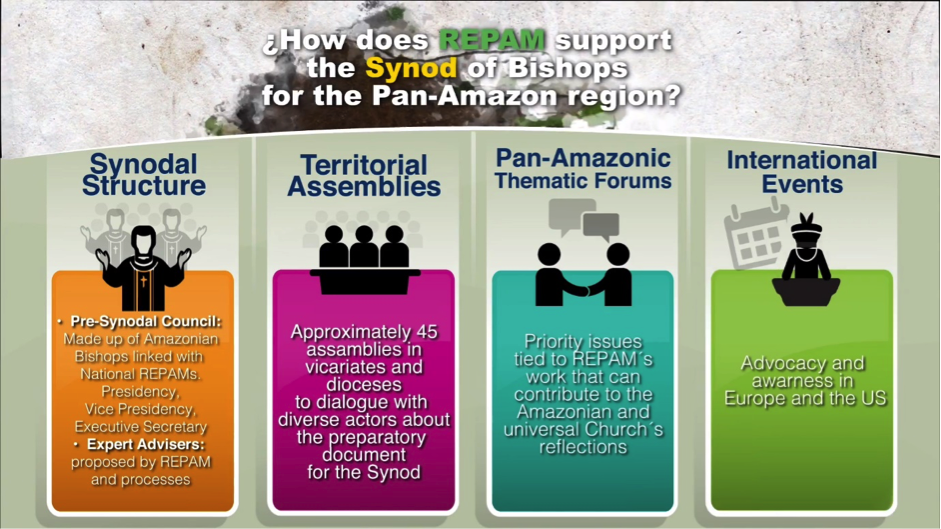 “Each culture and each worldview that receives the Gospel enriches the Church by showing a new aspect of Christ’s face. The Church is not alien to your problems and your lives, she does not want to be aloof from your way of life and organization. We need the native peoples to shape the culture of the local churches in Amazonia. And in this regard, it gave me great joy to hear that one of Laudato Si’s passages was read by a permanent deacon of your own culture. Help your bishops, and help your men and women missionaries, to be one with you, and in this way, by an inclusive dialogue, to shape a Church with an Amazonian face, a Church with a native face.” From Pope Francis during his meeting with Indigenous People of Amazonia at Puerto Maldonado, Peru, 19 January 2018

The Special Assembly of the Synod of Bishops for the Pan-Amazon Region is scheduled in October 2019 on the theme Amazonia: New Paths for the Church and for an Integral Ecology and seeks to address the environmental and social degradation faced throughout the territory that is home to over three million Indigenous Peoples.

This development comes at a crucial time as Brazil’s new President-elect, Jair Bolsonaro, promised to roll back legal protections on the Amazon rainforest, transferring the regulation of, and establishing new, indigenous reserves to the Ministry of Agriculture, Livestock and Supply that is responsible for promoting agribusiness. With more than half of the Amazon within Brazilian borders, this poses a grave threat not only to the lives of its people, but also to the ecological balance of the entire planet.

In addressing these concerns, the Pan-Amazonian Ecclesial Network (Red Eclesial Panamazónica or REPAM), was established in 2014 to respond to the challenges facing the people of the Amazon and their natural environment. REPAM’s four founders are the Justice and Solidarity Department of the Episcopal Conference of Latin America (Consejo Episcopal Latinoamericanoor CELAM), the Episcopal Commission for the Amazon of the Brazilian Conference of Bishops (Conferência Nacional dos Bispos do Brasil), the Latin American Confederation of Religious Orders (Confederación Caribeña y Latinoamerica de Religiosas or CLAR), and Caritas Regional Secretariat for Latin America and the Carribean (Cáritas América Latina y el Caribe).

Cardinal Cláudio Hummes, OFM and President of REPAM, and Mauricio López, Executive Secretary of REPAM, provide an overview of their work and discuss their role in the forthcoming Synod in this brief video that also shares REPAM’s deep communion with Pope Francis and the indigenous communities and the most vulnerable groups in the Amazon, a beautiful but threatened territory.

“REPAM responds from Jesus the Good Shepherd and His Gospel with a clear option for the poor,” shares Cardinal Hummes. Following this description, their operations can be described in terms of a flower and at the middle of this flower lies the heart of the network – the Indigenous Peoples and vulnerable communities in the Amazon region. They respond to their cries and hopes using four approaches that make up the inner circle of the flower:

As millions of Indigenous Peoples’ lives and cultures are at stake due to growing corporate threats, defending their human rights is vital in the case against deforestation and commercial land uses. The indigenous identity is inextricably linked with their surroundings, and destruction of their environment is felt at a deep and very personal level.

Formation and pastoral methods from a Pan-Amazonian and itinerant perspective

The unique context in which the Indigenous People of the Amazon live means that any formation or pastoral methods cannot simply be imposed from an outside perspective. Their ways of life are important to them, and so any changes must come from their own personal desires. To this end, bishops and missionaries work together with communities, gradually connecting with their hearts and understanding their perspectives and visions for the future.

Churches in the frontiers

Churches situated at the frontiers enjoy close relationships with indigenous communities. However, their far-off locations often mean it is difficult to immediately respond to concerns in these areas. REPAM seeks ways to address this by building bridges among different the Churches and communities so that they may learn to strengthen each other and work together.

Securing an economic future for communities is vital not only in ensuring sustainability, but for the greater well-being and dignity of Indigenous Peoples. The dominant econonomic model employed in the Amazon poses a threat to the territory, but helping them adapt while at the same time building on their indigenous identity increases their chances of persevering, and in defending and uplifting their territories.

REPAM engages in three main services that aid in managing the work around the vast territories. These make up another layer in the flower:

Social transformation requires personal conversions throughout and around the territory. REPAM finds ways for a diverse set of voices to be heard in pursuit of greater solidarity, and in understanding the changes needed.

There is recognition that even local action can have global impacts, and vice versa.  REPAM connects and builds relationships with international networks who share similar concerns to better respond to the challenges in the Amazon and also in other “jungles,” as they like to call them. This includes Asia and the Congo Basin, two areas that also have great biodiversity and help provide ecological balance to our common home.

The vast geographic territory of the Amazon often makes it difficult to pinpoint specific problem areas and to formulate solutions needed. The development of local knowledge and assessments are of great help, and mapping efforts contribute to effectively visualizing and locating where and how to approach challenges.

Countries where REPAM is active

Completing the flower are the petals that represent seven out of nine countries in the Amazon region where REPAM has existing national processes: Guyana, Venezuela, Colombia, Ecuador, Peru, Bolivia, and Brazil.

Visualized by way of concentric circles, REPAM uses a bottom-up approach by listening first to the perspectives of the people, the bishops, and missionaries (Incarnation in the Territory). This is to give precedence and importance to direct accompaniment and on-the-ground accounts as bases for informed action before moving up to national (National Amazonian Territorial Networks) and regional (Pan-Amazonian Territorial Network) levels. It also concentrates focus.

Despite the growing scope of the territories involved, the network can remain grounded in its mission for the Amazon and its people. Geography is not an obstacle to proximity, and “REPAM has tried and managed to put them together to respond as one body in a territorial approach.”

A global approach (International Ecclesial Advocacy) is the outermost circle in the diagram. This encompasses the social teachings of the Church coming primarily from Laudato Si’ and provides a backdrop in responding to socioenvironmental and evangelical challenges which call for pastoral conversion. 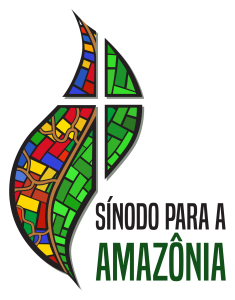 Supporting the Synod of Bishops for the Pan-Amazon region

The Pre-Synodal Council is made up of Amazonian Bishops linked with National REPAM entities, the Presidency, Vice-Presidency, and Executive Secretary. To complete the Synodal Structure, REPAM was requested to select an integrated group of local expert advisers who then worked in crafting the first draft of the preparatory document.

As part of this process, REPAM will conduct up to 45 territorial synodal assemblies in vicariates and dioceses to dialogue with diverse sets of actors to get their perspectives. These include people from the territory who will have a chance to express “their desires, their hopes, and their cries.” True to its mission and commitment, there will be a significant presence of Indigenous Peoples, communities, and missionaries.

Pan-Amazonic Thematic Forums will also be held to tackle priority issues and to consult with experts and persons who can contribute to assessing concerns and formulating strategies for action. These are important occasions for the Church to discern ways of becoming more present in the Amazon.

Lastly, international events will seek to advocate and raise awareness throughout Europe and the US. This includes an international conference in March 2019 at Georgetown University, Washington DC, USA on “Integral Ecology: A Synodal Response from the Amazon and other essential biomes/territories for the care of our common home” which is intended to bring together diferent perspetives and voices to contribute to discussions in the Amazonian Synod in October 2019.

Southworld, a web magazine produced by the Comboni Missionaries, also featured REPAM in this story: The Church in Amazonia: Condemnation and Proclamation (December 2017).

2 thoughts on “REPAM: Shaping a church with an Amazon face and an indigenous face”