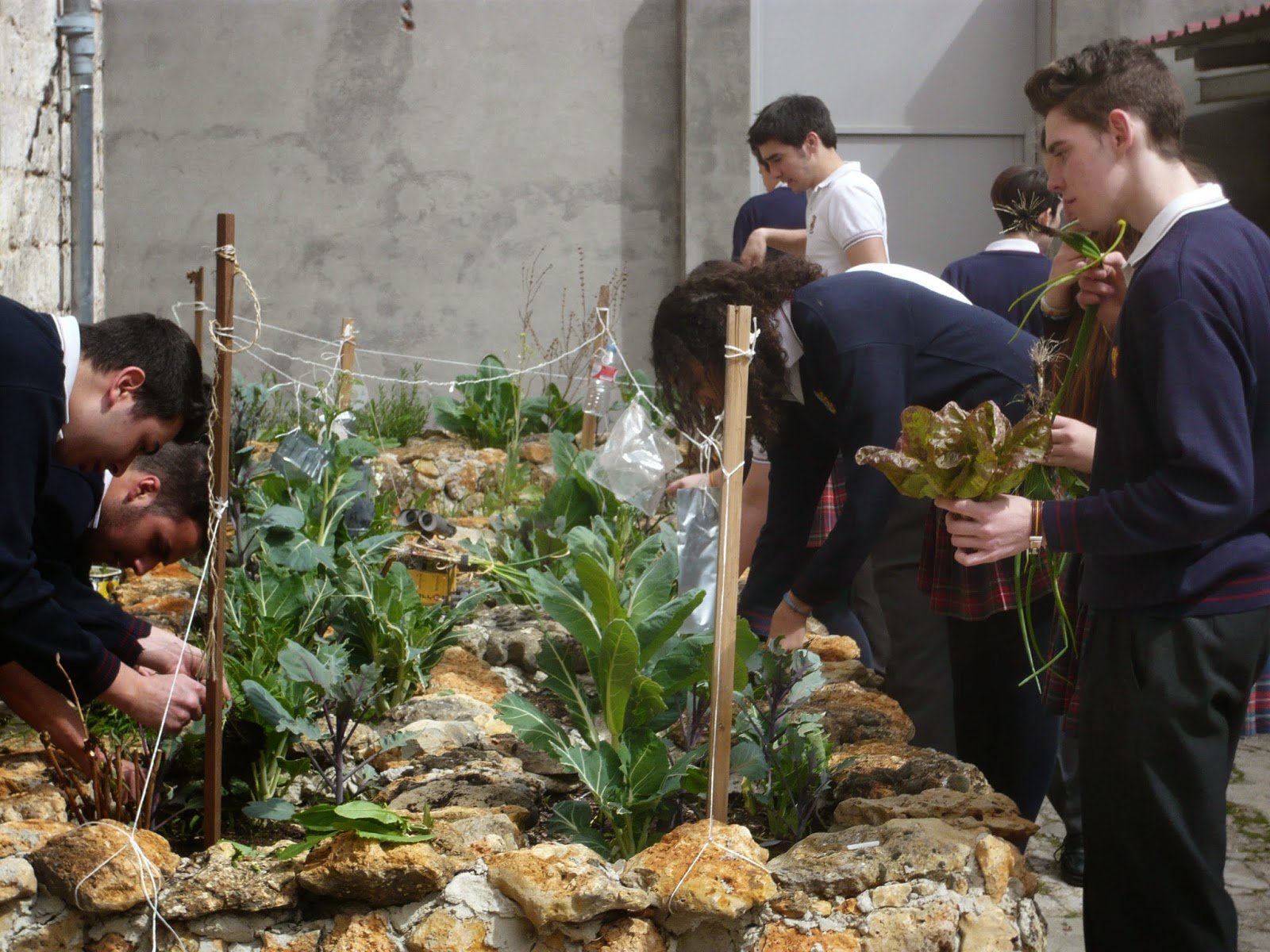 Establishing organic vegetable gardens on the playground and using recycled materials are some of the ecological projects emerging from the creativity of students (16-17 year old 4th ESO) of Colegio San José in Valladolid, Spain.

The initiative began when the students visited Escuela Universitaria de Ingenería Agrícola (INEA), an attached college of the University of Valladolid offering courses in agricultural engineering. INEA is a Jesuit educational institution established in 1964 as a technical school to provide training in the management of agricultural enterprises. At present, more than 400 retirees cultivate ecological gardens for their own consumption. The Jesuits were delighted to learn about the project. They encouraged this proposal entitled Sanjo’s Green 2.0 that explores the building of gardens in tubs and other recycled materials and planting organic plants provided by INEA.

The project won the ‘Think Big’ Youth competition and received €400. And with an grant of €1,500 from a local bank, they further developed this project which was led by the students’ teacher, Ms Esther Garrido, and a retired teacher, Mr Manolo Cisneros.

“It has been a community learning,” Ms Garrido said, “because everything is new to everyone and we are developing skills that are not acquired in the classroom.” Students are continuing with this initiative even a year later. “We can do it,” they said as they keep on watering the space and planting cabbages, lettuce, onions, basil and rosemary.

Whilst the garden is growing, the team of 11 students also strengthen their friendships and extend that commitment and sensitivity for the natural environment among their peers, teachers, families, friends, and children as well.

They called for proposals at school and provided an awareness workshop for students in the first and second primary education levels and they linked with the Department of Informatics in disseminating their digital messages on social network. In the kitchen, they look for recycled items that can be used in the workshops with other children. Students from the first Secondary Education (ESO) prepared a booklet with pictures of vegetables they planted, their characteristics and nutritional values, as well as recipes to send to their twinned association in Nicaragua.

The excitement from the project is spreading. During the Easter holidays, the students went to a civic center in Valladolid and gave children a free workshop for three days. They worked with their hands planting vegetables, listened to a storyteller talking about nature, and played games to learn more about the environment.

The next step is to build the greenhouse, and for that reason, the students are seeking financial support. “They are also interested in the association of Leon and Seville Jesuit schools because of their orchards,” shares Ms Garrido.

Their commitment to the environment has become part of their social responsibility. Recently they have set up a collection point in the playground for collecting used oil. They are also sponsored by the San Juan de Dios organisation to collect used clothes for disabled people. “The work pays off and to undertake such a project, teamwork is very important,” says student Daniel García. “We are more in touch with nature than before,” adds Yaisa Losa, another student.