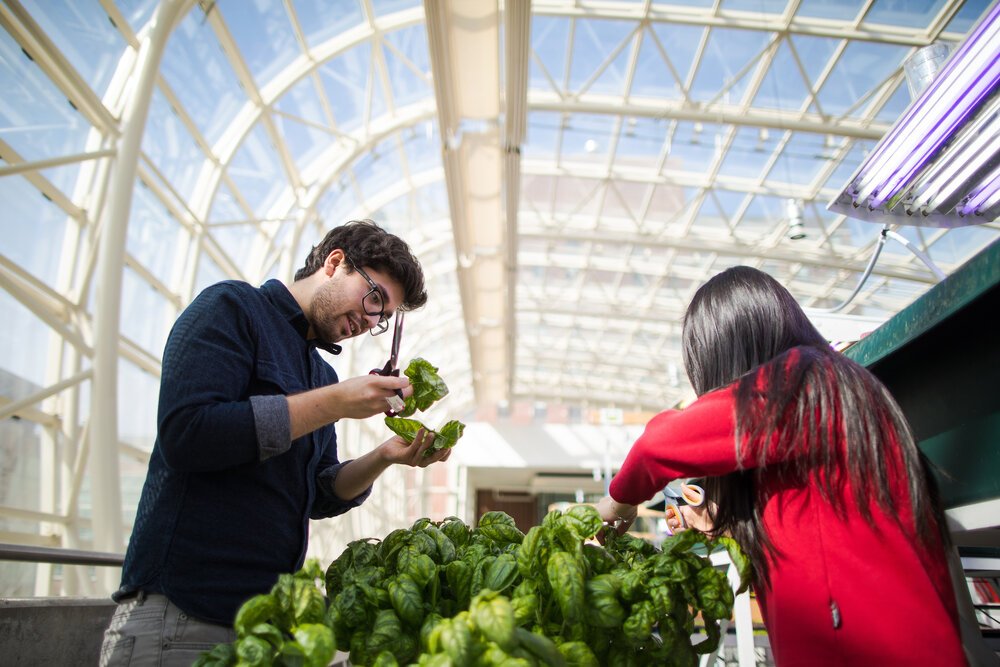 My colleagues in the sciences at Loyola University Chicago’s (LUC) Institute of Environmental Sustainability (IES) spend much of their time researching ways to help the planet repair itself. They ask the practical questions: Which plants are best at pulling lead out of contaminated soils? Which evolutionary traits in plants can help us devise more sustainable agricultural practices? How can we convert campus food waste into clean, renewable energy?

But my IES colleagues in humanities spend much of their time asking the big questions: How do we shift our way of looking at nature from the perspective of a free storehouse of exploitable natural resources, to a sacred gift that gives life? How do we fall in love with nature and experience its awesome beauty so as to truly see its intrinsic value?

At IES, we’re integrating the sciences and the humanities to respond to Pope Francis’ impassioned call to care for creation. In his 2015 encyclical, Laudato Si’, the Pope reminds us that we must design academic programs that not only teach fundamental science, but also provide the humanistic conditions for “ecological conversion” within our students.

Pope Francis describes our intimate connection with nature as an “integral ecology.” Three points inform and inspire the interdisciplinary science and humanities work we do at IES to build that into a reality:

1. All life is interdependent, connected, and related.

The first living organism on earth, a bacterial life form, came into existence 4.1 billion years ago. From there, all other higher forms of life arose. 360 million years ago, the process of evolution created diverse forest ecosystems. The tree of life continued to proliferate and today, we have over 12 million distinctive species of advanced life forms, in addition to an even higher number of simple life forms.

Each species fills a vital ecological niche in earth’s fantastically complex web of life. Some species are food to others; some provide physical habitat; some decompose the waste of plants and animals; some convert CO2 to oxygen; and some convert oxygen to CO2. Together, all species support the balance of the entire biosphere. The biosphere, in turn, helps to regulate earth’s systems, such as the hydrological cycle, the biogeochemical cycling of elements, and the climate system.

This is what Pope Francis means by an “integral ecology”: everything is connected.

In this remarkably intricate design of nature, everything is interdependent. The Pope challenges us to listen to the voice of Indigenous Peoples around the world, who remind us that we are relativesto the plants, animals and abiotic processes around us. Pope Francis poignantly writes in Laudato Si’(11):

“[St. Francis] would call creatures…‘brother’ or ‘sister.’ Such a conviction cannot be written off as naive romanticism…[being] intimately united with all that exists [entails] a refusal to turn reality into an object simply to be used and controlled.”

Humans didn’t appear on the evolutionary tree until very late in history; we existed as nomadic hunter-gatherers living in small groups of 20 to 40 people for most of our existence.

Our survival is completely dependent on all other forms of life in the biosphere. In the last 200 years, we have grown from 1 billion to more than 7.7 billion people on the planet, heading for 10 billion by 2050. This unsustainable population explosion is overwhelming the earth through deforestation, extensive agriculture, overfishing the oceans, and dumping waste into the atmosphere, oceans and on land.

Pope Francis is correct to point out that global population issues should not blind us to the serious problem of First World consumerism and waste. In Laudato Si’(15), Pope Francis says, “We must draw on ‘the results of the best scientific research available, letting them touch us deeply.’”

The best science is showing us that it is not possible for our earth to sustain the projected human population densities, as our rate of consumption and waste production continues to increase.

Our economic model of infinite growth is flawed for a planet with finite resources. Our economy is driven by extracting natural resources to make goods that are mass produced, sold and used lightly so as to perpetuate a single-use-disposable system. We are stealing the future, selling it in the present, and calling it gross domestic product. We must develop an economy that is circular and based on healing and restoring the earth, instead of stealing and exploiting it.

Pope Francis puts his finger precisely on the problem in Laudato Si’ (22):

“We have not yet managed to adopt a circular model of production capable of preserving resources for present and future generations, while limiting as much as possible the use of non-renewable resources, moderating their consumption, maximizing their efficient use, reusing and recycling them. A serious consideration of this issue would be one way of counteracting the throwaway culture which affects the entire planet…”

Integrating the humanistic dimensions of Laudato Si’ with solid science encourages environmentally sustainable action. In some cases, the actions are simple mimics of nature.

Here at LUC, in the IES aquaponics systems, where fish and crops grow together in a recirculating system, fish waste provides the fertilizer needed by plants. Plants in turn act as the biological filter, removing waste and oxygenating the water for the fish. Resources don’t get depleted and wastes don’t build up because nature has a circular economy.

Another earth-healing action is converting waste vegetable oil from our cafeteria’s deep fat fryers into biodiesel to fuel our shuttle buses. This diverts waste from the landfill and offsets our petroleum diesel consumption.

Our students are also driving change. At LUC, students led the way toward our banning the sale of bottled water and the use of plastic bags in our campus stores. They have also worked with vendors to help make our athletic events zero-waste.

We are striving toward a circular economy on our campus at LUC, where consumption and waste are reduced, and everyday materials are re-used. Every action, decision and purchase we make has a ripple effect both upstream in the supply chain, and downstream in the waste stream.

Pope Francis teaches us to recognize the urgent need to become integral ecologists: people who dare to imagine a healed earth and are willing to put their shoulders, hearts and minds into the task. In so many ways, the science-humanities partnership at IES strives to meet Pope Francis’ call.

Dr Nancy Tuchman is the Founding Dean of the Institute of Environmental Sustainability at Loyola University Chicago and is a core member of the Ecojesuit network. This story originally appeared in the Association of Jesuit Colleges and Universities, April 2020 Connections.