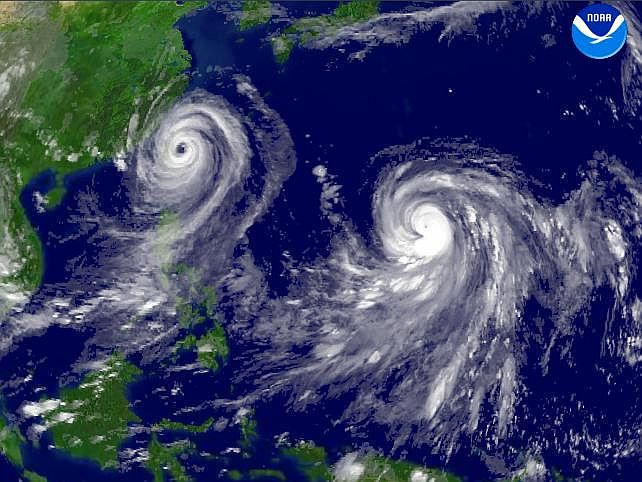 As the Earth rotates around the sun and energy is moved from the equator poleward, the ocean-atmosphere system responds by creating currents in the ocean where in places are large enough to be essentially permanent.  As the trade winds blow westward just above the equator, water is pushed up in the western Paciﬁc causing sea levels to be higher there than on the eastern side.  As the Earth’s axis tilts, the seasons change and the energy balance shifts, aﬀecting sea levels.

Global sea level change is a phenomenon that is considered at decadal timescales or longer.  Nevertheless, this climatic variation aﬀects weather on a seasonal as well as year-to-year basis.  An understanding of these eﬀects is important in responding more eﬀectively to the impacts of sea level rise that occur in the short term.

In the previous article, we discussed the spatial variability of sea levels around the Philippines.  Data from satellite altimeters that measure sea surface height at diﬀerent points that cover the Earth over the last two decades reveal that rates of change vary from one area to another.  Variability is also observed when analyzing data at periods shorter than a year.

Consider the seasons when low atmospheric pressure and stronger winds cause higher sea levels around the Philippines: the summer monsoon usually lasts between three to four months centered around August while the winter monsoon is usually shorter and begins sometime in December.  The ﬁgures show mean sea surface height anomalies for the periods July to September and December to February, respectively, for every year from 1993 to 2009.

Changes in sea level is measured by taking the diﬀerence between the long-term average sea level and sea surface height measurements made at a point during a particular time.  The use of the term anomaly refers to this departure from the expected sea level.  Westerly winds are stronger and the temperature diﬀerential between land and ocean is larger during the summer monsoon.  Thus large areas of the ocean surrounding the Philippines have sea levels that are greater than average at this time.  The winter monsoon is a milder period causing relatively lower-than-normal sea levels.  In 1997, sea level was unusually low during both monsoons.

A closer look reveals that in both monsoons, patterns of unusually high water levels are evident during the years roughly 1998-2000 and 2007-2009.  It turns out that these periods are associated with a strong switch between the warm and cold phases of the El Niño and Southern Oscillation (ENSO) phenomenon.  When the trade winds that blow west weaken, a warm pool of water persists in the eastern Paciﬁc instead of being pushed west.  The warmed atmosphere causes moisture to rise and storms to develop there.  As the winds strengthen, the area of formation of storms is pushed westward, increasing the potential for tropical cyclones to make landfall.

A quick transition between extremes reﬂects more unusual conditions.  The highest water level during the summer monsoon for all the years considered is an anomaly of about 36 millimeters and patches of very high water occurred in the eastern coast of the Philippines and along northwestern Luzon.  More unusual are high water levels during the winter monsoon.  When they occur, water levels in the southern and central Philippine seas can be as high as 22 millimeters above normal.

Short-term sea level anomalies like the three-month averages considered do not indicate permanent land submergence.  Only an increasing long-term average suggests that land may be lost to rising waters.  When the anomalies do signiﬁcantly deviate away from the long-term average, however, there is potential for more severe coastal ﬂooding, which will be discussed in the next article.

Even intermittent inundation by seawater can permanently damage land by reducing soil fertility.  Soil rehabilitation, while possible, may be more expensive than converting to other uses.  Many riceﬁelds in Central Luzon and along Manila Bay have been recently converted to ﬁshponds due to salination.  In turn, any change in the interaction between saltwater and freshwater may reduce the storage capacity of freshwater aquifers.  What impact this will have depends on the environmental service these aquifers provide.

One strategy in adapting to the impacts of sea-level rise is to learn by doing.  When land becomes unavailable for one use it is converted to another.  If groundwater becomes too salty to drink, other freshwater resources are found.

Science provides us with what we can know from the natural environment.  What other things can we know?

Diﬀerent communities will have varied means and capacities to approach the unique way in which sea-level rise will aﬀect them.  There are no easy answers that can be universally applicable.  It will be necessary to allow room to creatively ﬁnd close-to-optimal solutions that perhaps combines retreat, protection, and accommodation in an area.  Managed action, more than a reactive response, will provide a sense of control thereby reducing the overall risk and its eﬀects.  Considering options for anticipatory response may also prove to be more cost-eﬀective.

As society becomes more complex, so does its relationship with the environment.  The more we depend on nature the more fragile it becomes and particular attention will need to be made to continue developing human solidarity.  If violence due to resource disputes or other causes is to be avoided, cultural values may need to be reconsidered.  But what can we know now to encourage action in the right direction?  Here is where the science comes in.  While the scientiﬁc community strives to understand the earth system better, it oﬀers information about sea level change that is useful if it can be communicated properly.  How we incorporate this insight will help achieve social and environmental justice.

4 thoughts on “Sea-level rise in the Philippines: ENSO and monsoon influences”