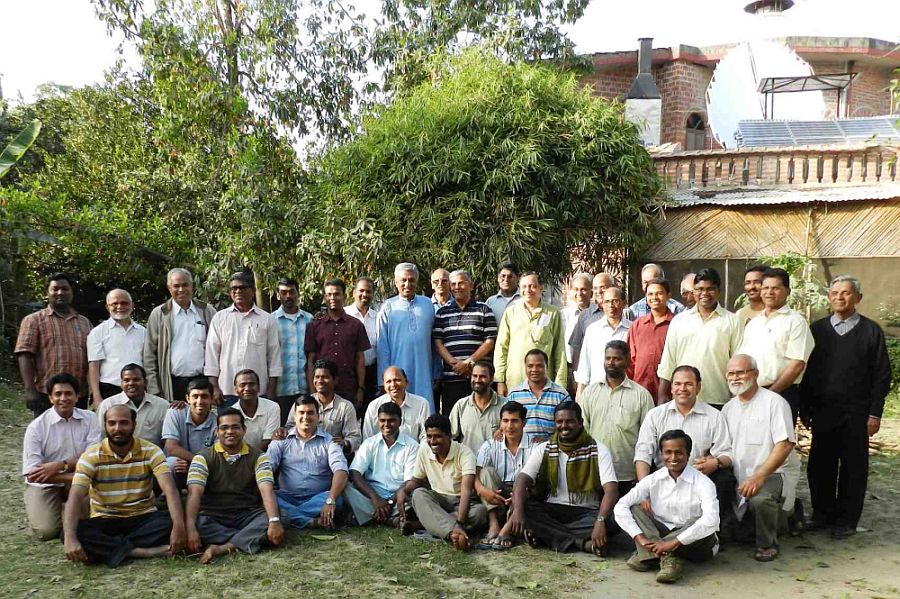 In the ‘90s, ecology, environment, global warming were words hardly known, little heard, and scarcely present in the Jesuit consciousness, or for that matter, of the world.  Fr KM Mathew, SJ, a noted scientist in botany and a visionary who passed away in 2004, organized an Assistancy level meeting of Jesuits linked with earth sciences in 1998 at Shenbaganur.

Fourteen years later, some 50 EcoJesuits met last March 2012 at Tarumitra, Patna (capital of Bihar state in India).  All but four Provinces of South Asia were represented, with 15 theologians from the Zonal Theologate near Patna.  The intensity of awareness, the depth of concern and the degree of involvement may differ, but ecological awareness is a reality among Jesuits today.  The Church and the Society are taking the lead in making it the mission of every Christian.

Sharing their expectations from the EcoJesuit Meet, the participants spoke about a desire to know and understand ecological issues and learn from their confreres how to get involved in ecological reflection and action.  They wanted to see, experience and learn from the Tarumitra experience.  Some expressed specific concerns about deforestation, pollution, global warming, and the plight of the poor and the tribals, who bear the most impact from ecological degradation.  Others wanted to delve deeper into eco-spirituality.  The sincerity and intensity of the ecological concerns of all who joined were very evident.

Archbishop William D’Souza, SJ of Patna spoke to us.  Inspired and suggested by a 13-year old Adivasi girl, Shweta Marandi, he wrote a letter to the Archdiocese in 2010 with the topic “Celebrate Christmas with less Carbon.”  He asked people to celebrate Christmas with less carbon footprint and suggested an alternative to stars with electrical lights, “Let us burn the Christmas stars of our love by sharing the saved amount with our needy brethren instead.”

As Provincial of Patna, he asked Fr Robert Athickal, SJ in 1996 to set up the Tarumitra Bio-reserve on 10 acres of paddy land at the Xavier Teachers’ Training Institute (XTTI).  In less than 10 years, Tarumitra became a unique place of pilgrimage for all who dream of an earth as the Lord made it, before we messed it up.

The Provincial of South Asia, Fr Edward Mudavassery, SJ, participated fully in the Eco Meet, as did the Provincial of Delhi, Fr Varkey Perekatt, SJ.  The presence and feedback given by three women (Sr Prema, SCC, Ms Margaret Molomoo, and Dr Mudita Sodder, RSCJ) all deeply involved in ecological action, was a significant contribution.

Many shared about their involvement in ecological action.  Jesuits in different Provinces can be found in a variety of environmental activities:

I am sure that more environmental activities exist among the Jesuits in South Asia.  Provinces like Kolkata, Madurai, Kerala, Karnataka have officially committed themselves to the Jesuit ecological mission.

“Healing a Broken World,” the well-researched document of the Society of Jesus on our ecological mission, was presented by a Jesuit social scientist from Mumbai Province, Anthony Dias, SJ, followed by a symposium.  All highlighted the centrality, urgency and universality of the ecological mission and the need to join hands with all people of goodwill.

A guided exploration of the man-made forest at Tarumitra and their new organic farming venture was heartwarming.  Fr Paul Mariadass, SJ, the present Director of Solar Alternatives and Associated Programmes in Patna, showed us the incredible amount of alternate energy activities going on there.

The presence of young Jesuits, besides the middle-aged and older ones, enhanced our hope for the future.  It was very consoling to learn that more and more provinces are sending scholastics for professional training in environmental science.  The Jesuit ecological mission calls for deep scientific knowledge and sound theory resulting in creative, effective, and judicious interventions to build a better tomorrow.  The critical role of children and youth in creating a healthier, saner, and safer Earth is obvious.

The final plenary session took up five practical, high priority points of the South Asian Assistancy, guided by the Ignatian criteria for Jesuit choices – that they be urgent, neglected, and universally profitable:

1. Eco-spirituality rooted on the Spiritual Exercises of St. Ignatius – through eco-retreats at Province and Zonal levels, pastoral and educational work, workshops for eco-spiritual retreat masters

2. Eco-sensitization and action-oriented awareness – through ecological awareness-creation programmes for Jesuits, other religious, the faithful, and students that result in concrete actions, beginning in our communities; focusing on children; pooling personnel, resources, and expertise; creative use of all media; and networking with all ecologically-conscious people to spread awareness.

3. Graded curriculum for formation – through fraded eco-sensitization programmes; guided field exposure programmes, with reflection; and a task force to prepare the curriculum.

4. Research and study – through preparing professionally qualified Jesuits in various aspects of ecology; setting up institutions for theoretical, applied, and practical research and implementation; networking and advocacy.

Towards the end, a final statement of the South Asian ECOJESUIT MEET 2012 was developed and accepted by the participants.  This statement and the full report can be viewed and downloaded at Jesuits in Social Action.