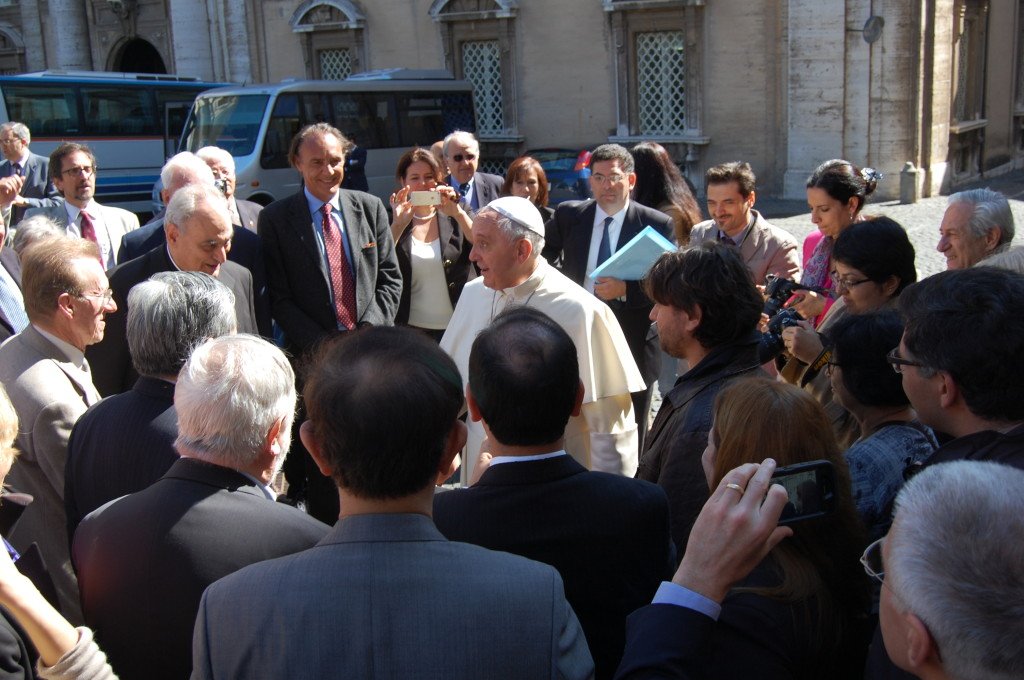 Humanity has entered a new era. Our technological prowess has brought humanity to a crossroads. We are the inheritors of two centuries of remarkable waves of technological change: steam power, railroads, the telegraph, electrification, automotive transport, aviation, industrial chemistry, modern medicine, computing, and now the digital revolution, biotechnologies and nanotechnologies. These advances have reshaped the world economy into one that is increasingly urban and globally connected, but also more and more unequal.

However, just as humanity confronted Revolutionary Change (Rerum Novarum, the Encyclical of Pope Leo XIII on Capital and Labor)  in the Age of Industrialization in the 19th century, today we have changed our natural environment to such an extent that scientists are redefining the current period as the Age of the Anthropocene, that is to say an age when human action, through the use of fossil fuels, is having a decisive impact on the planet. If current trends continue, this century will witness unprecedented climate changes and ecosystem destruction that will severely impact us all.

Human action which is not respectful of nature becomes a boomerang for human beings that creates inequality and extends what Pope Francis has termed “the globalization of indifference” and the “economy of exclusion” (in Evangelii Gaudium), which themselves endanger solidarity with present and future generations.

The advances in measured productivity in all sectors – agriculture, industry and services – enable us to envision the end of poverty, the sharing of prosperity, and the further extensions of life spans. However, unfair social structures (Evangelii Gaudium) have become obstacles to an appropriate and sustainable organization of production and a fair distribution of its fruits, which are both necessary to achieve those goals. Humanity’s relationship with nature is riddled with unaccounted for consequences of the actions each of us take for both present and future generations. Socio-environmental processes are not self-correcting. Market forces alone, bereft of ethics and collective action, cannot solve the intertwined crises of poverty, exclusion, and the environment. However, the failure of the market has been accompanied by the failure of institutions, which have not always aimed at the common good.

Problems have been exacerbated by the fact that economic activity is currently measured solely in terms of Gross Domestic Product (GDP) and therefore does not record the degradation of Earth that accompanies it nor the abject inequalities between countries and within each country. The growth in GDP has been accompanied by unacceptable gaps between the rich and the poor, who still have no access to most of the advancement of the Era. For example, about 50% of available energy is accessed by just one billion people, yet the negative impacts on the environment are being felt by the three billion who have no access to that energy. Three billion have so little access to modern energy that they are forced to cook, heat, and light their homes with methods dangerous to their health.

The massive fossil fuel use at the heart of the global energy system deeply disrupts the Earth’s climate and acidifies the world’s oceans. The warming and associated extreme weather will reach unprecedented levels in our children’s life times and 40% of the world’s poor, who have a minimal role in generating global pollution, are likely to suffer the most. Industrial-scale agricultural practices are transforming landscapes around the world, disrupting ecosystems and threatening the diversity and survival of species on a planetary scale. Yet even with the unprecedented scale and intensity of land use, food insecurity still stalks the planet, with one billion people suffering from chronic hunger and another billion or so suffering from the hidden hunger of micronutrient deficiencies. Tragically, a third of the produced food is wasted, which as Pope Francis said is “like stealing from the table of the poor and the hungry.”

In view of the persistence of poverty, the widening of economic and social inequalities, and the continued destruction of the environment, the world’s governments called for the adoption by 2015 of new universal goals, to be called Sustainable Development Goals (SDGs), to guide planetary-scale actions after 2015. To achieve these goals will require global cooperation, technological innovations that are within reach, and supportive economic and social policies at the national and regional levels, such as the taxation and regulation of environmental abuses, limits to the enormous power of transnational corporations and a fair redistribution of wealth. It has become abundantly clear that Humanity’s relationship with Nature needs to be undertaken by cooperative, collective action at all levels – local, regional, and global.

The technological and operational bases for a true sustainable development are available or within reach. Extreme poverty can be ended through targeted investments in sustainable energy access, education, health, housing, social infrastructure and livelihoods for the poor. Social inequalities can be reduced through the defense of human rights, the rule of law, participatory democracy, universal access to public services, the recognition of personal dignity, a significant improvement in the effectiveness of fiscal and social policies, an ethical finance reform, large scale decent work creation policies, integration of the informal and popular economic sectors, and national and international collaboration to eradicate the new forms of slavery such as forced labor and sexual exploitation. Energy systems can be made much more efficient and much less dependent on coal, petrol and natural gas to avoid climate change, protect the oceans, and clean the air of coal-based pollutants. Food production can be made far more fruitful and less wasteful of land and water, more respectful of peasants and indigenous people and less polluting. Food wastage can be cut significantly, with both social and ecological benefits.

Perhaps the greatest challenge lies in the sphere of human values. The main obstacles to achieving sustainability and human inclusion are inequality, unfairness, corruption, and human trafficking. Our economies, our democracies, our societies and our cultures pay a high price for the growing gap between the rich and the poor within and between nations. And perhaps the most deleterious aspect of the widening income and wealth gap in so many countries is that it is deepening inequality of opportunity. Most importantly, inequality, global injustice, and corruption are undermining our ethical values, personal dignity, and human rights. We need, above all, to change our convictions and attitudes, and combat the globalization of indifference with its culture of waste and idolatry of money. We should insist upon the preferential option for the poor, strengthen the family and community, and honor and protect Creation as humanity’s imperative responsibility to future generations. We have the innovative and technological capability to be good stewards of Creation. Humanity needs urgently to redirect our relationship with nature by adopting the Sustainable Development Goals so as to promote a sustainable pattern of economic development and social inclusion. A human ecology that is healthy in terms of ethical virtues contributes to the achievement of sustainable nature and a balanced environment. Today we need a relationship of mutual benefit: true values should permeate the economy and respect for Creation should promote human dignity and wellbeing.

These are matters on which all religions and individuals of goodwill can agree. These are matters that today’s young people around the world will embrace, as a way to shape a better world. Our message is one of urgent warning, for the dangers of the Anthropocene are real and the injustice of globalization of indifference is serious. Yet our message is also one of hope and joy. A healthier, safer, more just, more prosperous, and sustainable world is within reach. The believers among us ask the Lord to give us all our daily bread, which is food for the body and the spirit.