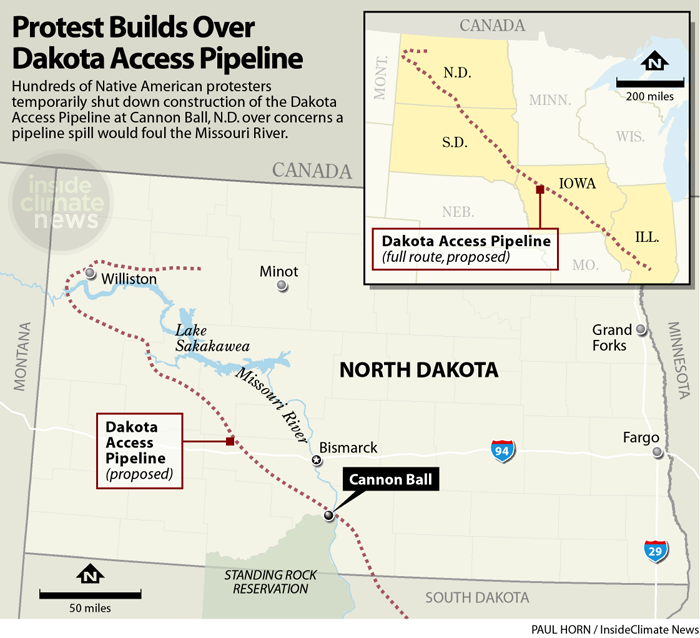 Members of the Standing Rock Sioux Tribe gathered the support of dozens of other tribes in North Dakota, USA, in recent months to protest the 1,172-mile (1,890 km) Dakota Access Pipeline, proposed in 2014 but expected to be completed this year.

The pipeline, with a planned investment of US$ 3.8 billion and to be built by the Texas-based Energy Transfer Partners, will transport daily 570,000 barrels of fracked crude oil from the Bakken oil field in North Dakota to a refinery near Chicago, Illinois.  With the development of fracking in the oil-rich Bakken Shale, the pipeline connects these oil wells to the consumer markets and will travel a circuitous route through the Midwest and into Oklahoma, shipping oil to the Gulf of Mexico as well.

The project generated controversy as the pipeline will travel underneath the Missouri River, the primary source of the drinking water for the Standing Rock Sioux, and traverse sacred burial grounds.

There are three main implications of the Dakota Access Pipeline that the Standing Rock protests claim.  First, the pipeline destroys places where ancestors are buried and which they consider sacred sites.  Second, the pipeline has direct physical impacts on the territory, land displacement, and water pollution and protesters believe the project poses a significant threat to the quality of the drinking water.  Third, there are the potential risks of accidents due to leaks and ruptures, disasters that have happened in oil and gas pipelines.  In a report from Time, the Pipeline and Hazardous Materials Safety Administration of the US Department of Transportation reported more than 3,300 incidents of leaks and ruptures since 2010.

The protest has gained the attention of the Office of the UN High Commissioner for Human Rights through its Special Rapporteur on the rights of indigenous peoples, Victoria Tauli-Corpuz, who called on the US government to halt construction of the pipeline as it poses a significant risk to the drinking water of the Standing Rock Sioux Tribe and threatens to destroy their burial grounds and sacred sites.

“The tribe was denied access to information and excluded from consultations at the planning stage of the project and environmental assessments failed to disclose the presence and proximity of the Standing Rock Sioux Reservation,” the Special Rapporteur stressed.  “The United States should, in accordance with its commitment to implement the Declaration on the rights on indigenous peoples, consult with the affected communities in good faith and ensure their free, and informed consent prior to the approval of any project affecting their lands, particularly in connection with extractive resource industries,” Ms. Tauli-Corpuz said.

The UN Secretariat of the Permanent Forum on Indigenous Issues also released a statement on 22 November 2016 on the escalating violence against unarmed protestors at the construction site, after undertaking an investigation.

And while understanding “that President-elect Trump is one of the investors in Energy Transfer LLC – the company undertaking the construction of the Dakota Access Pipeline,” they “ask the President-elect to use his capacity to suspend the construction that affects the compliance of the UN Declaration on the Rights of Indigenous Peoples and violates the human rights of indigenous peoples.”

“A step in this direction would be a positive signal towards the search for a peaceful solution to the issues surrounding the lack of consultation with, and consent of the Standing Rock Sioux peoples, as well as the recognition of their rights to lands, territories and resources in relation to the Dakota Access Pipeline project,” the statement recommends.