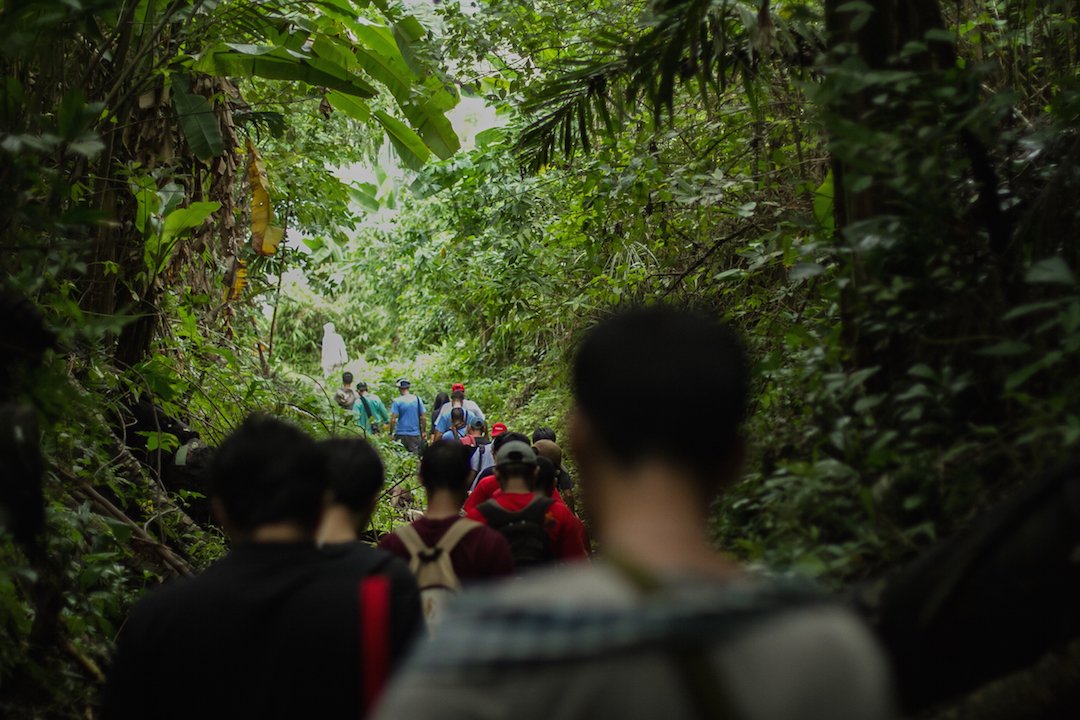 For 12 days of Christmas last month, around 30 Asian Jesuit scholastics moved around Leyte, Philippines to meet people pulling their lives together in a disaster landscape. They also learned about risk management, which is clearly part of the new life strategy at the margins. Haiyan, the perfect storm, rode for six days undisturbed across half the Pacific Ocean before landfall at 5:00 am on 8 November 2013. It turned town lands and country into rubble with about 7,000 dead and a million displaced. It was a war fought in one morning with only a confused evacuation of civilians as defense.

Since then people have tried to move away from living on the shoreline and slopes, but the poor cannot afford safe land and there are also very limited areas that can be considered safe land. People and assisting organizations have built housing that won’t survive such a major typhoon while the majority of evacuation centers are still multi-purpose structures, with schools as the most common sanctuary. Though we dream of “building back better,” a shared agenda of the Sendai meeting1 and all the UN literature, many are exhausted with doing and reading housing site and evacuation center reviews and reports, mostly sharing similar limitations and needs.

Locally, people are re-building makeshift economies, equally trounced and marginalized by the global economy. Substandard materials are but a tiny aspect of how integral and abusive a global economy is of local circumstance. There are picturesque local “successes” on the one hand but nationally we continue to sustain a gross poverty.

Painfully beautiful in the rubble and restructure of life, we always meet people who are grateful. The human spirit finds a path, faith lights the way, people who hope lead humbly on. Many of the scholastics never thought they would find such radiant hope as the widow who spoke of her children moving forward.

A few days prior to this Scholastics and Brothers Circle workshop of the Jesuit Conference Asia Pacific, I came from the COP21 Paris meeting, where communities who suffer from climate change are finally recognized. Climate finance needs a US$ 100 billion budget, 50 percent of which is designed for adaptation of affected communities down the road, but lacks predication as to how it will be provided. To translate what was said and where we are is measured in five, ten, fifteen and twenty years. These are very small steps when we measure the 21 years so far of government presence that has yet to act.

The coverage and focus of the world media during the meetings in Paris did highlight the reality of the formidable challenge that world leaders were called in person to address, and the doubts or scepticisms of the threat were not in their minds. Many were better informed by this global and public display of concern, way beyond those who marched in cities across the world, and are now recognizing that they, not just governments, must respond.

The real threat revealed is unbridled global corporatism and civil society has identified this in many ways with the giants. One of these giants, the transnational oil BP Amoco greenwashed its image in 2000 as “Beyond Petroleum” and committed to invest in and research clean energy, but this is not evident in its portfolio. The growing greed for fossil fuels includes the oil spill in the Gulf of Mexico where the risk assessments previously reported massive shortcomings – greed being the lack of any real consideration for anything ‘that is not mine’ and ‘to have everything now.’

Oil, particularly fracking, and coal were discussed in many side meetings as skewing the projected agenda for a better climate. Air and sea travel were not accounted for in the calculations. There are many factors that will still push us beyond the 1.5 degrees rise above pre-industrial temperatures. The stories of Volkswagen cheating on carbon regulations were rife. The words of the Holy Father on “technocracy” were ringing in our ears.

Many of the civil society in Paris were concerned about the small print. Are peoples’ rights safeguarded in the climate change-related actions? Human rights are essential in the struggle for food security in the face of corporate food production and distribution. References to food security in key articles on mitigation and finance have been removed. Land use – and we recall the continuing burning of large forest areas of the Congo Basin, the Amazon, and Indonesia – is not discussed. By removing land use from the text and going back to carbon sinks and reservoirs, whole communities, biodiversity, and food rights are left out.

Ecclesial networks such as the Red Eclesial PanAmazónica (REPAM)  for the Amazon and Réseau Ecclésial pour le Bassin du Congo (REBAC) are emerging as stronger voices for “care for the vulnerable and an integral ecology”2 that speaks 31 times of “ecology” and 59 times of the “poor.”

The COP 21 meeting started with floods in Chennai, southern India and by week two, the floods in northern England  followed. In Chennai, around 350 people died, there was a newspaper reference but the world spun on. It is a totally different situation where 150 people died in the Paris shooting a few weeks before and the world stopped to confront the enemy without. Yet the “enemy within” corporate and personal also has to be addressed. Our lifestyles that drive and are driven by a consumerism of what we eat and clothe ourselves and where we know not the origins or conditions of the land and people involved, need to be faced in a positive dynamic of living anew.

Questions of “well what happened in Paris?” are exhaustive. The critical lists are there, the advances and the losses; but most poignant is the question of action. Humanity in its limited political form dragged through with limited achievement, lacking acceleration and corporate engagement. Success is relative and short-lived for 195 countries if there is no collective national change by each country. The best that could be done was to commit to take it home and see what the commitments add up to. The list of most vulnerable countries was 20 when they started and grew to 43 by the end – at least there is awareness.

This calls for public engagement, commitment, and transparency with action on the agenda. Intended Nationally Determined Commitments have to be checked off. I still have not sorted out how the Philippines is going to put together a 70% reduction in carbon output by 2020 with a commitment to a 70% coal-based energy by 2030. I just hope the companies are not going to soak up the money we need for social adaptation that is ongoing, and do an easy cash transfer to carbon-free energy business. The attitude that we (the Philippines) produce so little carbon and therefore we can splurge like this, shows little sobriety or concern.

I have few illusions as I write this that it is going to be all right as with the end of a fairy tale. As with many struggling with the urgency of matters, if the next generations are not our priority then we have lost all sense of purpose. The struggle is massive, we can’t afford to simply topple the medieval castles of power, but as the rich ignore the call for basic redistribution, we will enter other Dark Ages.

What has to be done? Tighten up and lighten up lifestyle and yes we need hope, not disillusionment. “The world is charged with the grandeur of God… It gathers to a greatness, like the ooze of oil Crushed.”3 If “the glory of God is man fully alive”4 who takes in the grandeur of every molecule of life, “where the divine and the human meet in the slightest detail in the seamless garment of God’s creation, in the last speck of dust of our planet”5 and lives fully through creation and with neighbour, we can get a new take on what it is to live together.

Another myth debunked is that this is a struggle over riches, not overpopulation, as the poorest people are consuming so little of the world’s resources, with a UN report concluding that “even if zero population growth were achieved, that would barely touch the climate problem.”6

The battles within our own conversion in life are not with obsessions, but to live life with meaningful participation and the changes we are willing to make in our own lives deep within. These include sharing sustainable ways of living, managing consumption and waste, participating in communities of practices using agroecology and community-based renewable energy production, and responding to the challenges at the political level.

We also need to support different food producers, indigenous communities, workers, and women so they can organise and negotiate more. We need civil engagement for policy changes such as regulating business to meet human rights obligations and demanding transparency of transnational corporations and global trade agreements. Can we even ask about arms production and supply? All these are part of an integral ecology.

The Holy Father echoes the call to praise, reverence, and serve God – and the serve is service of neighbour and care of creation. Two-thirds of the transformation is within a spirituality that leads to a lifestyle and a way with people and creation. We start with praise itself, a gift from God that can so easily be sought through creation. Reverence – what do we reverence but Christ in our lives? Then the next phase is so much easier.