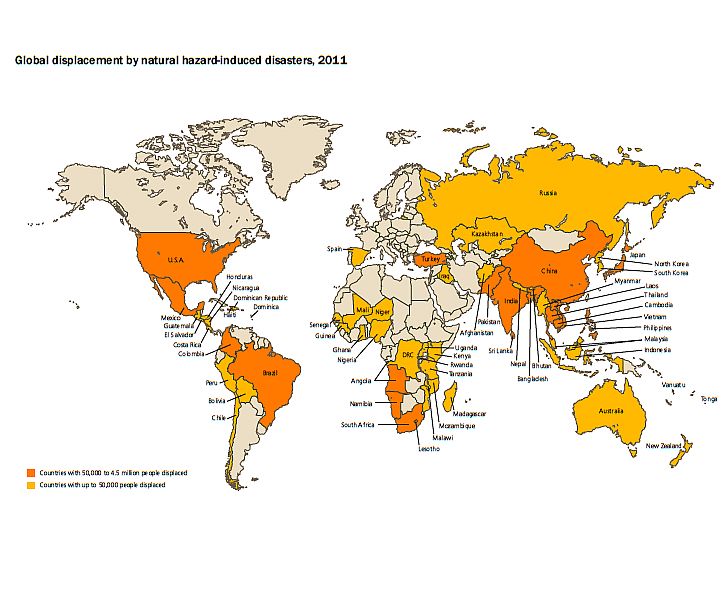 “Over a million people have lost their lives since Rio ‘92 in disasters… 4.4 billion have been displaced, most internally…,” remarks Manuel Bessler of the Swiss Humanitarian Aid.  Asia’s highest displacement last year was in China due to monsoon flooding according to Elisabeth Rasmusson of the Norwegian Refugee Council, as she presented Global Estimates for 2011 from the Internal Displacement Monitoring Centre.  In Sri Lanka, the plight of people affected by flooding was compounded by the vulnerability of being caught in conflict; 3% of the total population was affected and was the highest proportion of a population to be displaced.

Local communities need greater resilience – that is clear.  There is a need to ensure durable solutions through development planning, and ensure long-term commitment and collaborative work.  Second is the need to address the gaps in the knowledge; there are no adequate figures to reflect people caught in environmental traps or in slow-moving events like droughts and degradation.

Affecting the Nile Delta, Dr Moustafa Hussein Kamel, Egyptian Minister of State for Environmental Affairs, said of climate change: there is serious impact of higher temperatures for the area, adverse shortage of water and increased salination, along with sea level rise.  This is affecting especially the coastal areas and the delta, where 40% of the population live and impact agriculture and fisheries with great loss of livelihood.  Vulnerability to secondary disasters only increases with the insecurity of the local population, reducing resilience.

Climate change is leading to more extreme events and affecting new places affected, with livelihoods becoming more susceptible.  The need is to reduce the most destructive aspects of disaster events, and poor government adds to the problem, said Heikki Holmås, Minister of International Development in Norway.

Seethapathy Chander, Principal Director, Office of Information Systems and Technology, Asian Development Bank (ADB) spoke of policy issues as the way to move.  Asia is the region with the highest disasters and more people and assets are being located in areas of high risk.  There is a 114% increase of people living in flood zones, he said.  Risk has grown at 15%, faster that wealth.  Only 3% of loss is insured in Asia and the losses are clearly higher than what would be paid in premium.

ADB has a problem in its focus to reduce disaster; of the 2.5 billion dollars invested, 96% is in mitigation and 4% on adaptation.  Why?  Mr. Chander says it is due to lack of policy and poor linkage of adaptation measures with science.  ADB is now looking at more detailed country assessments.  Global figures for disaster in the last year are shocking and every local incident is painful to cope with.  Over 800 people died in Rio mudslides last year and so the need to change is evident everywhere.  Policy and adaptation may be necessary, but land allocation for those at risk or even recovering from disaster is the one thing not happening and is the major failure of governments as this never becomes the priority.

How does this relate specifically to the meetings in Rio?  It does not, that is the point; displacement and migration are not in the draft document.  The document is silent on migration and displacement, how is it they are not part of sustainability?  Mr Holmås thinks it could be too late to get any change in document, but people must move on, address reality, change critically from below, and find such partners as those of the panel today working from above.

All countries with at least 100,000 people displaced during the year are listed.