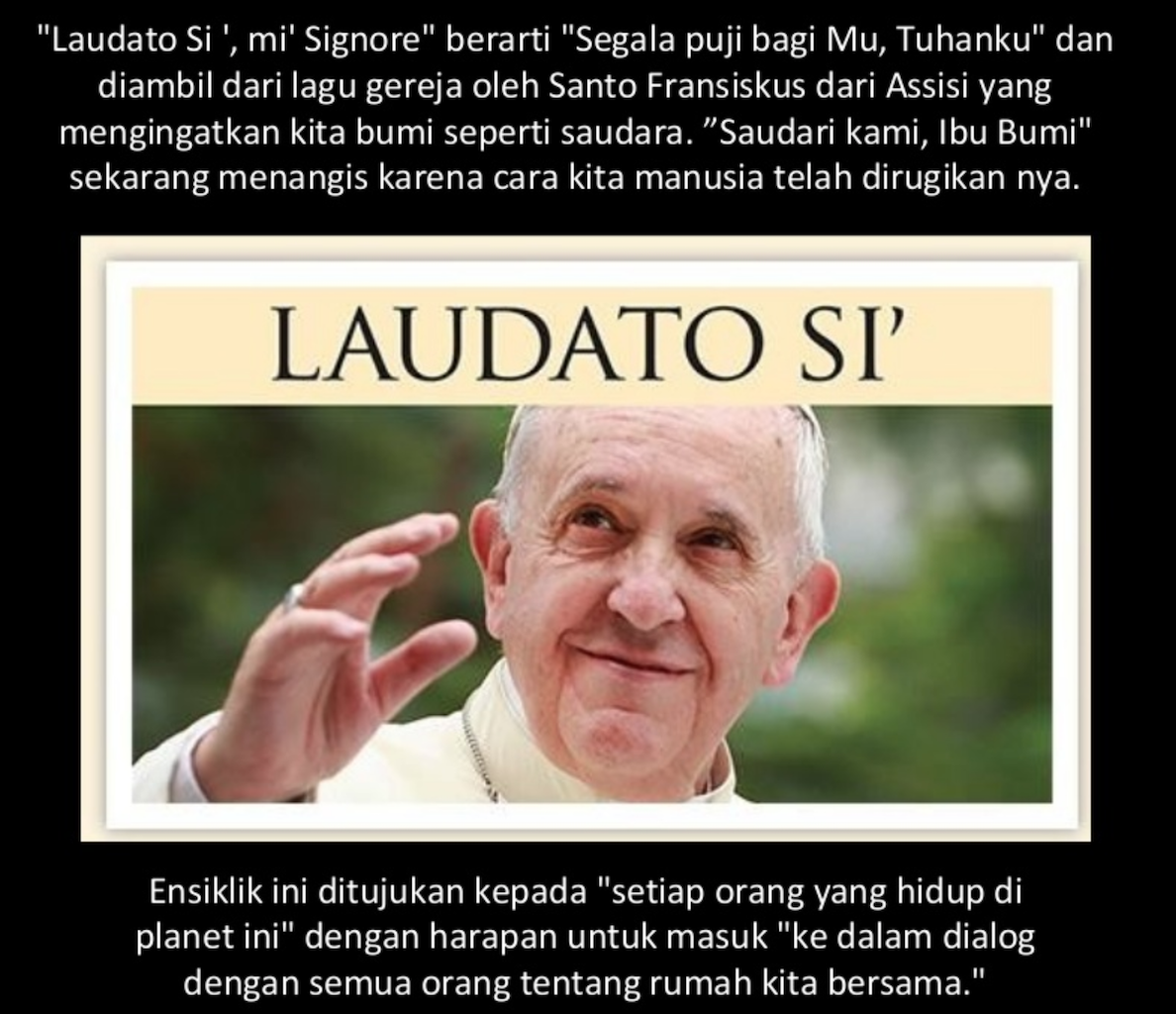 The Ascension of Jesus Christ has two meanings. On the one hand, it is a heartwarming farewell. On the other, it is a moment for missioning. Besides looking up towards the heavens, we are also invited to strengthen the steps we take on earth.

After Jesus rose, most of his disciples probably hoped that he would stay with them forever. However, their hopes could not be fulfilled. Once again, the Eleven had to part with their Master.

Before being lifted into heaven and covered in clouds, Jesus sent the disciples with their final mission, “Go, make disciples of all nations … teach them to observe all that I have commanded you.” (Matt 28: 19-20) Therefore, all that Jesus did on earth and his work of salvation does not end with his ascension.

Laudato Si’ (LS), the encyclical written by Pope Francis five years ago, can be seen as an effort to reiterate Jesus’ message for the disciples two millennia ago. More than just a teaching to Catholics, the Pope’s message is a universal cry for all people to work together in seriously tackling the massive ecological crisis.

The appeal of Laudato Si’

Usually, the discourse on ecology and the environment is centered on science, politics, and economics. With Laudato Si’, environmental issues explicitly and systematically began to be discussed within the perspectives of faith.

This prophetic call from the leader of the Catholic Church spoke about how religious and faithful people should behave towards nature. To this day, many forums are created to discuss and implement Laudato Si’ in various programs.

In his encyclical, the Pope reviews various themes, such as integral ecology, consumerism, water conservation, food preservation, biodiversity loss, the dangers of technological manipulation, and many more. As a document of Church social teaching, Laudato Si’ also emphasizes how the main victims of environmental degradation are those who are the poorest and most marginalized.

From the start, the Pope saw the ecological problems as a tragic result of uncontrolled human activity. “This sister now cries out to us because of the harm we have inflicted on her by our irresponsible use and abuse of the goods with which God has endowed her,” wrote the Pope. (LS 2)

So, the main target of programs to care for the environment is not to change nature itself. However, in the first place, their aim is on changing the attitudes and paradigms of human beings, both as individuals and in groups. This is what the Pope meant by “ecological conversion.”

Symbolically, in my opinion, ecological sin can be compared to the story of a frog in a pot filled with water. Underneath the pot, a fire is lit. The frog’s nervous system is unable to feel gradual changes in water temperature. It will die slowly as the water boils and be cooked in the pot. The same goes for ecological sin.

Ecological sins do not erode our feelings. If we compare it with other kinds of sin, such as stealing, which can make a person’s heart feel uncomfortable, ecological sins are more passive. We can treat nature, plants, animals badly, dispose of trash at will, and waste energy sources. However, we may find it difficult or even unable to feel its affective impact on us, let alone make us feel sinful.

The effects of ecological sins also seem too slow to be experienced directly. Melting polar ice caps, the sinking of the small islands in Oceania, extinction of various animal and plant species – everything happens in silence, far from any camera to capture. Therefore, one can still feel “safe” even though we notice that the statistics and research results about the environment are always in a catastrophic tone.

In addition, people or objects that feel the effects of ecological sin often do not know the source of the cause. It was the same as the frog who did not know that the source of his death was fire under the pot. This ignorance can foster the lack of care towards the environment.

The lack of awareness of ecological sins can also be born from cognitive rationalizations. The human mind, consciously or not, can make false reasons to stop caring about efforts to preserve the environment. According to Paul Slovic’s psychological theory, this is called “pseudoinefficacy.”(Editor’s note: From the Arithmetic of Compassion, “the concept of  pseudoinefficacy refers to the idea that people are less willing to help one person when they are made aware of the broader scope of people in need that they are not helping.”)

For example, there is doubt that changes in personal lifestyle can repair the damage to nature. Many people consider the earth to be too big and small-scale human actions will not have any impact on the earth. One can think “There are still many who buy bottled water. Why should I bother to bring my own drinking bottle?” With that rationalization, someone does not feel guilty.

Perhaps, this pseudoinefficacy is a mask of someone’s fear when they have to change lifestyles that bring damage to the environment but howeverbring themcomfort. Having to take public transportation means leaving the comfort of a private car. Having to separate waste means to provide time to get down and dirty. Having to turn off the air conditioner means you will feel hot all day.

On 16 to 24 May 2020, Pope Francis invitesCatholics all over the world to celebrate Laudato Si’ Week. This movement is a global campaign to commemorate the five-year publication of the encyclical. The theme is “Everything is connected.”

This is the right moment to refresh our ecological awareness and take time to reflect on the condition of Mother Earth. It’s time to confess our ecological sins that have been neglected at the personal, communal, institutional, and national levels.

It’s time to start simple renewal actions and break down all forms of selfishness and ignorance. We always hope that the renewed personal lifestyle and concrete everyday actions can inspire greater actions. It is important to realize that all of this requires personal sacrifice, but the sacrifice is worthy of a better future for Mother Earth.

In the face of the challenges of climate change, fear, anxiety and helplessness are normal. But, Pope Francis wrote, “Rather than a problem to be solved, the world is a joyful mystery to be contemplated with gladness and praise.”(LS 12)

From there we are reminded that the main foundation of the effort to answer the challenge of the climate crisis is a joyful heart, filled with consolation. Therefore, it is very important to highlight the joyful sides of an ecology program. It is important thateveryone isin touch with the beautiful sides of nature. It can make someone fall in love with it and consequently want to look after it.

No matter how great the benefits, an ecological program will only be a burdensome project if it is not done with a joyful heart. Joy will strengthen ongoing commitment and such joy always comes from the experience of conversion.

Conversion is not just a time to confess our sins. In Christian teaching, conversion is first of all a time to experience God’s unconditional love amidst our fragility and shortcomings. The experience of being loved and forgiven by God is a source of strength to renew and reconcile ourselves with creation. 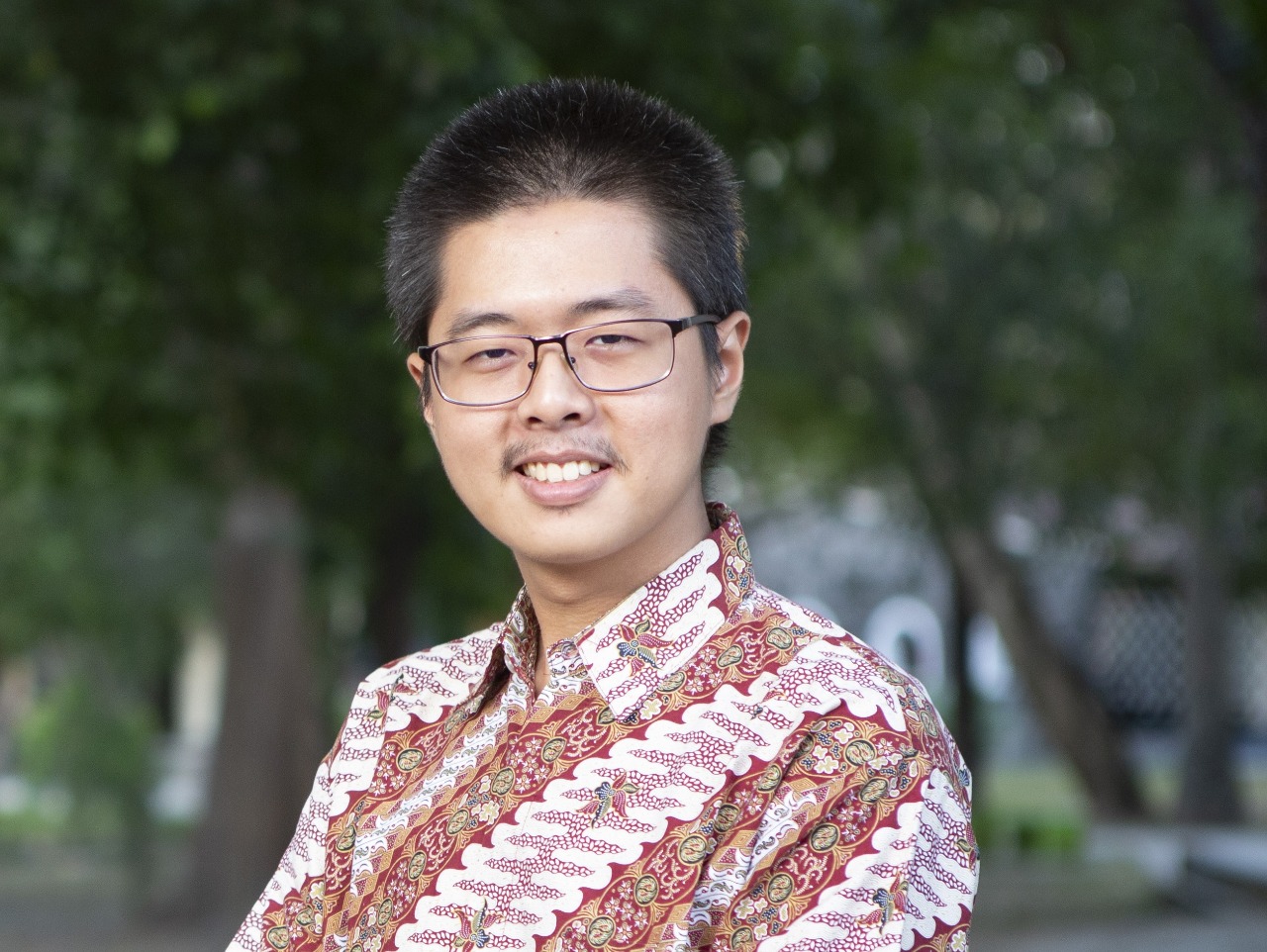 God’s mercy for us also needs to be demonstrated through our mercy for nature. “The cries of the earth and the cries of the poor cannot continue,” stressed the Pope in his video message of Laudato Si’ Week.

Frederick Ray Popo is a Jesuit scholastic studying philosophy at Sekolah Tinggi Filsafat Driyarkara in Jakarta, Indonesia. This reflection is a translation from the original which was published in Kompas.