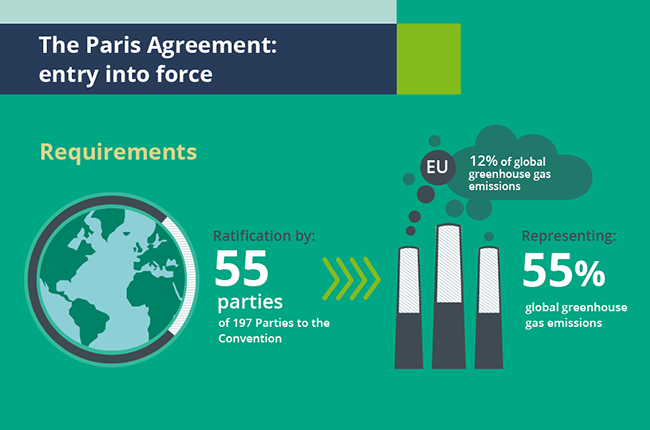 Members of the European Parliament (MEPs) gave their consent to the ratification of the Paris Agreement on 4 October 2016, a significant move to enter into force the first global pact against global warming.  A few days before, on 30 September, the EU environment ministers agreed to ratify the Agreement through a process that enabled individual countries to send their ratifications directly to the UN.

Outgoing UN Secretary-General Ban Ki-moon implored the European Parliament (EP) before the vote, “In the name of humanity and for the sake of future generations, I encourage you to support the speedy ratification of the Paris Agreement.”  The Slovak Minister for the Environment and president of the Council, László Sólymos said: “Today is an important day not only for our action on climate but also for the unity we have demonstrated.  This means that the EU and its member states will add their weight to trigger the entry into force of the Paris Agreement.  Europe has shown leadership in Paris and will participate in its implementation in Marrakesh.  Action for climate remains essential for livelihood of our planet and future generations.”

On 12 December 2015, 195 countries and the EU pledged at the climate conference in Paris (COP21) to stop global rise in temperature “far below 2 degrees C” and to support economically the most vulnerable countries to the effects of global warming.  For the entry into force of the agreement, which will replace the current Kyoto Protocol, two requirements are needed, in accordance with Article 21 of the Paris Agreement: That 55 Parties representing at least 55% of global emissions must join.

While the first condition was met because 81 Parties already ratified the agreement, the consent of the EP allows the second requirement to be met too, thus triggering the entry into force by an overwhelming majority of 610 votes in favor, to 38 votes against and 31 abstentions.  The Agreement reached 60% of the global emissions under the ratification process.

With the present level of ratification, both the number of parties and the volume of global emissions the agreement will effectively enter into force during the climate conference in Marrakech (COP22) on 4 November 2016, which is 30 days after the vote in the EP.

As a result, the first session of the Conference of the Parties serving as the meeting of the Parties to the Paris Agreement will take place in Marrakech in conjunction with COP 22 and CMP 12.

In sectors such as buildings and road transport, many of the important decisions will be taken at Member State level.  The European Commission Factsheet on the Commission’s proposal on binding greenhouse gas emission reductions for Member States (2021-2030) has policies and measures to lower emissions potentially.  These include traffic management, shifts away from carbon-based transport, taxation regimes, the promotion of public transport, biofuels, urban and transport planning, improved energy performance standards for buildings, more efficient and less carbon intensive heating systems, and renewable energy for heating.

The European Union (EU) opted to accelerate the Paris agreement ratification without waiting for the fulfillment by all the Member States at the national level, an original solution so as not to delay the entry of the Agreement into force.  Traditionally, it was expected that all Member States individually ratify the agreements, but in this case, the fear that the entry into force will be delayed made the EU choose block ratification.

How countries joined the Paris Agreement

As presented by the World Resources Institute’s FAQs About How the Paris Agreement Enters Into Force, the Paris Agreement was opened for signature at the UN in New York from 22 April 2016 to 21 April 2017.  Signing is important because it indicates a commitment by a country to refrain from acts that would defeat the object and purpose of the Agreement.

After signing, Parties then formally joined the Paris Agreement by depositing one of several types of instruments with the Secretary-General to the UN – instruments of “ratification, acceptance or approval.”  There was no time limit for countries in submitting these instruments.  A country might deposit its instrument of ratification, acceptance or approval on the same day it signed, or submitted it separately much later.  If a country did not sign during the one-year timeframe, it can join the Paris Agreement later by submitting an instrument of “accession.”

A country’s ability to join the agreement is conditional on obtaining the required domestic approval for joining the Agreement.  The nature of this domestic approval depends on each individual country’s national constitution and legal framework.  For example, in Australia, the only requirement is notification and introduction of the agreement in Parliament, whereas in Mexico, the consent of the Senate is also required.  In the United States, international agreements can be joined in a number of different ways, including through the authority of the President, particularly when an agreement is consistent with existing US law.

In addition to receiving domestic approval to join the Paris Agreement, some countries may also need to enact national legislation to implement the Agreement.  Whether a country needs to do this will depend on the nature of its existing legislation and regulatory framework.

When a country fulfills its necessary domestic processes, it can deposit its instrument of “ratification, acceptance or approval” indicating its consent to be bound by the agreement.”