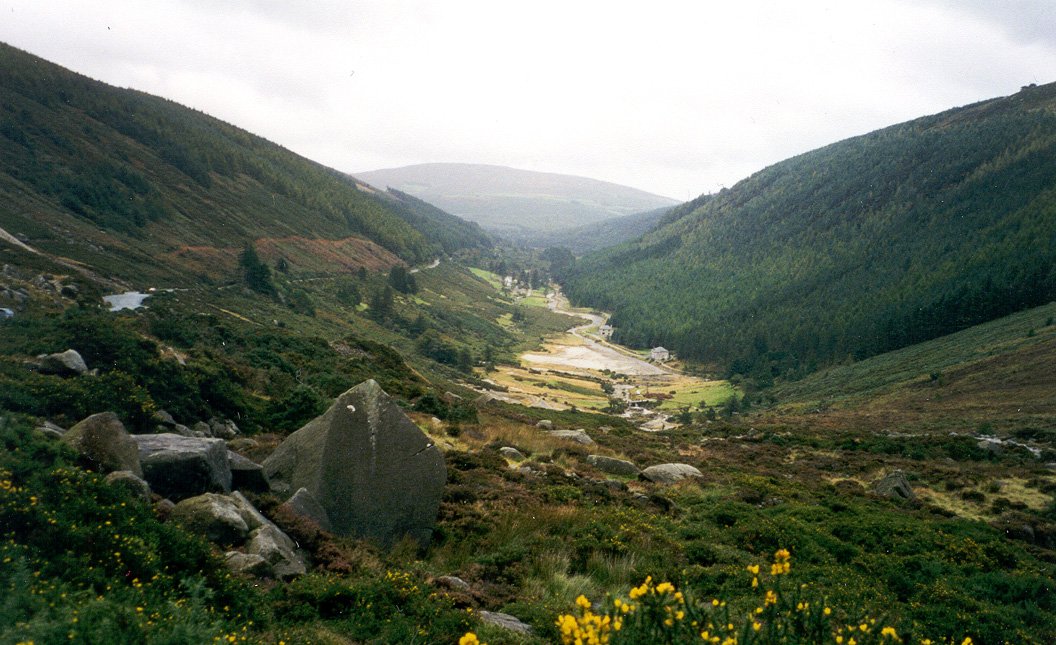 I come from Glendalough, County Wicklow, located in the east of Ireland.  It’s a place of deep monastic tradition – Saint Kevin settled here in the 6th century – and incredible natural beauty, the valley itself carved out over time by glacial and fluvial dynamics and now home to extensive oak forests dating from the 1800s.

I like to believe that time spent in this place of rich spiritual and ecological value instilled in me, as a young adult, a deep sense of the importance of the processes of nature, and our reliance on these processes for our own functioning, sense of wellbeing, and perspective on Earth.  Indeed, these key formation years provided a catalyst for wanting to be of service to care for the natural environment – though it took some time to make this realisation.

When a love of nature is so deeply engrained and intertwined within your own personal habitus, when you are aware of how necessary a healthy natural environment is for our very functioning here on Earth, and when you are aware of the importance of sustaining this interconnected relationship for future generations, it is impossible to turn away when the Cry of the Earth is louder than ever.

Of course, in recent decades, the interconnected relationship between the natural environmental and human activities has emerged as a significant element of discussion on social justice issues; however this year is of particular importance as the urgency for action on climate change and environmental degradation is so apparent.

Pope Francis’ encyclical Laudato si’ has generated much international focus and debate on our relationship with the natural environment, and the implications for social justice issues.  The recently established Sustainable Development Goals signal a hopeful message of global commitment to ensure environmental protection, as well as eradicate poverty, and end injustice.  And all eyes will be on Paris this December, when world leaders will meet as part of the upcoming UN Climate Change Conference, with the aim of achieving a legally binding and universal agreement on reducing greenhouse gas emissions and preventing dangerous climate change levels.

I am thus very happy to come to this role in 2015 as the new Environmental Justice Officer of the Jesuit Centre for Faith and Justice (JCFJ) that is actively responding to the greatest challenge of our age, climate change and environmental degradation.  A key objective of the Centre is to promote social justice by fostering an understanding of public issues through social analysis, reflection, and advocacy.

The establishment of this new role is of timely significance and comes from a recent review of how care of the environment and awareness of environmental justice issues might be better fostered through research and policy-related activities.

Recently, the Centre produced an issue of its journal Working Notes (Issue 77) specifically on the theme “Caring for our Common Home” that brings together perspectives on ecological economics and the upcoming UN Climate Change Conference in Paris (COP21), reports on the ecological activities of church communities in Ireland, and the role that social enterprises can play in responding to environmental issues.

This role will be very much guided by Pope Francis’ recent encyclical and it will seek to critically engage in policy analysis and reflection from a social and socio-theological perspective.  I will also engage in public debate on environmental justice issues, while adding value to existing initiatives here in Ireland, and international activities on areas of environmental concern such as Ecojesuit.

Despite the increasing global momentum on tackling climate change and environmental degradation, a key struggle in Ireland involves awakening a sense of urgency among political leaders.  Europe 2020 in Ireland  released a staff working document, Country Report Ireland 2015 including an in-Depth Review on the prevention and correction of macroeconomic imbalances, that criticised the country for having “insufficient” policies on climate.

Ireland’s Greenhouse Gas Emission Projections 2012-2030 by the Environmental Protection Agency reports that the economic recession which hit in 2008 resulted in a decrease in carbon emissions, but the current economic recovery also means that Ireland is on course to miss its 2020 emission reduction targets, according to the 2014 study by the European Environmental Agency, and for which the Environmental Pillar, a network of 28 national environmental NGOs in Ireland, is thus calling on government “to end its disjointed approach to emissions targets and put Ireland at the forefront of climate change action.”

It is only very recently that Ireland started to make progress on a solid policy on climate change, with the establishment of the Climate Action and Low Carbon Development Bill that places climate policy on a statutory footing for the first time in Ireland, just less than two months before climate negotiations take place in Paris.  However, there still remains a lack of urgency around the development of mitigation and adaptation plans (including the development of the renewable sector and shifting to sustainable transport), the establishment of emission reduction targets for 2050, and Ireland’s commitment to assisting developing countries follow a low-carbon trajectory.

Looking ahead, the Irish Government sees itself as being a special case that deserves less stringent 2030 targets on emission reductions, primarily because of the role of the agricultural sector in the Irish economy.  Agriculture currently accounts for approximately 33% of Ireland’s greenhouse gas emissions and plans are in place for the sector to expand significantly, as shared in the report Projected Economic Impacts of Climate Change on Irish Agriculture by Dr Stephen Flood and commissioned on behalf of Stop Climate Chaos, a civil society organization.  But this has negative implications not only for our emission levels, but also for Ireland’s rich biological diversity.

The prioritisation of national economic interests over the common good reflects a lack of government commitment to seriously tackle climate change, and resulting social justice issues.  This lack of political will and leadership limits the capacity for Irish society to prevent and adapt to climate change, and to become more aware of the harmful implications of some of our everyday actions.  It also has implications for future generations.

It is very helpful that civil society organisations play an active role in lobbying political change and raising public awareness.  Indeed, without pressure from civil society organisations, the government’s current policy position on climate change would have been much weaker – though in line with recommendations from Laudato si’ (179, 181), increasing pressure is needed to ensure a more sufficient, integrated and holistic long-term approach that has at its core, the common good and the rights of the environment.

Essentially, a mind shift is required amongst our leaders and across society, and certainly in Ireland, increased mobilisation of public and civic institutions is required to influence political change.

While drawing on examples from Ireland, I take much encouragement from the growing number of events and seminars organised by communities, on communicating Laudato si’ and raising awareness on COP21 and climate action.

There are massive challenges to tackling the greatest challenge of our age, but I believe that understanding the socio-ecological challenges we face from a spiritual perspective can help us embrace these challenges as an opportunity to realise the true potential of what it means to be human within the greater story of the Universe.  This isn’t a question about the Earth, this is a question about us, and how we relate to each other and our planetary home. The call to action now is an opportunity for societal transformation to a more just and equal global society.

Going forward in my role as environmental justice officer in the Centre, I am interested in exploring a number of key questions, such as:

What are the policy implications of Laudato si’ and how can we create “a new dialogue about how we are shaping the future of our planet”, a “conversation which includes everyone”? (LS 14)

What must change in current governance and civil society structures to allow for these conversations to take place, to allow for “a new and universal solidarity”? (LS 14)

What needs to change to encourage and facilitate control, by citizens, of political power which Pope Francis believes is necessary to prevent environmental damage? (LS 179)

Beyond providing information and raising awareness, what triggers are required to motivate civil society into transforming harmful lifestyle choices into habits that are more in keeping with the Earth’s planetary boundaries?

How can we expand the reach of Laudato si’ beyond the ears of faith-based congregations, so that an understanding of the moral imperative of addressing climate change and environmental degradation can reach a larger audience?

How can we ensure the continued protection of biodiversity and as Pope Francis has reminded us, the rights of the environment in our efforts to combat the implications of climate change as we transition to a low carbon society?

Finally, how can we encourage our leaders to move beyond national interests to acknowledge a sense of collective responsibility towards action on climate change and environmental degradation?

2 thoughts on “The Jesuit Centre for Faith and Justice, Ireland: Responding to the greatest challenge of our age”