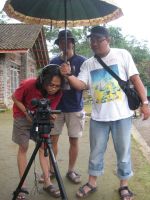 It took me awhile before I could recall the moment I realized I wanted to take videos and capture different events in people’s lives.

When Pedro Walpole asked me, “when was that moment you realized that you wanted to do video documentation and be part of media and communications,” … I stammered. All I could say was, it felt good holding a camera for the first time. Even before that, I had a dream of wanting to film and inspire people, but knowing what was that defining moment, … I stopped and realized I must discover it anew.

It is through feelings that the drama unfolds. If we are going to reflect, we need to start with feelings.

It was during the end of my novitiate years when I had my first chance to hold a camera. I took video of my classmates and our lectures about vows. It was mainly a feeling of curiosity on my part as I downloaded the file and started to edit it. It was a good feeling playing around with the technology. I felt happy completing the video and gave it to my classmates as a souvenir of our class.

Sometimes, we tend to forget those moments, the defining moment that shapes our dreams in life. After giving much reflection, we then realized the feelings are there and not buried but still we find it difficult to recognize how our dreams and desires are formed.

While in the novitiate when I saw the film, the Mission, the part when Robert de Niro’s (Character: Rodrigo Mendoza) sin was “forgiven” by one Guaraní member cutting the rope of his burden, I was moved. Symbolically, it shows that Mendoza’s sin for killing his brother was forgiven; consequently, he found refuge in God and sought to serve Him. After seeing this, I told myself, I want to make a film that would also move people and by which they would learn the values of life. My dream is to make a religious film that would change people’s views and realised that God is present.

Since then, filming has become my passion.

A new challenge unfolds as I took this new endeavour of documenting the “scholastics engagement” at Bogoran and Buntu in Wonosobo, Central Java. However, there is a question on my part as to how do I relate spirituality and ecology? How would I reflect Jesuit Spirituality in the documentary film yet highlight people’s experiences and relations with the land? How would I express God in this experience?

If we are going to reflect, we need to start with feelings. This is our expression and ways to move forward – to obtain actual grounded concepts and rooted emotions.

Emotion and language are the most crucial in giving people the experience of forest to God. We could all commune with community and nature, but where is God in that commune? This is what we are lacking in our society thus this is the role of the scholastics in expressing the feeling of finding God in all things.

It is through feelings that the drama unfolds. If we are going to reflect, we need to start with feelings. This is our expression and ways to move forward – to obtain actual grounded concepts and rooted emotions.

With media, I could affect many people. I could communicate the spiritual exercises through media. To be effective means to serve – through media. There is something I experienced in my life and I could influence other’s life too. The first video experience during my novitiate years was an effort to express gratitude to my batch mates as we were together for two years. It is to give something of myself and reflection of today’s Gospel.

To know the defining moment in (our) life makes it easier to bring people to new experiences. As I struggle to live my own unique vocation, my capacity as an artist needs to be rooted in the fire that lives in my heart, … “I dream, I act (through filming), I am satisfied.”

Eko is one of the directors and editors of the “Albasian Haj”. A documentary film about the reflection of the scholastics (Indonesian Province) on the traditional systems of multi-cropping that sustains the upland soils and people’s forests, locally known as “hutan rakyat”.