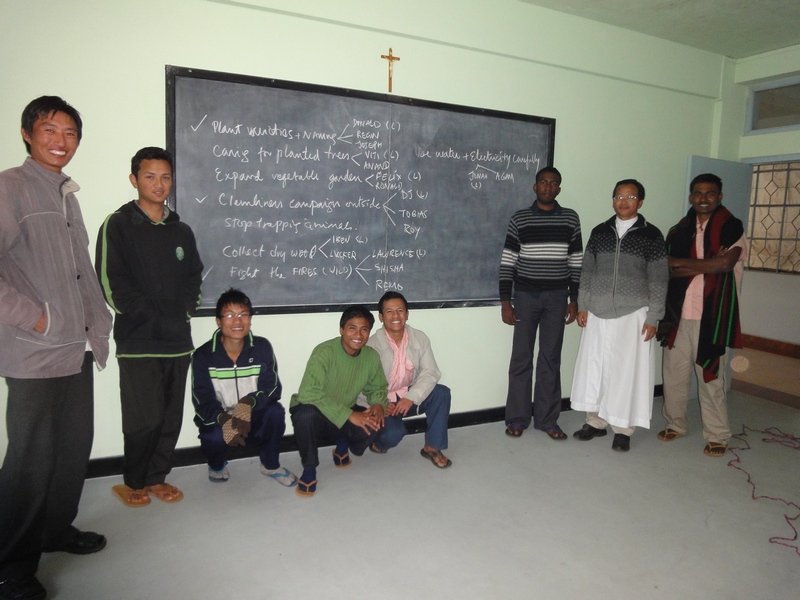 By the novices of the Shillong novitiate


In India, ‘Sacred Groves’ are forest fragments of varying sizes, which are communally protected and which usually have a significant religious connotation for the protecting community. Hunting and logging are strictly prohibited within these zones. Sacred Groves are considered ecologically important concentrations of biodiversity.

Whereas other Indian regions like e.g. Himachal Pradesh possess over more than 5,000 such Sacred Groves, the state of Meghalaya has only about 50, and these struggling to survive. It was in this context that the Jesuits developed the idea of converting their novitiate in Shillong, the capital of the state of Meghalaya, into a Sacred Grove dedicated to the conservation of biodiversity.

The Jesuit property covers an area of 80 acres; it has a sheer drop of a thousand feet on one side and meandering meadows on the other side. Sholas and pine trees characterize the precincts; a gurgling stream passes through to the reservoir at the bottom of the campus.

Wild elephant-grass and horse-grass grew in between the patches of pine trees that filled up the hills. The proposed bio-reserve had the look of a prairie. Richard Jarain SJ, an engineer in Life Sciences, suggested the planting of indigenous trees in all these patches of land.

Along with the novices, Jarain used some of the open spaces to plant rice, ginger, beans and yams. The soil looked dark and fertile; it had a high content of sand and gravel, which made it softer and easier for plantations like ginger. The irrigation was done with the percolated water that came down from the slopes to form natural ponds.

“A few barrier dams could take care of the water requirements of the sacred grove,” said Charles D’Souza SJ, a veteran with much experience of large plantations. The word “water” meant everything for the people of Meghalaya. Since extreme weather events – possibly harbingers of progressive climate change – have affected the region, the once wettest spot on the planet, Chirapunji, dried up for months during this summer.

It was therefore suggested to lay pipes for 4-5 kilometres to draw water from a nearby mountain top – an idea however, which turned out to be too expensive. It seemed obvious that the solution for water conservation lay right in the property with its catchment ponds and barrier dams.

There were already some small natural fresh water ponds in the property which were home to plenty of frogs. Additionally, some “amoeba ponds”, spread around the natural rock formations on the lower part of the land, were constructed.

What concerned everybody was the forest fires in summer. Each year such fires were started by people who believe that a large amount of smoke would attract the rains. The fires usually consumed the tall grasslands along with the saplings which had naturally sprouted or planted during the torrential rains. There were fire-lines around the property, but anybody could hurl a lit up torch across these fire-breaks into the grasslands.

Jesuits Yan and Richard Jarain formed a persistent partnership in following up their dreams. Twenty-two novices formed a team to construct lanes and paths crisscrossing the pine forest. In addition, the officials of the Forest department were eager to lend a helping hand to plant indigenous trees in the campus.

One essential idea of this bio-reserve was that it should support all life forms. Whether they be birds, jackals or medicinal herbs, the novitiate’s Sacred Grove is a critical moment in the regeneration of the local biodiversity.

The novices formed teams to execute a joint action plan for 2011. One among other measures will be a cleanliness campaign at the picnic site outside the campus. It is furthermore necessary to combat the ongoing forest fires, to collect dry wood, to save water and electricity, to expand the organic garden. Finally, to stop the trapping of animals and birds remain major tasks, apart from planting varieties and naming trees. The Sacred Grove offers duties for every novice – and will also in the future require our attentiveness and stewardship.

This story may also viewed in Tarumitra’s Blog

One thought on “The Novitiate’s Greening: Biodiversity Conservation on a Jesuit property in India”