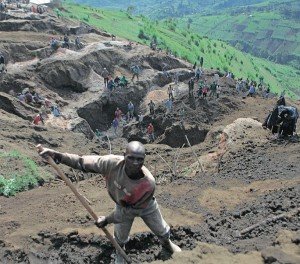 The phenomenon of artisanal mining in Katanga, in the southern area of the Democratic Republic of Congo (DRC), shows the impact of international economic growth of the last three decades on traditionally mining countries and regions like Katanga.

Artisanal mining refers to the activity characterized by the use of extraction techniques that are least intensive in both technology and capital. Artisanal mining can be formal or informal, legal or clandestine. Small mining, or small-scale mining, differs from artisanal mining in the more intensive use of technology and capital. Both artisanal and small mining are characterized by their great dynamism and diversity, which complicates to a great extent their descriptions and definitions.

The increased demand of minerals such as copper, cobalt, and uranium, together with the rising prices in international markets, helps to explain the growing phenomenon of artisanal mining in Katanga in the past 10 years. This happens in a national context characterized by the weakness of the democratic institutional character and the social tissue, and in an unstable economic-financial international environment that underwent a severe crisis since 2008.

In this complex, changing and uncertain context, it is necessary to look at the social action of the heterogeneous population of artisanal miners in the region of Katanga. Thus, we analyze the demands and struggles of this group when it comes to claiming their rights and suggesting proposals in relation to the access and control of mining resources.

As a first step, an interpretative look at the context, national and international, highlights both the “mining boom” associated with the international economy, and the complex swarm of international and regional geo-economic and political interests that are woven around the mining riches of the Congo for the past decade. International and national reports (among which include the Final Report of the UN Panel of Experts on the Illegal Exploitation of Natural Resources and other Forms of Wealth of the Democratic Republic of Congo, October 8, 2002 [S/2002/1146]) show the relation between resource exploitation and violence in DRC.

As a second step, we can point out two characteristics of the phenomenon of artisanal mining in Katanga: its huge size (in people involved in artisanal exploitation), and its insertion into a longer chain of commercialization, in which artisanal production ends up merging itself with the industrial production and, finally, exportation.

As a third step, the laws and policies related to artisanal mining extend from the 2002 Mining Code, and the mining policies, to the regulation and guidelines established in relation to the organization and direction of artisanal mining exploitation. Besides the legal framework, we want to underline the social action in the mining population of Katanga in relation to these rights, the challenges they face, the strategies they use, and the serious limitations they find to organize themselves and coordinate a social action.

Finally, we acknowledge the role of civil society and government organizations in relation to the accompaniment of these populations, as well as of the proposals to improve the governance of mining resources in the region of Katanga, with the prevailing concern on the phenomenon of artisanal mining and the risks of ignoring.

One thought on “The phenomenon of artisanal mining in Katanga, DRC”