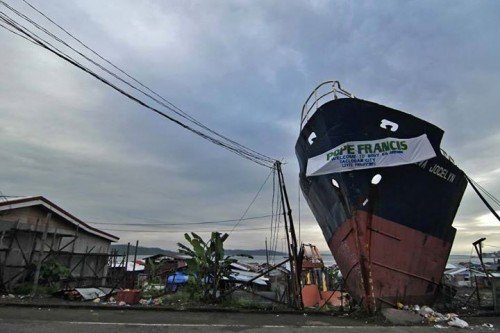 The visit of Pope Francis to the Philippines is a religious and deeply cultural occasion. Though he asked for no images of himself to be posted, the country is adorned with images of a man who inspires love, mercy and peace. The sentiment of the people and the hope he inspires combine in a deep act of social inclusion and the poor feel the presence of the God by being accessible to a man of God.

The Pope’s visit to Tacloban City brought his message of mercy and compassion that the rest of the world cannot give to the survivors of disasters. Tacloban embraces – actually celebrates – in regeneration and reconciliation all of the lives lost and human suffering since 23 years ago in the neighbouring city of Ormoc. Typhoon Thelma (Uring) in November 1991 set the norm for weather events in a changing world where thousands died, and more recently during Haiyan (Yolanda) in November 2013.

Typhoon Mekkhala (Amang) rose in the Pacific and wended its way to central Philippines, bringing the rains and winds that accompanied the Pope’s homily during the mass he celebrated at the Tacloban airport. Putting away his prepared homily, Pope Francis spoke to the crowd in Tacloban and opened what he felt in his heart, “When I saw from Rome the catastrophe, I felt that I had to be here. And on those very days, I decided to come here. I’m here to be with you – a little bit late, I have to say, but I’m here.”

The typhoon cut his visit short in Tacloban but it was an ambiguous sign that no doubt turned to a blessing as the Pope asks us to take responsibility for climate change and charges us with social and economic inclusion of the poor. The inclusion of the poor, their centrality, their integration in everything we do is a running commentary of Pope Francis wherever he went and whomever he spoke with during his five-day visit to the Philippines.

With renewed energy and focus in responding to post-disaster, there is a need for a fundamental re-adjustment in focusing of resources and expectations for the most critical areas. Typhoon Yolanda reveals the deprivation that existed for many decades and continues to do so despite all the pouring in of resources. While Pope Francis was able to see the renovated airport and Palo cathedral, and a new center for the poor, there is also the other reality of Tacloban with its refugee camps, bunkhouses, tent cities, and the continuing poverty worsened by Yolanda.

It is not simply a matter of relief and building houses. A much greater capacity is needed to build social and economic inclusion. Key elements that need understanding and action:

Land allocation for safe housing within reach of work and allowing for a family’s basic needs to be delivered remains the basic challenge, particularly for coastal towns and urban areas.

The incorporation of the poor as part of the formal economy ensures their social inclusion in the economic recovery. This inclusion is where the value of labour and practices of shared cropping are seen and where development is not simply a mechanization of agriculture and use of pesticides.

Local disaster risk reduction and management councils and networks should not only be focused on communicating messages of warning but must have the ability to animate adaptations on the ground. This task has been grossly assumed and only by further utilization of plans can the necessary changes be built in.

The development of a diversity of options for livelihood and enterprise that are practical, appropriate, and linked to markets is especially needed for recovering communities and local economies. Farming and fishing are not easy to go back to in a context of a degraded and resource-depleted land and seascape.

Global conversations and hope in 2015

Pope Francis helps us, as Christians and as people who love our land, to recognize the fundamental reconstruction needed between humans and creation. His messages show its movement through a contemporary creation where we are co-creators.

In this sense, transformative goals in 2015 are expected to be set during the UN Summit to adopt the post-2015 development agenda in New York, USA in September 2015, and the 21st session of the Conference of the Parties to the UN Framework Convention on Climate Change or Paris 2015 in Paris, France in December 2015.

Along this path of stepping-stones from Tacloban to Paris there is certainly one more – the expected encyclical on Ecology. In an interview by Associated Press aboard the papal plane on his way to the Philippines, the Pope said “he is convinced that global warming is ‘mostly’ man-made and that he hopes his upcoming encyclical on the environment will encourage negotiators at a climate change meeting in Paris to take ‘courageous’ decisions to protect God’s creation.”

The Church has certainly reawakened with gratitude and celebration and its responsibility to recognize that Genesis is part of the living Christian Message. There is now a Global Catholic Climate Movement launched during the visit of Pope Francis to the Philippines that sent a message of the commitment and hope to the Holy Father.

In this time, we learn we must embrace challenges of climate change, just one of the nine planetary boundaries we are in danger of destabilizing.

In that same interview, he “has spoken out frequently about the ‘culture of waste’ that has imperiled the environment.” Extreme weather conditions, such as typhoon Haiyan, are attributed to global warming and the Pope identifies our contribution to this global situation. “I don’t know if it (human activity) is the only cause, but mostly, in great part, it is man who has slapped nature in the face,” he said. “We have in a sense taken over nature.”

Pope Francis both challenges and inspires us to be accountable and active in our reconciliation with creation as he brings together Earth and urgency with faith and hope. We cannot but wonder how humanity will take up the challenge of caring for all human life and for all created life as one.